Lots of thermal storage is essential for any combination solar-hydronic system.

The solar thermal industry is one that I have personally had a strong relationship with in my almost 40 year career in the mechanical industry. This relationship started in the early 1980’s, then faded away for over 20 years before coming back to life in the early 2000’s. I wrote about the roller coaster solar thermal market previously in the October 2016 HPAC article “Solar Thermal Runs Hot and Cold.”

I still believe strongly in solar thermal technology and its ability to provide green renewable energy to assist the hydronic heating industry. The solar thermal sector in Canada, as well as other areas in the world, however has suffered a downturn in the last 10 years. Pressure from cheap natural gas prices and the growth of the solar photovoltaic (PV) market have been the two biggest factors that have caused struggles for the solar thermal sector.

Unlike the PV market, which converts the sun’s radiation directly to electrons and electricity, solar thermal has a broader range of uses, collecting the sun’s heat and transferring it to a medium, and that stored energy is then used for purposes including heating and cooling a home. 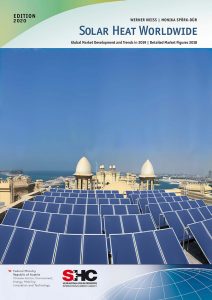 The current state of the world solar thermal market was recently highlighted in the 2020 edition of the report “Solar Heat Worldwide,” published by the International Energy. This report highlights the 2019 global market developments and trends.

In 2019 solar thermal saw shrinking volumes in large markets like China, the U.S., Germany and Australia. Even with this downward trend there is still a great story to tell here. Solar thermal is still a growing market in many regions, has a huge environmental impact, and has a positive impact on jobs.

Certain regions of the world have very strong growth markets including Denmark, Cyprus, South Africa, Greece, Brazil and India. This is still a big industry worldwide with a US$16.9 billion turnover in 2018, providing an estimated 650,000 jobs in production, installation and maintenance.

Solar thermal continues to provide a positive impact worldwide on renewable energy production and climate protection. There was a cumulative solar thermal capacity in operation at the end of 2019 of 684 million square meters of collector area (479 GWth). This provides an annual greenhouse gas emission reduction of over 135 million tons of CO2.

Traditionally the largest segment of the world market was made up of small-scale single family home domestic hot water systems. This has changed as these small residential systems made up only 33% of the new installations in 2018. 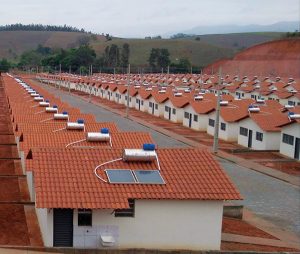 The largest segment of the world market is now from medium-scale domestic hot water applications making up 60% of new installed worldwide capacity. These systems are typically installed in apartment buildings, hotels, public buildings, etc. They usually have a better economy of scale due to their high volume and year-round domestic hot water heating requirements. These types of systems are generally pumped systems, using either closed-loop design with freeze proof heat transfer fluid, or drainback systems using water.

One segment of the solar thermal market I would like to highlight is large-scale systems, as they have become a real success story. There has been strong and steady growth with large-scale systems that are being used for two sectors: district heating and industrial processes. 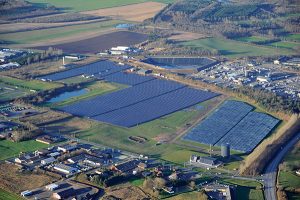 District heating systems are ideally suited to solar thermal due to their large and steady loads. These systems are being installed with massively sized collector fields and huge in-ground storage to provide large percentages of the annual heat required for space heating and domestic hot water heating (see Figure 2).

District heating systems are quite common in Europe, and this is where most of the solar district heating plants are found with almost 300 of these large scale solar systems (>500 sq. m.) now in operation. There is currently only one system in Canada located at the Drake Landing Solar Community in Okatoks, Alberta. It has been in operation since 2007 and consists of 2,300 sq. m. of collectors connected to a borehole storage system. It provides almost all of the heating requirements for a subdivision of 52 homes.

Denmark is the leader by far, not only in Europe but worldwide, in the number of systems and installed capacity. By the end of 2019 a total number of 123 systems with 1,554,973 sq. m. of collector area has been installed in Denmark.

In 2019 alone 15 new solar district heating projects were built in Denmark. Other countries with large numbers of these large-scale systems are Germany (40), Austria (28), Sweden (25) and France (15). China has also started to install more of these systems in the last few years and now has 64 systems.

Most of these large-scale solar installations are large ground mounted flat plate collector fields that are located close to the district heating distribution lines. These systems are equipped with large capacity seasonal thermal storage systems that are either large above ground tanks or in many cases in-ground heat storage. The size of the collector arrays can be enormous with many systems covering between 2,000 to 15,000 sq.m. Denmark has 20-plus systems in the 20,000 to 37,000 sq.m. range, and the world’s largest is in Silkeborg having 156,000 sq.m. of collectors. 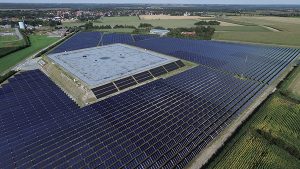 Seasonal storage of the energy from these huge collector arrays is important, as most of the solar energy is produced in the summer and used for heating in the winter. To meet this requirement inexpensive and innovative storage techniques have been developed. For smaller systems typically insulated steel tanks are used, but for large systems either borehole storage or pit heat storage systems are more cost effective (see Figure 3).

Borehole storage uses the heat capacity of the soil to store thermal energy underground. Multiple boreholes are drilled in the ground for the heat exchanger to transfer heat to and from the soil. This type of storage system has been utilized in Drake Landing in Alberta with great success, where they utilize 144 holes each 115 ft. deep.

Seasonal pit heat storage systems are typically constructed by excavating a hole in the ground, lining the bottom of the pit with a waterproof membrane to avoid leakage, then filled with water. The top of the pit will be covered with a floating insulation blanket to slow down the heat loss. They have proven to be relatively inexpensive, effective and reliable solutions for heat storage. 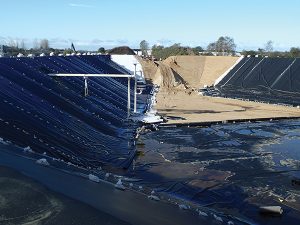 So what lessons can be learned from these large-scale systems by Canadian contractors who are interested in small-scale solar thermal heating system installations?

In my opinion the most important message is all about storage. Lots of thermal storage is essential for any combination solar-hydronic system. In my experience storage is also the most common component that is skimped on when people have installed these systems.

Installing lots of solar panels is the easy part, and some think that more panel area will make for a better system. I have seen this way of thinking proven wrong many times, and it has led to the downfall of many solar heating systems.

The reality is solar storage tanks are expensive, take up a lot of space, and they’re hidden in the basement. Many see this as a simple area to cut corners. The solar panels however will still create heat even without sufficient storage, and this almost inevitably leads to overheating problems: pressure relief valves blowing off, glycol getting cooked and turning to sludge, and collector arrays plugging up.

So learn from these large-scale solar thermal systems and use lots of thermal storage. Why is it so crucial to store energy? Heating loads, whether domestic hot water or space heating, rarely occur at the same time that solar radiation is being collected by the panels. If the storage is not sufficient when the sun is shining, then the whole circuit will overheat causing problems.

Just as important is the loss of potential energy collection, as the system will shut off at its maximum storage tank temperature limit.

The sun is almost ready to set on my hydronic-solar career. I’ve seen the great progress in solar panel technology, solar system components, solar controls and system design knowledge. I hope that solar thermal technology sees another resurgence in Canada.

It’s probably too late in my career for me to take part in it, but I trust there will be other wet heads to take the solar thermal torch and run with it when the time comes. <>

Robert Waters, founder of Solar Water Services Inc. can be reached at solwatservices@gmail.com.