LEAPing ahead in sustainability 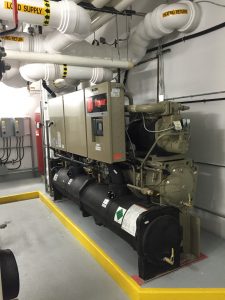 The biggest obstacle was finding a space for the new heat revcovery chiller and for the necessary plumbing.

Sustainability has transformed from a “nice-to-have” aspect for businesses to a core component of operations for many organizations, both large and small. The sustainable use of resources has become a corporate and individual responsibility for many businesses, including property management firm Morguard.
The company sought ways to improve operations at the Coquitlam Centre, a shopping mall housing about 200 shops, a food court and administrative offices. The 1-million sq.-ft., two-level shopping centre is built on 57 acres of land in Coquitlam BC, near Vancouver. Morguard was looking to improve operations at the Coquitlam Centre with the facility’s big cooling load. Because of lighting and occupant load in the shops, there’s a need for year-round cooling while at the same time a demand for heating for ventilation systems.
“I wanted to make the property more efficient and cost effective for the Coquitlam Centre owners,” explains Ken Petherick, operations manager with Morguard. “We previously implemented lighting upgrades and added direct digital controls, but we were looking for a bigger savings.”
During a routine visit, Petherick spoke to Trane representatives about efficiency improvement methods. Since the company knew the centre’s mechanical room configuration–with chillers and boilers housed in the same room–Trane suggested heat recovery as an option to reclaim and reuse waste heat that was being vented into the atmosphere. The waste heat would then be used to heat the Coquitlam Centre, thereby saving energy. Morguard hired SES Consulting to evaluate its energy savings potential.
Trane engineers and SES Consulting worked together to verify design details and the feasibility of the heat recovery system. The team developed a sequence of operations to maximize recovered heat use while compiling energy savings projections.
To get funding, the energy study data was provided to Fortis BC, and Morguard’s operations group included the heat recovery details and budget in its capital plan. The heat recovery system uses a heat reclaim chiller. Used in heat recovery mode, the chiller generates leaving condenser water temperatures as high as 60C.
SES Consulting proposed a cascade heat recovery chiller (HRC) that would reject waste energy into existing heat water systems instead of facility cooling towers. The HRC would provide 60C hot water to air handling unit coils, increasing the efficiency of the existing chillers and reducing water consumption.
The scope of the work also included replacing leaking AHU coil valves and adding speed drives on major heating pumps. The project was commissioned in February 2016.
The existing plant had a constant volume hot water plant fed by two 6.0 Mbtuh natural gas boilers. This hot water is supplied at 40C and 60 to 70C to two systems of the mall, the old and new malls, respectively (the mall was built in 1979 and expanded in 2001). Since the old mall runs at 40C, it previously ran on a heat exchanger to keep the temperatures lower. The new heat recovery chiller project re-piped the heating supply system to run in series. This way, the water at 60 to 70C goes to the loads of the new mall first and the cooler return water is then mixed as needed and supplied to the 40C old mall.
This piping design allowed the existing heat exchanger to be removed. All distribution pumps were switched from constant flow to variable flow in order to pump only the water that’s needed. The heat recovery chiller intercepts the return water from the mall and reheats it before it enters the boiler. On average, the entire mall can be heated solely by the heat recovery chiller down to 2C, after which the boilers run simultaneously to top it off.
Challenges
Despite its success, the project did not come without some challenges. The biggest obstacle was finding a space for the new heat recovery chiller as well as for the necessary re-piping. This was handled by relocating and downsizing the existing air compressor system, allowing room for the new chiller as well as reusing existing piping from the old heat exchanger system and taking advantage of new technology, as new components are smaller. Success came from thinking the project through and ensuring the right parties were involved from the beginning.
The project is also on track to meet Morguard’s project criteria with a payback timeframe of four-and-a-half years, which is shorter than the original seven-year estimated payback. Based on projected energy savings, the upgrade has also earned an incentive from Fortis BC to help fund the heat recovery improvements.
Results such as a 70-per cent reduction in annual gas consumption, a four-per cent reduction in electricity and 35 per cent lower GHG emissions from the new HRC system has earned Morguard its third consecutive award for leadership in environmental advancement.
The company was recognized by the Healthcare of Ontario Pension Plan (HOOPP) through its Leadership in Environmental Advancement Program (LEAP) Awards, winning the Sustainability Innovation–Technology Award for the Coquitlam Centre’s HRC due to how replicable the system is and its short payback period. Overall, the company has earned 12 LEAP Awards across eight categories since the program’s inception in 2012.
“The equipment is certainly doing its job,” says Petherick. “We do water harvesting on the roof and collect make-up water. With the more efficient cooling towers not running as much, most of the water we collect is rain water.”
The project has also provided a lot of satisfaction, notes Petherick, who adds that it was a team effort. “It has been one of the most energy efficient projects I have worked on and the results are going to be amazing.”