Look for the Opportunities

In a year of complications and unforeseen twists, where there’s a will there’s a way. 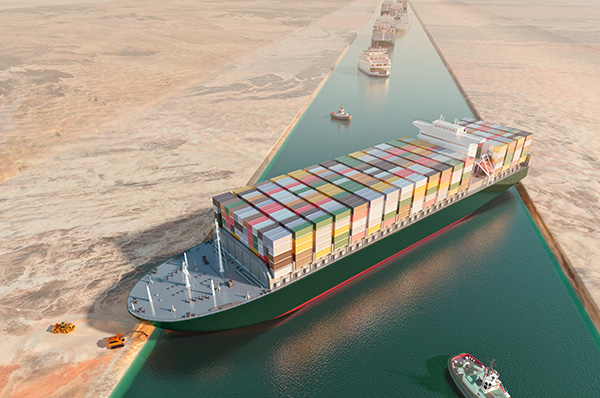 In March a container cargo ship was stuck in Suez Canal, blocking the world’s busiest waterway.

I was standing outside of my local pizza joint recently, waiting for my order, when I heard a voice call out my name from across the parking lot. I looked around and saw Tom, someone I first met over 40 years ago.

Back then I was not even an apprentice plumber; I was just working with my dad until I figured out what I really wanted to do. Most mornings my father and I would stop at the local plumbing wholesaler where Tom was working the counter; something to do till he went to university and figured out his future.

We were 18 or 19 years old, neither of us envisioned nor planned a career in the plumbing industry, and here we were still going with over 80 years of collective experience—Tom now a senior executive at the same company he started with, and I am just senior.

It was nice to catch up. He is still having fun and his passion and enthusiasm for the business was evident.

One of the things we spoke about was the unprecedented challenges the pandemic has created in our industry—specifically, material shortages and ever-lengthening lead times on virtually everything. We traded examples and remarked how we could never have imagined shortages on such everyday “bread and butter” type items.

I won’t mention specifics, but I am sure most if not all of you readers have experienced this first hand, and not just plumbing; these supply chain issues are creating challenges for pretty much every industry. Items that had lead times of two to four weeks in the past are routinely now eight to 12 weeks away.

Normally I would have been braced for a harsh response when delivering news of lead times this long, now most customers react with a knowing shrug. It’s not that they don’t care, it is simply an indication of how pervasive the problem is and how low expectations have become.

So how did we get here? Can we simply put all of the blame on Covid 19? The short answer is, there is no short answer. We are all a part of a global economy that is intricately connected, and the supply chain that feeds it needs to operate with a complicated synchronicity.

If you remember back at the beginning of this global pandemic, many businesses were forced to close or slow production. This was the first jolt to hit the global supply chain knocking things out of sync. Granted, this was over a year ago, but the closures and slowdowns stretched to weeks and months with every jolt causing a ripple effect.

To make things worse, manufacturing of goods was not the only thing that was affected, shipping also saw massive disruptions. When our global economy is in full swing, more than 5,000 ships can be floating on the oceans carrying upwards of 20 million shipping containers, filled with every type of consumer good. The majority of these goods originate in Asia, with China home to seven of the 10 largest container ports worldwide.

The early days of the pandemic saw China virtually shut down for two months. Shutdowns in Europe and North America followed, but demand for household consumer goods actually increased as people were shut up at home. That coupled with a spike in demand for medical supplies that saw a significant surge in shipping once China opened up again. The sudden surge in shipping resulted in backlogs and congestion in the receiving ports in North America. This bottleneck in shipping is still responsible for many delays we are experiencing today, and I have not even mentioned the chaos that resulted when a massive container ship got stuck in the Suez Canal back in March.

If these Covid-related disruptions are not enough, we also saw a significant weather-related disruption when the freak winter storm hit Texas, a State not prepared for the deep freeze temperatures they were subjected to. Much of the electrical grid went dark, which shut down gas production, which further hampered electrical production since natural gas is the main fuel source for electrical generation in Texas. Talk about ripple effects.

Texas is also home to many of the petrochemical plants responsible for much of the world’s plastic resin production. Theplasticsexchange.com estimated the Texas storm cost the plastics market 5 billion lbs. of resin. I have no idea how much of the total market that represents, but I’m sure if you take away that much of raw material from any industry you are going to see shortages in finished goods somewhere. And since plastic resin is required to make plastic pipes and fittings it is easy to understand some of the shortages our industry is experiencing today.

So when will we see the end of this? Well, I wish I could tell you to just be patient for a little while longer however things may get worse before they get better. It appears government stimulus spending, pent up consumer demand and increased vaccination rates are leading to a significant economic recovery. Business is actually quite busy. Increased demand will place even more strain on an already stressed system. We will continue to see shortages and longer lead times for months, perhaps even longer.

I will conclude with an important thing to keep in mind: with challenges come opportunities. My friend Tom seemed excited and energized by the challenges, and I agree. How we respond is up to us. Savvy contractors will look for alternative products, methods and suppliers to get things done. Motivated suppliers will look for options as well, and will step into the service void to win new customers.

Now is not the time to be complacent, shrug our shoulders and accept the uphill battle of the “new normal” of long lead times. Now is the time roll up our sleeves, get to work and see what gold lies in them there hills.  <>