Mastering the art and science behind ideal environments 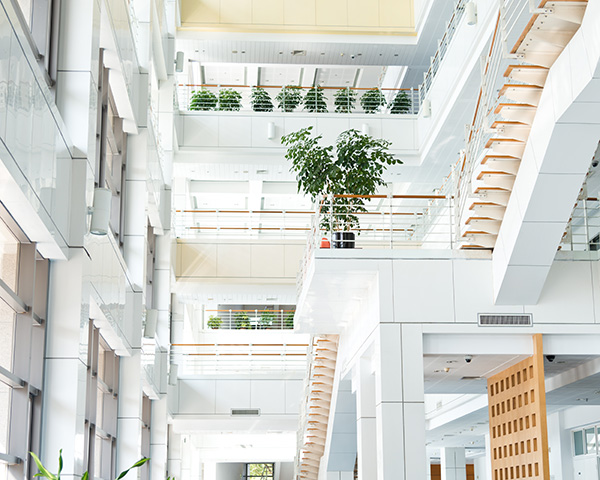 Inconsistencies in space and surface temperatures can occur where multiple elevations exist off a single floor space.

This continues to shock many readers but as I have said repeatedly the construction industry does not exist to employing building professionals. The industry exists to create spaces for humans because without shelter for protection we would not be able to populate many parts of the world. When it comes to buildings it all comes down to Maslow’s hierarchy of needs where food and shelter are basic essentials and the final stage manifested through self-actualization. In architecture, self-actualization is expressed through creative forms and interior finishes.

But here’s the thing, creative forms and interior finishes are not sufficient for creating ideal environments–supplementary solutions are most always necessary to condition indoor spaces. This explains the existence of lighting and HVAC systems. These take on many forms from meeting mandatory minimum requirements established by building codes, to voluntary compliance to higher requirements identified by programs such as Well, Living Building Challenge or Active House.i In the former neither comfort nor energy are the priority, being trumped by basic needs of safety and reducing risk of illness. In the latter it is assumed the former is a prerequisite to support much higher aspects of human factor design (self-actualization) and earth stewardship.

Alternatively the designer could lead the client to a multi-zone system, which based on good practice, considers the space dynamics due to wind, precipitation, solar loads and enclosure performance; and occupant’s metabolic rate and clothing and tactics which promote adaptive strategies.iii

If compliance to comfort standard ASHRAE 55 is desired (and why wouldn’t it be) then separate calculations according to the Standard are necessary. To precede with comfort calculations two approaches are considered. Use a multi-zone systems approach or design and construct a building of such high performance that single or minimal zoning is sufficient.

Tactically it considers the following as good practices:

How a building is orientated on a parcel of land will affect precipitation, wind and solar loads on exposed above grade surfaces or unexposed below grade surfaces. These mass and energy loads are then transmitted to the interior spaces through differentials in moisture, pressure, and temperatures. Surfaces and spaces that receive extraordinary loads ought to have their own comfort controls.

Examples of these are southern facing rooms with large window to wall ratios and finished with interior blinds and without exterior shading. These southern surfaces will receive relatively large amounts of shortwave radiation which depending on solar heat gain coefficients could influence the space conditions differently than other spaces. If the southern space had the only thermostat and was combined with (for example) northern facing rooms it is possible that under heating could occur in the north spaces during some periods. This is due to the thermostat shutting down the heating system due to a rise in temperature from the solar load.

Likewise, if the north space had the thermostat it is highly likely that the southern spaces will overheat. This is due to the thermostat remaining on to satisfy the setpoint but cannot pick up the temperature rise in the south facing rooms. It is important for designers to develop this, “if/then” understanding and herein (in part) lays the art of zoning.

CHANGES IN ELEVATION OR GEOMETRY

Any time there is changes in elevation such as in a multi floor building there could be thermal consequences due to stack effect. This will result in stratification where warmer air temperatures accumulate in the higher floors and colder temperatures at lower floors due to convective flows. There can also be inconsistency in space and surface temperatures where multiple elevations exist off a single floor plate (ex. vaulted ceilings mixed with flat ceilings) or where floor plates change direction (L-shaped rooms exposed to different solar loads) or are separated (for example) by stairwells or elevator shafts. For these reasons floor plates of different geometry, separation or with different elevations should not be combined, as a single thermostat cannot accurately represent the different conditions that may exists. 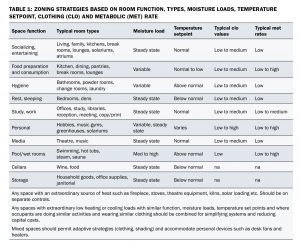 There is frequent control conflict when rooms of different use and purpose are assigned to a single control point. Consider the metabolic rate, clothing and pattern of an occupant in a specific space relative to occupants in other spaces; and consider what heat and/or moisture sources might be present in one room but not in another. Also consider the location and types of control employed in one space but not others this includes shading, fans, heaters and building management systems. In addition, there could be any number of mixtures of spaces, people, lights and equipment operating at any time. Any combination of the above could cause conflicts if the entire building is treated as a single zone. Good practice suggests rooms of unique characteristics and use each be considered for separate controls as described in Table 1.

‘The importance of interior systems on indoor environmental quality and energy use cannot be overemphasized. This includes effects of short wave radiation and moisture on finishes (outgassing) and effect of surface treatments on heat transfer.iv The latter has significant consequences for designers of radiant floor systems. For this reason zones of similar flooring conductivities with similar fluxes should be grouped together.
Another way of stating this is zones with different floor conductivities and fluxes should not be controlled with the same control system. In practice the radiant system (tube spacing) along with the flooring conductivities (U values) and enclosure design (ACH and U values) should be manipulated to harmonize the necessary fluid temperatures to the least number of required profiles.

There is in practice a conflict between zoning, controlability and economics. Consider the entry level, two-storey home with a single furnace and thermostat. In a “built to code” house it is almost impossible to comply with ASHRAE Standard 55 due to the thermal dynamics in the home.

Solving the non-compliance issues by zoning and enclosure improvements often makes the building noncompetitive relative to the market for entry level structures. Until the benchmark for entry level products changes, industry will always have non-compliance complaints. Simply put if the industry wants to reduce the complaints stop doing bad buildings.

Good buildings with flexible policies around adaptive strategies can have simple single or simpler multi-zone systems because the occupants, building and finishes solve many of the thermal problems often associated with bad buildings.

Zoning in and of itself is not a single solution to comfort problems. Anyone making this suggestion does not fully understand the relationships between people and buildings. Understanding how spaces respond to exterior and interior stimuli and how these relate to occupant needs and preferences for space conditions helps develop the designer’s art of zoning but the art first must be based upon the sciences of physiology, psychology and buildings.v