Fresh faces, along with mechanical and design tweaks, are hallmarks of the 2016 service vehicle offering

Fierce competition in the auto industry is always great news for buyers. Segments that were previously modernized infrequently, such as service vehicles, are now updated far more often in response to customer needs.

Most of the 2016 vehicles underwent minor changes, and there are some fresh faces. Nissan offers two new versions of its Titan pickup truck, while Ford has released details of its new Super Duty. Toyota has redesigned the Tacoma, and Mercedes-Benz offers the new Metris.
Full-size vans and trucks remain the choice for most contractors, but there is also a range of midsize and compact vehicles for lighter-duty work, such as service calls. 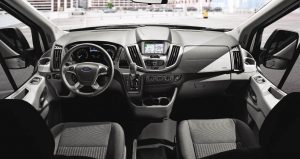 For large fleets, an available telematics system on the Transit records location, speed, fuel efficiency, oil life and other information.

An all-new addition to Ford’s lineup in 2015, the Transit is updated for 2016 with dual sliding doors available on some models, available LED interior lighting, and an improved communications and infotainment system. This van takes the place of the now-discontinued E-Series (Econoline).
Engine choices are a 3.7-litre V6, making 275 hp and 260 lb.-ft. of torque, which can be ordered with CNG or propane prep; a turbocharged EcoBoost 3.5-litre V6 making 310 hp and 400 lb.-ft.; and a 3.2-litre five-cylinder diesel making 185 hp and 350 lb.-ft., all with six-speed automatic transmissions.
The Transit comes in two wheelbase lengths, three body lengths, three roof heights, and single or dual rear wheels. Interior volume ranges from 246.7 to 487.3 cubic feet, with a maximum payload of 4560 lbs. and top towing capacity of 7500 lbs. Maximum load height is from 56.9 to 81.5 inches. 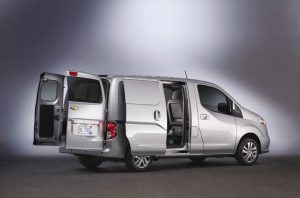 The “mechanical twins” of the Chevrolet Express and GMC Savana get some new features for 2016. These include side and front window airbags, six D-ring tie-downs, and OnStar with a WiFi hotspot for up to seven devices. A 220-amp generator and dual isolated battery system are offered.
Available in 2500 or 3500 configuration, the Express/Savana offers a 4.8-litre V8 making 285 hp and 295 lb.-ft. of torque; a 6.0-litre V8 making 329 hp and 373 lb.-ft. that can be prepped for CNG; and a 6.6-litre Duramax V8 diesel making 260 hp and 525 lb.-ft. All use six-speed automatic transmissions.
There is one roof for both, with maximum 53.4-inch cargo height, but the 3500 also has an extended-length option.
The Express/Savana is the only non-European-style van left on the market, and while its basic design has not changed in more than a decade, its features have been regularly updated and its price remains competitive.

The first of the Euro-style vans to hit our market, the 2016 Sprinter upgrades include standard side and window airbags, and a locking glove compartment. All-wheel-drive models now include low-range gear, which was previously optional.
The Sprinter cargo van comes as the 2500 in standard, high and super-high roof, and as the 3500 in high and super-high roof, both in three lengths. Both are also available with a 4×4 drivetrain.

With the launch of competitor models, Mercedes-Benz has added more Sprinter sales and service outlets.

Powered strictly by diesel, the Sprinter uses a 2.1-litre four-cylinder making 161 hp and 265 lb.-ft. of torque, or optional 3.0-litre V6 that makes 188 hp and 325 lb.-ft.
Interior height varies from 66.5 to 87.3 inches, and cargo volume from 319.1 to 586.1 cubic feet.
With the Ford Transit’s introduction, Mercedes-Benz has added more sales and service outlets, and the scheduled maintenance interval is now 30000 km. The 4×4 model, intended for muddy job sites, is surprisingly capable. 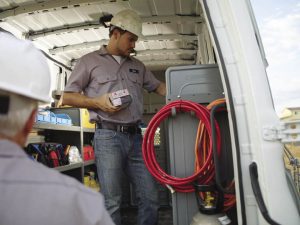 Unchanged for 2016, Nissan’s NV is available in 1500 configuration with a standard roof, and as the 2500 or 3500 in standard or high roof. All models come in a single length.
Two gas engines are available: a 4.0-litre V6 making 261 hp and 281 lb.-ft. of torque, or a 5.6-litre V8 making 317 hp and 385 lb.-ft., both with a five-speed automatic.
Maximum payload is 3985 lbs., while towing is 9500 lbs. The top cargo height is 76.9 inches, and the highest cargo volume is 323.1 cubic feet. The NV’s pickup-truck-based design provides deeper footwells for long-legged occupants than most vans. Available features include a locking centre console sized for hanging files, rear parking sensors and navigation. 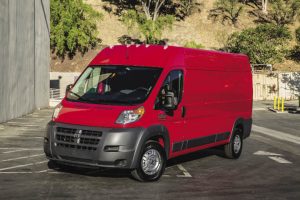 The Ram ProMaster is the only full-size front wheel drive van which reduces overall weight.

For 2016, the ProMaster adds available 20-amp auxiliary dash switches and a second battery prep. It comes in 1500, 2500 and 3500 configuration, and with three wheelbase lengths, four body lengths, and two roof heights. Maximum cargo volume is 462.9 cubic feet, while interior height stretches as high as 76 inches.
Its gasoline engine is a 3.6-litre V6 making 280 hp and 260 lb.-ft. of torque, mated to a six-speed automatic transmission. The diesel option is a 3.0-litre four-cylinder making 174 hp and 295 lb.-ft., with an automated manual six-speed.
The ProMaster’s numerous configurations offer lots of choice, and its squared-off sides maximize space right to the roof. An extremely tight turning circle improves manoeuvrability. The diesel’s transmission works like an automatic and has no clutch pedal, but it shifts harshly, and drivers must remember to set the brake as there is no “Park” position. 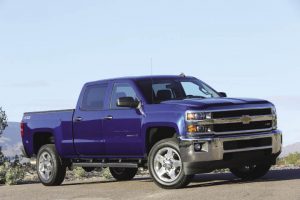 Mechanically similar, the Chevrolet Silverado and GMC Sierra 1500 models receive new front-end styling for 2016, and the available 5.3-litre V8 now uses an eight-speed automatic on some trim levels. Heavy Duty trucks get digital steering assist on some crew cab models to improve stability and steering feel.
All are available in regular, double or crew cab, and in 4×2 or 4×4 configuration. The 1500 models offer a 4.3-litre V6 (285 hp/305 lb.-ft. of torque), 5.3-litre V8 (355/383) or 6.2-litre V8 (420/460), with six- or eight-speed transmissions. Heavy-Duty models use a 6.0-litre V8 (360/380) or 6.6-litre V8 Duramax diesel (397/765).
Maximum numbers are dependent on a variety of factors, but the 1500 tops out with a 2260-lb. payload and 12000-lb. towing capacity, while Heavy Duty models can pull up to 20000 lbs.
While the current crop of trucks tows and hauls well, GM’s HD models seem to do everything just a bit better, especially with the diesel/Allison transmission combination. The bumper-end step found on almost all GM trucks is also the simplest and easiest for access to the bed. 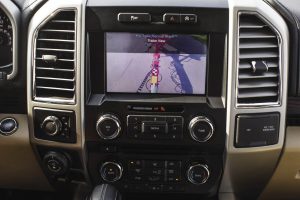 The F-Series remains the best-selling vehicle in Canada. The F-150 now has available Pro Trailer Backup Assist, a self-parking feature that enables any driver to back up a trailer regardless of skill level. The current Super Duty will be replaced later this year with an all-new 2017 model that, like the F-150, will have a high-strength-steel frame and aluminum body. Full details are not yet available, but expect updated versions of the current Super Duty engines, along with a blind spot monitor that includes the trailer’s length, and a trailer-mountable backup camera that beams images into the console screen.
The F-150 offers two naturally-aspirated engines, a 3.5-litre V6 making 282 hp and 253 lb.-ft. of torque, and a 5.0-litre V8 (385/387), plus two turbocharged EcoBoost engines: a 2.7-litre V6 (325/375) and 3.5-litre V6 (365/420). New for 2016, the V8 can be prepped for CNG or propane. All use six-speed automatic transmissions.
The current 2016 Super Duty uses a 6.2-litre gas V8 (385/405) or 6.7-litre diesel V8 (440/860). The F-150 has a maximum payload of 3270 lbs. and top towing capacity of 12200 lbs., while the Super Duty rates a maximum 7050 and 31200 respectively.
The idea behind EcoBoost is a fuel-efficient smaller engine with larger-displacement power, but be cautious. It uses more gas under load than the published figures promise, and frequent towers may be happier with a non-turbo version.

Nissan’s all-new Titan is being rolled out gradually, starting with the 2016 Titan XD, and then with the 2017 half-ton. The two look similar but sit on different frames, and the XD’s wheelbase is almost a foot longer. Nissan says it bridges the cost and capability gap between light- and heavy-duty competitors.
The XD uses a 5.0-litre V8 Cummins diesel, making 310 hp and 555 lb.-ft. of torque, with six-speed automatic. A 5.6-litre V8 gas engine, making 390 hp and 401 lb.-ft. and with seven-speed automatic, arrives later in the model year. The half-ton will offer V6 or V8 gas engines.
The diesel-powered Titan XD has a maximum payload of 2500 lbs., and a top towing capacity of 12000 lbs. Available features include a rear hitch alignment camera, and one-person remote brake light check for the trailer’s lights and signals. Eagle-eyed readers will notice the XD’s maximum capacity equals that of most half-ton competitors, but its ease and confidence with the heaviest loads could make the difference for buyers. 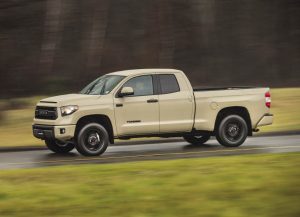 Toyota’s full-size pickup is basically unchanged for 2016, having received a makeover two years ago.

The Tundra’s makeover improved its exterior and interior styling, including a more user-friendly control layout. Mechanical updates were minimal, however, and its larger V8 is among the thirstiest of its competitors. 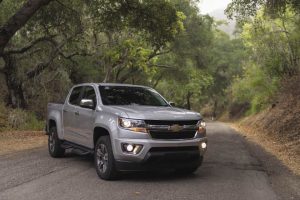 For 2016, the mechanically-similar Chevrolet Colorado and GMC Canyon get a new available 2.8-litre Duramax diesel engine, producing 181 hp and 369 lb.-ft. of torque, in addition to a 2.5-litre four-cylinder or 3.6-litre V6. Diesel-equipped models can tow up to 7700 lbs.

It is thirsty and overdue for a makeover, but the Frontier offers 281 lb.-ft. of torque from its 4.0-litre V6 (a four-cylinder is also available) and can tow up to 6500 lbs. 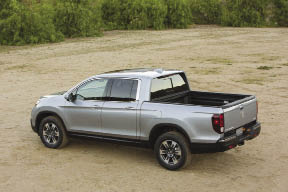 The 2017 Honda Ridgeline may work well for some as a service vehicle.

While not generally considered a work truck, the SUV-based Ridgeline still sees some commercial use. An all-new 2017 version will have conventional truck styling, 3.5-litre V6, all-wheel drive, and exclusive dual-opening tailgate. 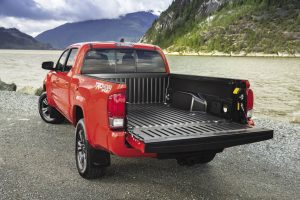 The all-new 2016 Toyota Tacoma has a lockable and reinforced tailgate for longer loads.

All-new for 2016, the Tacoma comes with a 2.7-litre four-cylinder or 278-hp, 3.5-litre V6 with fuel-saving Atkinson-cycle technology. Towing capacity is now up to 6500 lbs. and payload rises to 1500 lbs, with a reinforced tailgate for longer loads. Standard equipment includes knee airbags, locking tailgate and heated mirrors.

CHEVROLET CITY EXPRESS/NISSAN
While each has unique styling, this van is built by Nissan for both Chevrolet and Nissan. It uses a 131-hp, 2.0-litre four-cylinder engine with continuously variable transmission (CVT), and offers 122.7 cubic feet of cargo volume with up to a 1500-lb. payload. Maximum cargo height is 53 inches. Chevrolet offers it through a wider dealer network and includes free oil changes, but Nissan’s version has a better warranty. 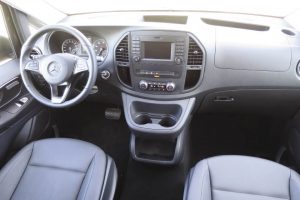 The new Metris is currently the only midsize van available. It uses a turbocharged 2.0-litre four-cylinder gas engine making 208 hp and 258 lb.-ft. of torque.

There is up to 186 cubic feet of cargo volume, maximum 2502 lbs. payload, and an underground-parking-friendly overall height of 74.4 inches. A power-sliding door is available.

Jil McIntosh is an automotive writer and reviewer, with a specialty in trucks and commercial vehicles. She writes for numerous outlets including the Toronto Star and Autofocus.ca, and is a member of the Automobile Journalists Association of Canada (AJAC). Her work can be found at WomanOnWheels.ca.