Wireless technology has been around in our businesses for at least three decades, or perhaps even longer. The first wireless devices I recall were thermostats that eliminated the wiring between the thermostat location and the mechanical equipment it controlled. Using radio frequency, the thermostat would communicate with a base unit that had all of the relay switches within to turn a device on or off with some control logic. The intent was labour savings and flexibility.

In these early stages, some of these wireless systems might have had some challenges with its communication being spotty or inconsistent throughout all the different building materials used. But just like any technology, a lot of advances have been made since then.

In more recent history, wireless technology has come a long way and is now pretty solid and can be found in all of our homes in one form or another. Some examples include wireless Wifi, wireless telephones, appliance remote controls, security, and HVAC control systems and components.

The future of our industry will become more and more wireless and the number of increased wireless controls and sensors now available show a strong upwards trend. But despite this change, many of the seasoned tradesmen and women are still somewhat unsure about the reliability of the technology and continue to run wires where wireless technology could now easily take its place. It is time that we comfortably move forward with this technology, just like we have done with many others in the past.

Many of our industry’s leading controls manufacturers offer their version of wireless communication and networks from single thermostat controls to complete control system solutions with wireless sensor technologies. There are far too many to name them all, but for your interest, here are a few for you to look into. All of them have stellar solutions that are worth your time investigating.

Those companies include, but again are not limited to, the following: Watts/tekmar, Salus North America, HBX Control Systems, Uponor, Taco Comfort Solutions, Delta Control, Reliable Controls, KMC Controls, and so on.

Apart from those traditional control systems, there are some mechanical components available today that allow for wireless access points in order to provide real-time control, diagnostics and reporting of history and performance, and setup/programming capabilities. Those devices became the exception rather than the rule and include boilers, pumps, process devices and similar products. This is commonly done through Bluetooth connectivity of a mobile device such as phones or tablets.

Now back to control systems. What wireless control system technologies are available? Not limited to these, but most commonly you will find WiFi, ZigBee or EnOcean.

WiFi operates in the industrial, scientific, and medical (ISM) frequency bands and is capable of data rates around 300 MB/sec. The data rates of a WiFi network are easy enough to support a very large Building Automation System. Because this technology is so widely used, it is easily managed and maintained by most IT personnel. The disadvantage of WiFi is it is a more expensive technology to deploy and it consumes considerably more power than other systems.

ZigBee is a widely accepted wireless protocol used in the building automation industry. This level of acceptance typically keeps development and deployment costs lower than other protocols. The ZigBee standard specifies a maximum data rate of 250 kB/sec across a self-forming meshed network.

Since Zigbee uses low data rates, the corresponding power consumption is also low and results in a long battery life. ZigBee operates in the same frequency bands as WiFi but can co-exist with WiFi networks when properly configured.

Most wireless controllers, repeaters, and sensors require some sort of power. The power is typically wired for Wifi and batteries for ZigBee devices. Most battery-operated wireless sensor devices have a battery life between four to five years. Battery life can vary based on the distance the information needs to be communicated, how much of it is being transmitted or received, and how often the communication occurs.

Wireless systems are required to have the same level of reliability as wired systems. These networks need to send and receive data continuously with minimal communication error. With proper planning and implementation wireless networks can be as reliable and secure as a wired network.

A mesh network is a scalable network architecture where any device in the network can communicate to other devices by “hopping” over multiple access points. This allows the system to provide coverage over a much larger area, avoid single points of failure, and deliver high capacity communication when needed. The network can be considerably less susceptible to interference and environmental conditions than a single access point can provide.

Of course, the building’s construction characteristics must be considered during the design and layout of a wireless network. Construction materials and obstructions can have an impact on wireless performance. These factors determine the allowable distances between transmitters, receivers, and the number of repeaters that may be required throughout larger buildings. Drywall and wood are excellent media for wireless communication. Signal loss through concrete can depend on its thickness and rebar spacing.

Signal loss also can be impacted by the quantity and type of steel superstructure, elevator shafts, and other metals used in construction and building geometry. All of these factors need to be considered and accounted for in project design specifications and construction drawings. Typically, the number of repeaters and transmitters will increase if there is more concrete and steel in a building. 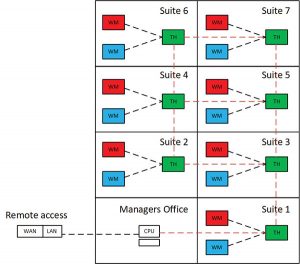 More and more manufacturers seem to be partnering with wireless technologies within their devices in order to allow for easy and automatic meshing utilizing devices in the building as repeaters for another. Figure 1 shows an example based on a building I was in recently.

In this particular building a wireless mesh network was established using devices from a water metering supplier and then wireless thermostats from another supplier. There, the multi-family building utilized wireless water meters for each suite, as well as a wireless communicating single thermostat for each.

The water meters and thermostats throughout the building create a wireless mesh network, which uses each other’s devices as repeaters so in the end all thermostats can communicate with one another as do the water meters. Both of these different use/purpose control systems now talk to a main building computer platform that can schedule, monitor, maintain and centrally manage the access to each of those devices throughout the building. It may also even make that available to the outside world via remote access capabilities through a Local or Wide Area Network (LAN or WAN).
Red boxes represent wireless hot water meters, blue boxes represent wireless cold water meters and the green boxes represent wireless thermostats. All devices mesh together into a single network that all feeds back into a local computer platform to allow monitoring and data logging for all three devices per suite, as well as remote adjustment to comfort settings in the thermostats.

This is a very small example of what wireless controls could mean for your business moving forward. Other appliance manufacturers are also looking to the future with wireless communication in mind. Before we know it, buildings will automatically have a communication mesh established through those.

Dropping in additional wireless HVAC devices will just become a part of the existing network. We might still be six to eight years away from that, but considering what I see being promoted for the upcoming ISH Trade Fair in Frankfurt, Germany, it might not be that long at all. <>

Mike Miller is director of sales, commercial building services, Canada with Taco Inc. and a past chair of the Canadian Hydronics Council (CHC). He can be reached at hydronicsmike@tacocomfort.com.