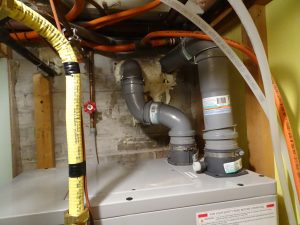 Venting would prove to be a significant factor in choosing the replacement.

Friends of mine were recently faced with a decision when their combination boiler/DHW heater refused to provide either. Now this should not have come as a complete surprise as the unit frequently needed servicing over the past few years and parts availability was getting difficult.

They had spoken to me about it at least a couple of times over those past few years; surely I must have given them the best possible advice and helped them plan for just such an occasion?

The replacement equipment would have been researched and selected; considering how busy contractors are, the contractor would have been chosen and booked well in advance. Complete mechanical room retrofits do not typically happen overnight so of course this type of work would be scheduled for the warmer months when the heating is not required, certainly not during the cold winds of November?

Ideally, the switch out would be done during a week when my friends were sunning themselves on a beach in the Bahamas so they need not face the prospect of cold showers, or begging favours from neighbours who had fully functioning systems.

Yes, surely this is how all boiler room retrofits go down? Perhaps in a perfect universe dear readers, but alas it was not to be here in the real world. 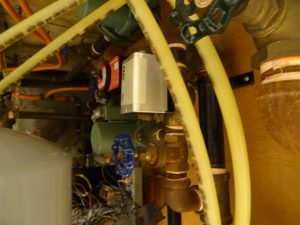 Space was tight in the closet sized room-fortunately the owner had installed removable walls.

As I mentioned, we had spoken a couple of times over the past couple of years about the need to upgrade their old combination unit. In its day it had been a state of the art, innovative product, designed to provide space heating and DHW water to an average-sized single family home. It was installed about 15 years ago, before the introduction of the more efficient modulating and condensing appliances that are so prevalent in today’s market.

At the time it was probably the best product available to meet the requirements of hydronic space heating and DHW for a family of three. It did so in a compact all in one package utilizing a unique “tank in tank” design. The compact all in one design had allowed them to make more room in the basement for a TV/family room, and they were not willing to give up any of this new real estate.

On the surface this does not really appear to be a tall order in today’s marketplace. The compact box on the wall that can supply all the hot water and heating a family might need is in great demand these days. The concept is very appealing to homeowners, homebuilders and mechanical contractors alike. 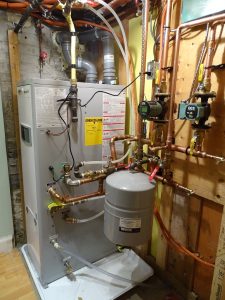 The new unit had a built in primary circulator, so one pump was eliminated.

It seems to me that the bigger we build houses, the smaller the space we want to allocate for mechanical equipment. Recognizing this market demand, there are a plethora of companies offering up a myriad high efficiency combination appliance options capable of meeting these requirements. However, the one thing most of these offerings lack is storage capacity.

The old combo unit had a significant volume of water on both the DHW and closed loop heating sides of that tank in tank design. The vast majority of today’s combo appliances contain very little or no water on either side.

Why do you want storage capacity? I have written about this before and my opinion has not changed, short cycling is an efficiency killer and one of the best ways to overcome short cycling is through adding mass, or volume to the system or the appliance.

Every boiler room in my aforementioned perfect universe would have not one but two boilers, one for redundancy. These would be connected to a storage type indirect HWT on the potable side and to a buffer, or mass tank on the heating side. The problem with my perfect world is all this added mass or buffer or DHW storage requires space and as we have already discussed space in mechanical rooms is a disappearing commodity. As you can see in the accompanying images, there was not a lot of space available in the mechanical closet either.

Not to be deterred, we examined the many options available, determined to find something that could offer at least a modicum of storage capacity. Time was not on our side, it was after all November in Canada, albeit a milder than usual November. Still, we all knew those cold winds would not hold off forever, and worse, showering their way around the neighbourhood was loosing its charm.

We thought we had found what we were looking for from one well known, high end manufacturer who offered an all in one unit that incorporated a small indirect tank and a modcon boiler pre-piped together in a nice package resembling a refrigerator. Unfortunately, the unit was about an inch too high to allow it to be vented easily through the side wall.

Another contender was eliminated as an option because it was not available fast enough. 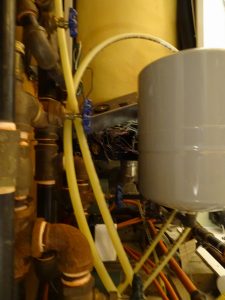 Finally, we decided on a floor mount combination unit that incorporates a small indirect storage heater and medium mass firetube style boiler with a 10:1 turndown ratio modulating burner. The exceptional turndown ratio combined with the medium mass water volume of the firetube design helps to minimize the short cycling.

Similarily on the DHW side, even though the storage capacity is relatively small, a few gallons is much better than none and it allows small draws of water without firing the burner. The true “on demand” style that is still prevalent requires the burner to fire on every single draw of hot water no matter how small. It may seem like a small point but it can add up to significant differences in efficiency and durability.

Now that we had selected and obtained the appropriate appliance, the hard part was over. All we had to do was call up one of the many skilled and licensed contractors who are sitting around with nothing to do, just waiting for such a call. Maybe I am dreaming up that elusive perfect homeowner universe again?

Fortunately my friends were able to contract Tom from High Mountain Mechanical to do the work in a somewhat timely manner. Tom had previously done work for them at another property so they were familiar with him.

The compact all-in-one package in the original system utilized a unique “tank in tank” design.

The deltaT circ on the convector zone would vary the flow to maintain a steady 20 degree temperature change between supply and return lines. On colder days when the heat load increased, the pump flow rate would increase to keep pace. The deltaP pump would automatically adjust based on the varying pressure drops as thermostatic valves opened and closed.

The new unit had a built in primary circulator, so they were able to eliminate one pump. High Mountain Mechanical managed to fit it all into the original space and had everything up and running before the cold winds of November ushered in the blowing snow and sub zero temperatures which hit in early December, just the way the real world plan intended all along.