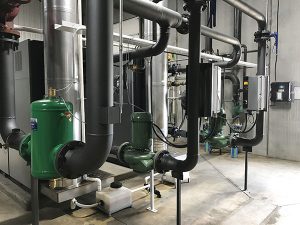 It has taken almost 20 years for condensing boilers to gain the market share and acceptance they have today. There have certainly been many issues to overcome, including product reliability problems, control interface issues, along with piping, venting and condensate challenges. There has also been a substantial learning curve for specifying engineers and installing contractors.

The market has responded with a vast array of new products with many innovative features to address previous issues. New design strategies and installation techniques are commonly used to simplify projects. Not that all issues have disappeared, but in general the multiple condensing boiler plant market has certainly reached a maturity level.

To understand the popularity of these new products it is important to look at older boiler plants and how they operated. Many older boiler plants consist of one or two large power-fired or atmospheric boilers. They typically have high water volume, are operated with constant flow and constant high temperatures (usually 180F to 200F) and run with a simple set point control.

Increased operating efficiency: Design conditions in most areas exist for less than five per cent of the heating season. Multiple smaller boilers are able to more precisely meet the lighter heating load in the shoulder seasons. Smaller boilers with modulation burners will operate for long run cycles, eliminating many wasteful on-off burner cycles. A modern condensing boiler also has the benefit of being more efficient due to enhanced condensing effect when running at part load.

Building load turndown: Boiler efficiency plummets in large non-condensing boilers when the duty cycle drops below 35 per cent. Most condensing boilers have at least 5:1 turndown ratios and operate very efficiently at low firing rates. When installed in multiples the boiler plant has the ability to match the load precisely under all conditions. For example, if a boiler can modulate from 150,000 Btuh down to 30,000 Btuh, four such boilers together could fire from a maximum of 600,000 Btuh to a minimum of 30,000 Btuh, a turndown-ratio for the plant of 20:1.

Redundancy: Multiple condensing boiler plants will typically consist of two to four wall mounted or floor standing boilers. If one of the multiple boilers goes down, the remaining boilers will almost always have sufficient capacity to meet the building’s heating load.

Easier access to mechanical room: With many retrofits it is not possible to get a large boiler into an existing boiler room because of the limitations of the existing building. Doorways are often not large enough to get a large new boiler through. For penthouse mechanical rooms, a new boiler may have to be moved in via the elevators. Both of these building limitations mean that smaller modular boiler plants are necessary. Smaller packaged condensing boilers can be used in commercial buildings instead of bringing in cast iron sections and constructing the boiler in place.

Space reduction: Condensing boilers are smaller in size because of their compact heat exchangers and smaller water volumes. This means floor space can often be freed up in the mechanical room, especially when wall mounted boilers are used.

With many building owners and engineers now recognizing the benefits multiple condensing boiler plants provide, several trends have emerged in this market. One of the most encouraging is the cost of condensing boilers is no longer a great impediment to their use.

In the early 2000s condensing boilers were often double the cost of non-condensing boilers. Now the cost differential has lessened significantly so there is often only an incremental difference in cost. This has increased the popularity and market share significantly for condensing products. One manufacturer reported “condensing is what everyone wants now, even if it is not a low temperature condensing application.” 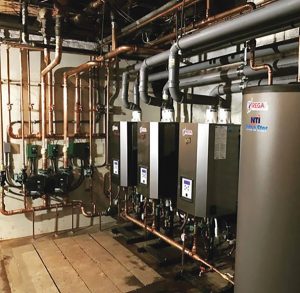 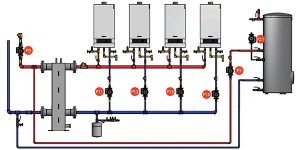 Multiple boiler condensing plants tend to have between two and four boilers. The size of the Btuh load typically determines the number of boilers used and also often determines whether wall mount or floor mount boilers are used.

In a retrofit application a single large boiler will usually be replaced with two boilers. Each boiler with be sized with a capacity of 66 per cent of the load so that it can provide sufficient capacity to meet most of the load if one boiler is out of service. For existing plants with two boilers, it is common to replace these with three boilers.

Some contractors do not fully realize the value of their time, so many systems are still built on-site. I was told by one manufacturer that they use these prefabricated systems on about 50 per cent of their projects. Another said that they find these systems are used primarily where skilled installation labour is scarce, such as in more remote northern locations.

As more contractors discover the benefits of time saving and mistake free installations, I believe prefabricated systems will be used more often. 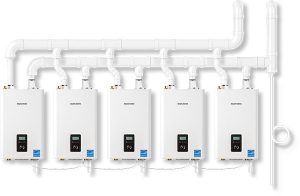 Another growing trend with both new and retrofitted multiple condensing boiler plants is the use of common venting systems. In new installations, the architect often wants as few holes in the building as possible. In retrofits the existing old chimney is often used as a chase for the new venting.

A common venting system allows for only one vent pipe in either of these situations. Boiler manufacturers typically do not supply the venting material, but they do have specific venting requirements that must be adhered to. The vent supplier will provide the venting system design.

Common venting is not the preferred choice for all, as one manufacturer indicated that “each boiler would be happier to be individually vented.” This is due to the high turndown ratio of multiple condensing boiler plants that can pose challenges with one big common vent. But with the demands of the architects and the challenges of finding a vent location for retrofits, it is safe to say that common venting will only get more popular for multiple condensing boiler plants.

With more and more of these systems being installed I am confident that over time venting manufacturers will overcome the challenges and issues.

There have been tremendous changes in the way that multiple condensing boiler plants are being controlled. In the early days of these plants, controls were complicated and often required a separate controls contractor to be hired. Building Management System (BMS) suppliers ruled the day, and they told everyone they could control everything including the boilers. The BMS companies just wanted a dumb boiler control and they would do the rest.

Since it is not easy to effectively control multiple boilers with modulation burners these early systems did not always run as smoothly as planned. Boilers often ended up being turned on and off like light switches, which destroyed boiler plant efficiency and created maintenance problems.

Today this situation has largely changed, with boiler manufacturers now providing their own integrated boiler controls that are simple and easy to interface. Boiler manufactures now typically provide the local boiler plant control with their onboard controls, and will manage the modulation of the burners and the staging and rotating of the boilers.

The boiler plant will now just provide an interface with the BMS through BACnet, Modbus or similar communication protocol. This provides the best of both worlds as it allows the boiler plant to be run as efficiently as possible, yet still gives the BMS the information and influence they need. The BMS can get information such as boiler and pump status, and it can manage how much heat is delivered by telling the boiler plant what temperature is required on the main supply to the building.

While there has been tremendous progress made with multiple condensing boiler plants in the last 20 years, there are still areas where common problems and issues arise. Venting concerns are still common, as every project has its own unique requirements.

Sidewall venting is often the first choice on projects, but it is not always the best option. With the low flue gas temperatures of condensing boilers the plume of flue gas coming from a large condensing boiler plant can create havoc on the side of buildings. Losing the view out of a window to plume of flue gas is not very popular with building occupants. Ice buildup can be a concern in many cold climate areas of Canada.

With common vent systems becoming more popular, getting all the correct pieces from the vent manufacture can sometimes be challenging. As one boiler manufacturer stated, “Venting is often the part of the job that falls into no-man’s land. It’s sometimes an afterthought.”

Multiple condensing boiler plants will often see inconsistent gas supply from the on-site meter and regulator to the boiler. This causes burner problems because the gas supply does not respond properly to the changing and often very low gas demand of the modulating burners. This problem is often difficult to diagnose, as the finger of blame gets pointed first at the boiler.

Multiple condensing boiler plants provide efficient, reliable and integrated heating systems in many buildings across Canada. While they are not perfectly suited for every building, they will continue to dominate the commercial boiler market by providing the reduced energy consumption demanded for the green buildings of today and the future. <>

Robert Waters is president of Solar Water Services Inc., which provides training, education and support services to the hydronic industry. He has over 30 years experience in hydronic and solar water heating. He can be reached at solwatservices@gmail.com.