Using the right tools will ease the clearing of blocked drains, and you never know what you'll find.

We humans are a fickle and funny bunch at the best of times. We often take for granted some of the simplest and most amazing things in life, and we get preoccupied or obsessed with irrelevant and meaningless nonsense.

The internet makes overnight celebrities of anyone who can prank, punk or tweet any and all varieties of inane foolishness. If you can surprise, shock or humiliate people, all while catching it on camera, you might just be the next Youtube millionaire. Meanwhile, the nurses, tradespeople and everyday working class heroes that keep the lights on, the food growing and the water flowing, toil away in relative anonymity.

It is a part of human nature, and I am just as guilty as the next person. Too often we don’t notice how good we have things until something goes wrong. Most people don’t notice or pay attention to their hot water tank until it stops working, and not being able to start the day with a hot shower can make for some unhappy customers. Few things however can ruin your day faster than a blocked drain, be it the kitchen sink, the bathtub or the main sewer line.

Yes drainage systems definitely fit the bill of things we take for granted. As long as they are working properly nobody thinks of them at all, and as soon as they stop doing their job they demand immediate and undivided attention.

I’ve cleared my fair share of clogged drains over the years. If I have learned anything, it is always be prepared to be surprised. The moment you think you have seen everything, someone will try to flush something down the toilet you never could have imagined. My closet auger still has a kink in it from when I once pulled an entire pair of blue jeans out of a toilet.

Steve Goldie once found a pair of blue jeans trapped in a toilet on a service call! We want to know- what’s your most unbelievable #DrainDiscovery? Tweet us your story using the hashtag #DrainDiscovery and your story could be featured in our next issue!https://t.co/mW7lWQJEK7 pic.twitter.com/t0ykeO7JE9

I would estimate that 75 per cent of clogged drains are caused not by misplaced pants but by the same recurring cast of culprits: hair in the bath/shower and bathroom basins; fat, grease and coffee grinds in kitchen sinks; and overly abundant paper products in toilets.

The vast majority of these blockages are cleared in a matter of minutes if you employ the right tools and strategies. Drain clearing equipment comes in a multitude of sizes and styles specific to differing sizes of drain. 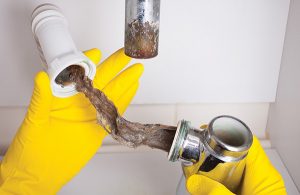 The most common obstructions are hair in the bath/shower and bathroom basins; fat, grease and coffee grinds in kitchen sinks; and overly abundant paper products in toilets.

Closet and urinal augers are designed to go through and clear integral traps of toilets and urinals. Small handheld snakes, either manual or power operated, are ideal for clearing lavatory and kitchen sink drains. They typically have around 25 feet of cable between 1/4-in. and 3/8-in. diameter.

Smaller snake cables typically have a fixed bulb style end. I prefer the slightly larger cable with replaceable heads which allow an assortment of styles depending on the nature of the blockage. This also allows for the use of a “drop head” end which assists in ensuring the snake goes down the drain rather than turning upwards into the vent which can be a very frustrating problem when it occurs.

Whenever I got called to clear a drain, I knew that if I wasn’t in and out in minutes, I’d have to be prepared to be there for the long-haul. That’s how it always seemed to go.

If a toilet doesn’t clear on the first or second attempt with the auger, it probably meant I was going to have to remove the toilet and put the auger through it in reverse. This would inevitably displace some foreign object, a toy car, a bottle of nail polish, a pen or maybe even grandpa’s lost dentures.

I’m sure I have cleared hundreds of toilets over the years, and the only time I could not get one clear was in my own home. I removed the fixture and took it to the yard, augered it in both directions but to no avail. After hours of frustration, sweat and swearing, I finally conceded defeat and decided to install a new toilet. I had to know what was in the old one though so I broke it open to find a ceramic gift my daughter had made for me in kindergarten. It was a bit larger than a golf ball and with a conical shape, a perfect size and shape to get tightly wedged into the toilet’s trapway. 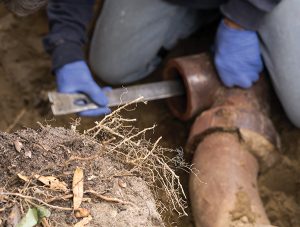 I’m sure that is exactly what my two-year-old son was thinking when he dropped it into the toilet. I have no proof, but he has received the blame all these years.

Most manufacturing company literature claims that even the 1/2-in. and 5/8-in. cables are good for four-inch drains, I however would never use anything smaller than a 3/4-in. cable, and even at that if I encountered the slightest resistance I would go with the 1.25-in. cables and the rodding machine.

The smaller cables can easily twist up inside a four-inch drain and that is no fun and can be difficult to extract once it occurs. Better to avoid this altogether by using the bigger tool.

The rodding machines are heavier and use 10-foot long chain reinforced cables that are fed in one at a time. It is not as convenient as the much longer self-feeding cables of the drum style rooter machines, but in my experience, when you are working on four-inch drains it is usually the way to go. This is particularly true if you are dealing with roots, which is often the case in main drain blockages.

In a perfect world, the sun would always shine and showers would always run hot, children would keep their toy cars and kindergarten projects out of the toilet, and grandpas would keep their false teeth in the mouths. Until that perfect blissful world arrives however, the opportunity to make a good living clearing drains will always be with us.

Your local wholesaler will be happy to ensure you have the right tools for the job, at least until your Internet celebrity career takes off.

Steve Goldie learned his trade from his father while working as a plumber in the family business. After 21 years in the field, he joined the wholesale side of the business in 2002. His expertise is frequently called on to troubleshoot systems and to advise contractors. He can be reached at sgoldie@nextsupply.ca