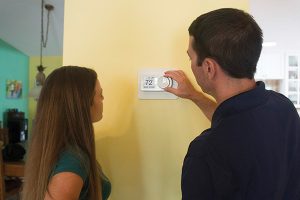 On-demand IAQ systems can operate with a variety of Wi-Fi thermostat brands.

Aaron Engel is vice president of business development at Fresh-Aire UV (www.freshaireuv.com), a North American manufacturer of residential, commercial and medical UV disinfection and carbon/titanium/PCO-based systems, as well as on-demand IAQ packages. Engel can be reached at aaron@freshaireuv.com.