Online reviews are the new word of mouth for contractors 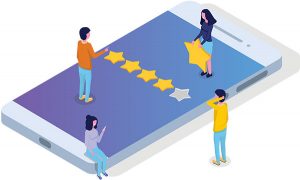 For mechanical contractors building their digital presence, online reviews are unavoidable.
The potential customers searching for HVAC and plumbing contractors can be quickly enticed – or thwarted – by star rankings on websites such as Google, Yelp and Facebook.
Positive or negative, online reviews can seriously impact a company’s reputation.
Matt Plouffe, account manager at Toronto-based digital marketing agency Hooplah Inc., says most consumers will read reviews before calling or visiting a company’s website.
“Reviews are becoming more valuable than even word of mouth, because it’s sort of the online word-of-mouth, when you’re seeing individuals talking about businesses and their experience with these businesses and their company,” he says.
THE RESPONSE
The visibility and permanency of negative reviews can be overwhelming. For Leslie Hartsman, the agency’s president, the key is responding effectively.
When faced with an unfavourable review, Hartsman recommends responding to the disgruntled customer and asking them to reach out to the company directly.
After resolving the issue directly, he suggests going a step further by replying to the original comment, thanking the customer.
“99 per cent of the time, the person who was irate or had a problem will respond and say, ‘Thank you for providing that information,’” Hartsman says. “It’s usually about three to four pieces of communication within that negative stream. If it’s left unheard and unanswered, it looks much worse than responding.”
Though, businesses should avoid leaving canned responses. For customers who leave detailed reviews, Plouffe says the company should put in the same effort.
“When you have people writing paragraphs or essays about their experience, actually take the time to think about your response and put the same effort into the response as they did their initial complaint or review,” he says. “These are all transparent, everyone can see these online. So, you are also presenting yourself as a business when you are responding to these reviews.”
For reviews that are false or particularly “nasty,” Plouffe says it’s possible to remove them – but it can be a tricky process.
“There’s different types of people who are going to be posting negative reviews,” Plouffe said. “Some of them will be like, ‘This place sucks.’ Short and sweet – those are the kinds of people that you’re not going to be able to sway.”
COMMUNITY MANAGEMENT
Responding to negative reviews is just one part of the equation.
Encouraging happy customers to leave positive reviews online can bolster online ratings. Even more, negative comments can be outweighed by positive reviews to build back trust.
“The key is not to concentrate on the negative,” Hartsman says. “A lot of companies only respond when it’s negative. You should respond for everything. If there’s a positive review out there, you should say, ‘Thank you very much. Looking forward to seeing you again.’”
With so many platforms available for customers to voice their concerns, it can be difficult for businesses to know where to focus their efforts.
“When it comes to your online presence, Google is going to be one of the more valuable review sites,” Plouffe says. “Reviews on [Google My Business] do help with rankings and presence online. If your Yelp review is a three and your Google review is a four, people will compare the two. But with Google, specifically, it’s also going to help with your [search engine optimization] elements within Google search.”
Though, managing reviews on social media platforms such as Facebook, Twitter and Instagram will also give contractors an edge.
“At the end of the day, it’s an extension of your social media, it’s like community management,” Hartsman says. “If you’re a business that makes a billion dollars a year or you’re a business that makes $250,000 a year, unfortunately, these days, everyone has to go through the same steps.” <>