When it comes to designing systems with heat exchangers, stick with counterflow piping.

Heat exchangers, in all their varied types and sizes, allow heat to move from one fluid to another without any contact between those fluids. They add considerable versatility to hydronic system design. Common applications include domestic water heating, snow melting and hydronic subsystems for garage floor heating.

This type of heat exchanger is made by assembling a stack of pre-formed stainless steel plates that have copper bonded to them around their perimeter, and at points of contact between adjacent plates. The concept is shown in Figure 1. 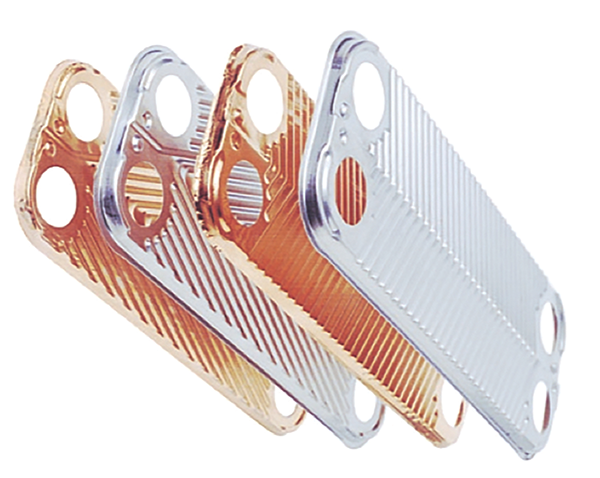 The stack is then compressed and heated in an oven to approximately 2,000F to braze the surfaces and perimeters together.

Most manufacturers of brazed plate heat exchangers have standardized plates sizes. Typical plate dimensions are 3 x 8 in., 5 x 12 in., and 10 x 20 in. For a given plate size, heat exchange ratings are increased by adding plates to the “stack” that become the overall heat exchanger. 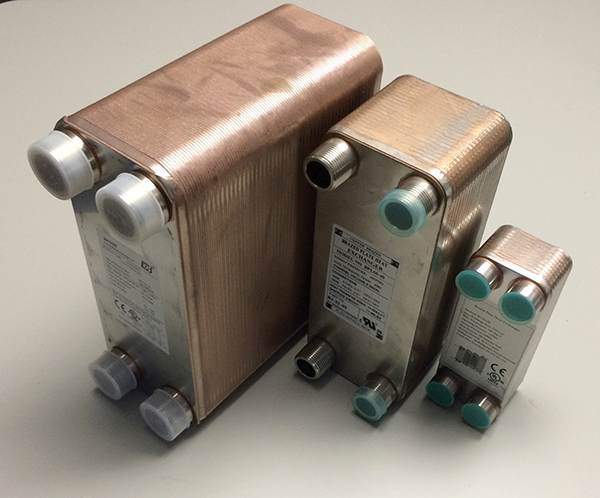 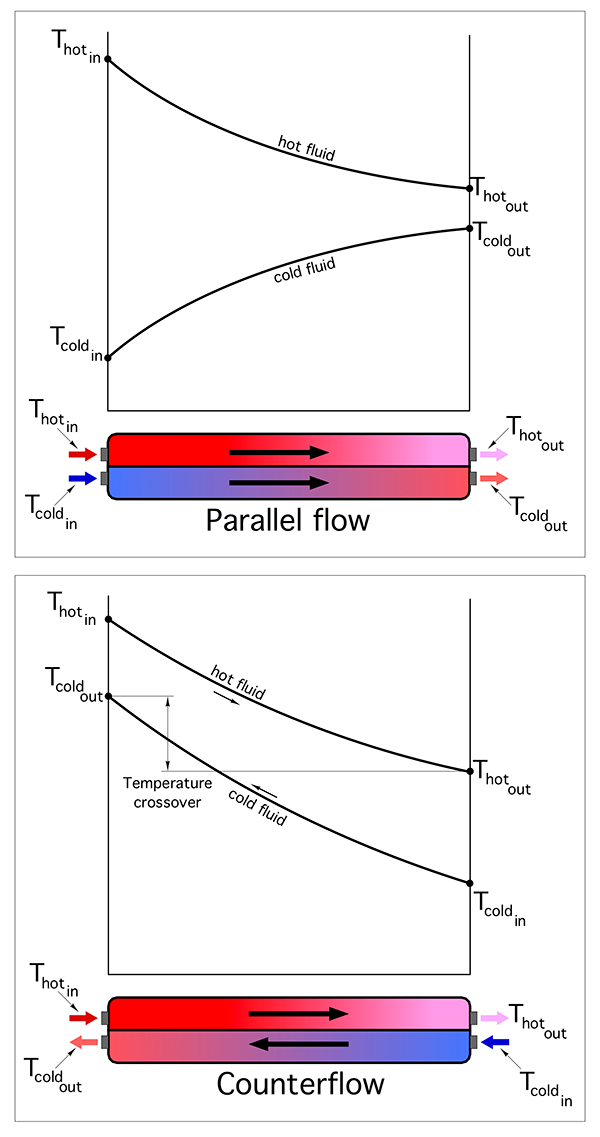 Figure 3. There are two ways to pipe up a flat plate heat exchanger: parallel flow or counterflow. 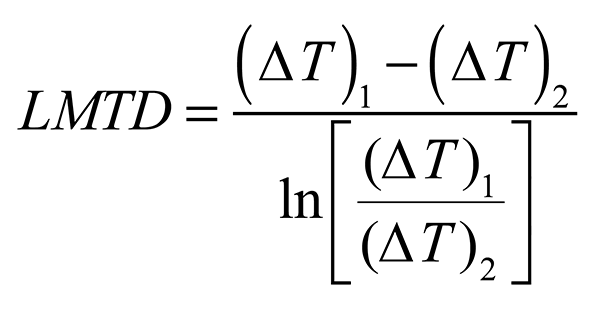 ln [ ] = the natural logarithm of the quantity in the square brackets.

Here’s an example of how to use Formula 1: Calculate the LMTD of the heat exchanger shown in Figure 4. 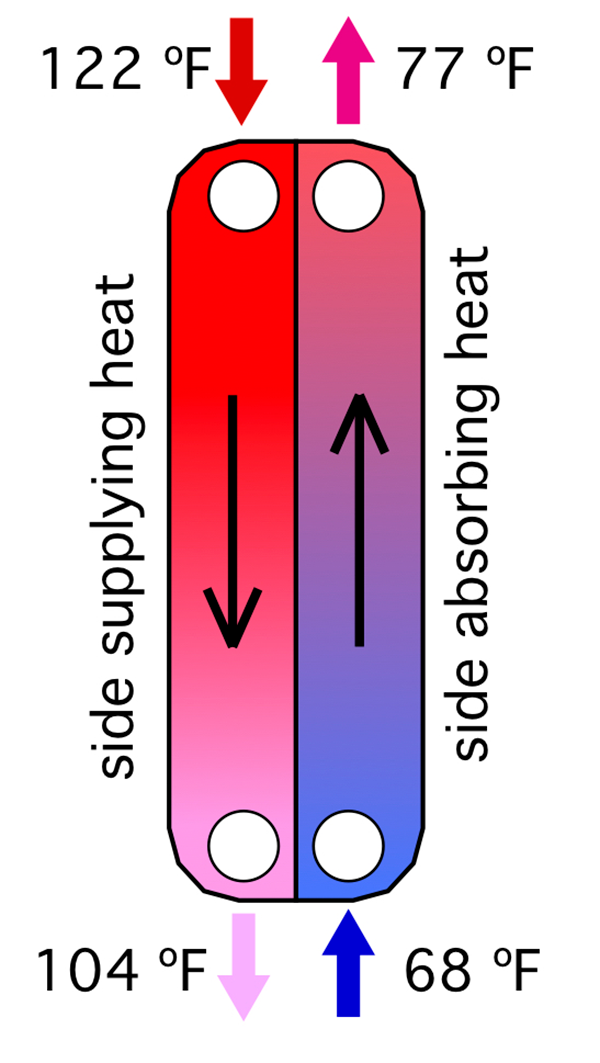 The higher LMTD at which any heat exchanger operates, the greater the rate of heat transfer, all other conditions being equal.

Heat transfer theory can also be used to prove a very important concept in the application of heat exchangers:

This implies that heat exchangers should always be configured for counterflow when the goal is to maximize the rate of heat transfer.

Figure 5 shows a piping schematic where the heat exchanger is configured for counterflow. 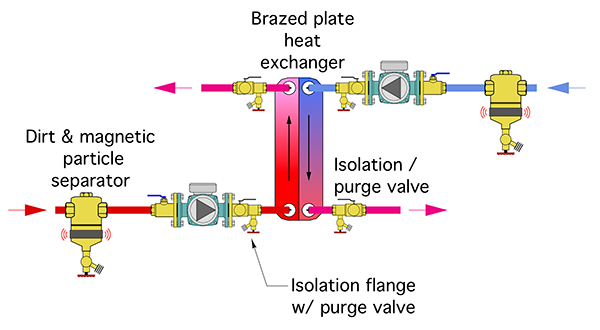 Always check your piping schematics, or schematics that you may be approving for others to use, to be sure that all heat exchangers are piped for counterflow.

Check any installations that you are inspecting, that include heat exchangers, to be sure that they are operating in counterflow.

Let software do the hard work

Although it’s possible to manually estimate heat exchanger performance, the calculations are complex and time consuming. Modern practitioners use one of several available heat exchanger software tools available from manufacturers to rapidly evaluate “what if” scenarios, which lead to a final model selection.

In most cases a brazed plate heat exchanger will be sized to pass a given rate of heat transfer when the difference between the entering hot fluid temperature and the leaving cooling fluid temperature is no more than 5F.

Here are a few final application points regarding heat exchangers:

“Cleanliness is next to godliness” when it comes to heat exchanger performance. It’s always a good idea to put a high efficiency dirt separator, preferably one with a magnet, up stream of both inlet ports of any heat exchanger. You can see these in Figure 5, along with isolation and purging valves. The latter can be used, if ever necessary, the isolate each side of the heat exchanger and chemically clean scaling from internal surfaces.

Always support heat exchangers to reduce stress on the connecting piping. Several types of brackets are available and they range from a simple steel “shelf” bracket, to brackets that bolt directly to the threaded studs supplied on some heat exchangers.

Finally, if the heat exchanger will be operating with chilled fluids, which are lower than the interior dewpoint temperature, be sure it’s fully wrapped with elastomeric foam insulation or other vapour impermeable insulation material.

Stick with counterflow piping and the details mentioned above, and then stand back and be amazed at the incredible performance of modern brazed plate heat exchangers. <>