Optimal Tubing Depth in a Slab 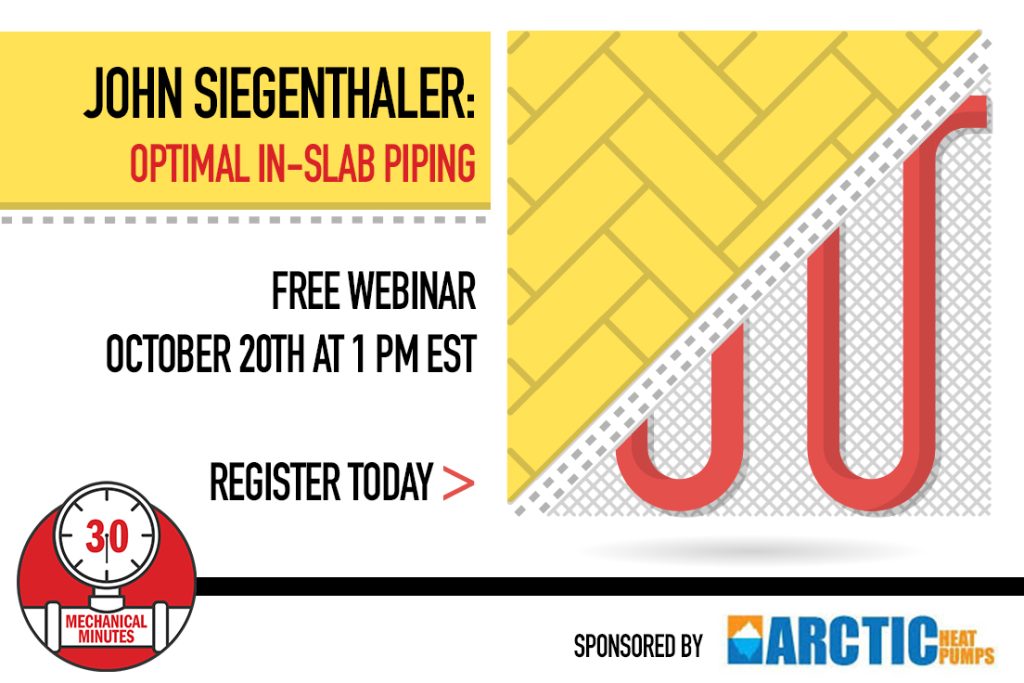 HPAC Magazine hosted another edition of  is 30 Mechanical Minutes free webinar series on Wednesday, October 20th, and this conversation focused on the importance of piping depth in the hydronic heating of concrete slabs.

Installing a hydronic heating system in a concrete slab requires planning, precision, and a lot of knowledge-based skill. Siegenthaler explained that much of the thermal performance of the final concrete is determined by how deep the tubing is laid in the slab. “The more concrete that you have over the top of the tubing, the more resistance there is,” he says.

His research shows the optimal position for the pipe is in the centre of the slab, but Siegenthaler has witnessed instances when the tubing ended up at the bottom of a four-inch or even a six-inch slab. 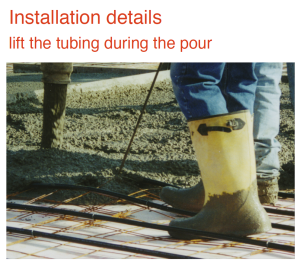 “Don’t let somebody tell you it doesn’t make a difference where the tube is in the slab. It does make a difference, and it’s especially relevant today as we move towards heat pumps and high-performance condensing boilers as the hydronic heat sources.”

He suggests the best way to ensure that tubes attached to a welded wire fabric end up in the middle of the slab is to have one of the masons dedicated to lifting the wire mesh and tubing at the leading edge during the pour. Noting the obvious, he insists that it’s important to get things right the first time, because once the concrete is laid there is no turning back. 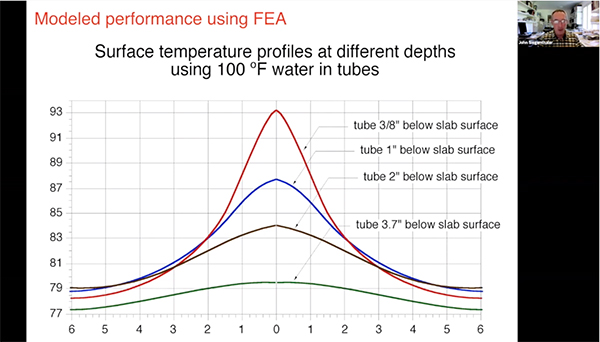 Siegenthaler arrived at his conclusions regarding optimal depth for tubing following the results of computer simulations of different scenarios using Finite Element Analysis (FEA). The FEA models the thermal performance of the concrete slabs using equations and ultimately gives a picture of what’s going on thermally inside the slabs with the tubing at various locations.

He showed simulations using a four-inch slab with a 3/8-in. hardwood floor finish on top. Other constants in the modelling were 100F water temperature, 70F room temperature and one-inch polystyrene insulation under the slab. He notes that different floor finishes would give different thermal results depending on their lateral heat dispersion qualities.

The mathematical results generated by the FEA program illustrated isotherms radiating from the pipe in contour lines which transferred heat in a lateral direction over the floor above. Siegenthaler concluded the deeper into the slab the tube is located, the better the lateral heat dispersion. However, if the tube was placed at the bottom the result is a good lateral heat dispersion but a much lower surface temperature on the floor.

Using an example of a typical 1980’s house with a design load which required the floor to deliver about 30 Btu/h per square foot, Siegenthaler said it would require approximately 120F water if the tube was in the centre of the slab. Moving the tube to the bottom would mean increasing the water temperature to 134F.

In the past, that 14F difference could have been accomplished by turning up the mixing controllers, and it would not have had much effect on the overall efficiency. However, it’s not the case today where such an increase in water temperature would have a significant effect on efficiency.

Compare that to a modern efficient house with a design load of 15 Btu/h per square foot. With the tube located in the middle of the slab the optimum water temperature would be 95F compared to 102F if the tube was at the bottom of the slab.

Even this seemingly small 7F increase would still impose a penalty on the coefficient of performance curves on heat pumps.

“You’ll see that definitely does impose a penalty, and remember that’s a lifelong penalty,” said Siegenthaler. 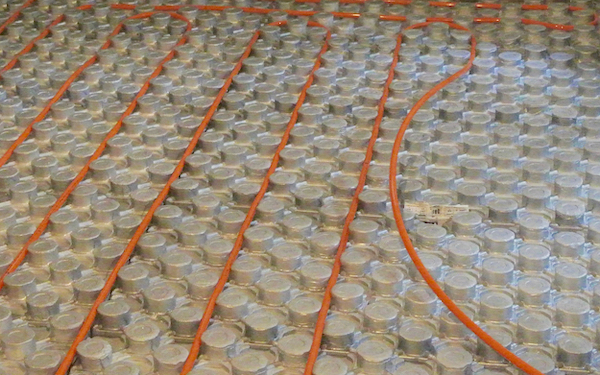 Knobby foam panels are a product that have been around in the European market since the 1980s and are widely used where they put the panels over an existing structural slab and pour a thin layer of screed concrete over the top. The product allows the thin layer to cure and micro-fissures will occur and relieve the tensile stress without causing arbitrary cracking in the finish and avoid having to perform saw cuts. The panels ensure the tubing will stay in place, but Siegenthaler would like more data from manufacturers on the relationship between the water temperature versus heat output based on varying thicknesses of slabs poured over the product. Because the tubing is in contact with the foam and not entirely encased in concrete alone, as a designer he questions how that effects the overall thermal performance.

Siegenthaler wrapped up the segment with this advice: “If you’re designing hydronic systems today and you’re building around modern heat sources and low water temperatures, I would highly encourage you to get that tubing up off the bottom of the slab … It’s going to enhance the performance of that heat source for the entire life of the system … It’s not something that should be trivialized. It’s not something that should be ignored.” <>

View the entire webinar below.

[click on this link to view past editions of 30 Mechanical Minutes.]