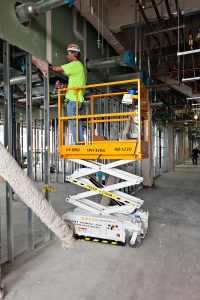 Using an oversized lift on indoor worksites is sometimes like attacking a mosquito with a baseball bat. It is impractical, unsafe and might do more damage than good. Low-level scissor lifts are great tools for indoor projects, such as installing ductwork or plumbing. They are easy to manoeuvre, have intuitive controls, and most importantly, get you to the right working heights without lugging tools and building materials up shaky ladders and scaffolds.

There are hundreds of lifts on the market and picking the right one optimizes productivity and operator safety on the jobsite, as well as adds a low-maintenance machine to any tool fleet. When faced with multiple catalogs of varying models and specs, customers should consider four features before making a purchase: working height, platform size, worksite impact and lifting capacity.

Those smaller scissor lifts bring added benefits to many jobsites. Low-level scissor lifts have step-in heights as low as 50 centimeters, making it easy for operators to load tools and materials onto the platform. Low step-in heights eliminate the fatigue caused by climbing multiple ladder rungs; reduce the chance of a serious fall; and minimize repetitive strains that can ultimately lead to workers’ compensation claims. Some manufacturers also incorporate a full swing gate, which makes platform loading easier and safer because the operator does not have to duck under chains or railings.

Using an oversized scissor lift for interior work, such as ductwork installation, can even endanger the operator. Crush hazards are a constant presence when operators use an oversized lift indoors because the platform height exceeds the ceiling height. For instance, if an installer is using a six-meter lift inside a six-meter-tall room, he or she might get distracted while looking down over the railing as the platform is nearing the ceiling, creating a potential crush hazard. A low-level lift, on the other hand, has roughly a 4.5-meter-tall platform height, which allows the installer to achieve a six-meter reach with virtually no crushing hazard.

Stowed height is also important for operators to consider when selecting a low-level lift. If a lift is less than two meters tall with the platform fully-lowered, operators can easily push or drive the lift under overhead fixtures, such as support beams and doorframes.

THE SHORT AND LONG OF LOW-LEVEL LIFTS

Having a lift that offers plenty of working space, yet still fits through cramped worksites, is just as important as reaching the correct working height. A low-level lift should be less than one meter wide and two meters long so operators can easily transport it or manoeuvre it through narrow pathways. For example, some drive-around, low-level lifts are as narrow as 75 centimeters, which is wide enough for an operator and any tools he or she might need, yet still small enough to fit through doorways and take up minimal space in narrow hallways. And a lift that is less than two meters long will fit inside most elevators.

Some lifts have platform extensions that give operators extra working space for an additional person or building materials. The extension also allows operators to work over obstacles that might prevent the lift from moving forward. For example, an operator can slide out the extension to install a lighting fixture over a stairway railing.

Low-level lifts should have minimal or no impact on the worksite. For instance, dual front wheels, counter-rotating wheels and self-contained hydraulic systems prevent the chance of hydraulic oil leaking and damaging costly carpeted, hardwood or tiled floors.

Low-level scissor lifts have some of the best weight distributions in the industry. Their wheels spread the lift’s weight throughout the unit to reduce pressure on sensitive surfaces, including tile and stone floors. For example, a 544 kilogram lift with dual front wheels might have wheel loads as low as 632.3 kPa, which enables operators to manoeuvre the lift over tile, laminate, raised floors and mezzanines with minimal risk of damage. The weight distribution also means operators can get onto poured concrete several days sooner than with heavier lifts.

Hydraulically driven lifts have the highest potential for hydraulic oil leaks since they use the fluid to drive, raise and lower as well as steer the lift. Hydraulically driven lifts also have multiple connection points between the hydraulic pump and systems, which increases the risk of a leak occurring. If a leak occurs, the oil can stain floors and create slippery surfaces. And hydraulic units require considerable maintenance. For instance, they consume hydraulic oil faster and require more frequent filter changes than electric-driven units.

LOCKED IN AND CHARGED UP

When faced with a project that requires working through long hallways and working hours, consider lifts that feature castor locks and efficient, built-in charging systems. Some manufacturers include caster locks that limit the wheels’ turning radius. These locks, when engaged, make low-level lifts ideal for working through long hallways because they allow operators to drive easily in a straight path while permitting minor steering adjustments.

Customers also should consider features that protect the environment if they are purchasing low-level lifts. For example, some manufacturers build lifts that have electrical drive motors and steering systems. These systems draw fewer amps and require less overall power than hydraulically driven engines, which results in long operational hours, sometimes as long as 16 hours, and fewer recharges. Some manufacturers also include an on-board battery charger that self-monitors the electrical current and stops it once the battery is fully charged. This reduces energy consumption and prevents the battery from overcharging, which can shorten its life. Some chargers also maintain batteries independently from each other instead of pushing the electrical current from one battery to the next. Combined with a self-monitoring system, they help ensure the equipment owner gets the most life from their battery.

IT LIFTS ME; IT LIFTS A LOT

Having a low-level scissor lift that can elevate workers and building materials while maintaining its stability is key to maximizing productivity.

Low-level lifts excel with their large lifting capacity. For example, some three-meter lifts have 340-kilogram lifting capacities, which is generally enough to support two operators or a single operator and any building materials he or she may need on the jobsite. To minimize a scissor lift swaying under heavy loads, some manufacturers enhance platform stability by using a robust scissor stack and oversized pins.

Knowing what features fit your business or project needs puts you ahead of the curve when it comes to selecting a low-level lift. Each feature should increase your productivity and minimize costly downtime on a wide range of applications. From hanging ductwork to installing the thermostat, the best low-level lift safeguards the operator, the project, and the production schedule from beginning to end.

Justin Kissinger is the marketing manager for Custom Equipment, Inc., which manufactures Hy-Brid Lifts. He can be reached at justin@customequipmentlifts.com.