In this edition of 30 Mechanical Minutes panelists review why maintaining proper water chemistry is essential with modern boiler systems. 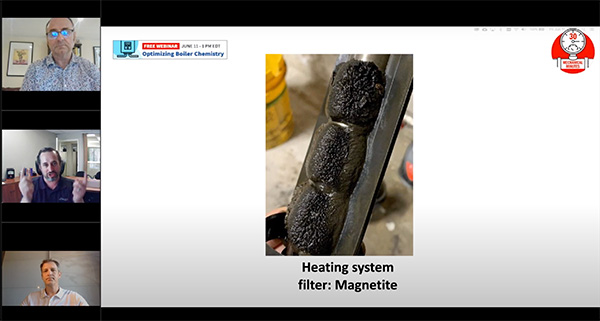 In a recent installment of HPAC Magazine’s 30 Mechanical Minutes, the free webinar series featuring virtual content for real world professionals, HPAC editor Doug Picklyk sat down with HPAC contributing writer Steve Goldie and Brian Morgan of The Morgan Group to discuss the merits of being proactive in dealing with water chemistry in the design, operation, and maintenance of hydronic systems.

Goldie and Morgan shared their knowledge of treatment solutions and what’s important to consider in new and retrofit applications —both residential and commercial.

Although water is the optimal heat transfer medium, optimizing the water chemistry is vital in the new generation of modern boilers. Goldie, a hydronics specialist with Next Supply with more than 40-years-experience in the plumbing industry, recalled the main cause of corrosion and subsequent reduced reliability in old cast-iron boilers was oxidization due to air in the system.

The main culprit today is the quality of the water being pushed through the much narrower passageways. New technologies create hot water very quickly, and there are a lot of opportunities for scale build-up especially around the heat exchangers. This build-up can cause the heat exchanger to overheat and fail which is a huge contrast to old cast iron systems which could be full of sediment for decades and still be functionally operational. 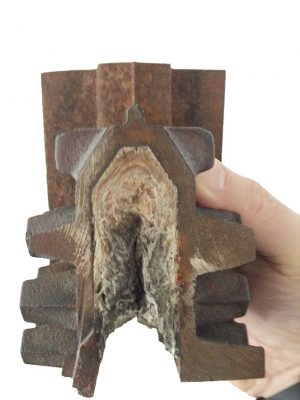 Example of scale build-up on a cast iron heat exchanger.

“Water chemistry is crucial these days,” said Goldie, “In my day, the most important component was the air separator. Now it’s not the case.” He went on to stress the importance of testing the pH of the water—even from the municipal supply—and to install a de-mineralizing cartridge which triggers an alarm to alert the owner when it needs to be replaced.

“Water quality and chemistry is something you can’t ignore anymore,” said Goldie. “It needs to be part of the regular maintenance schedule and routine of your boiler system.”

Boiler manufactures have now identified water chemistry as a catalyst for premature boiler system failures and have even made a point of nullifying their warranty if the boiler’s water supply is not maintained to their specifications.

Morgan illustrated the new best practices and recommendations issued by manufacturers which included procedures such as:

When installing a new boiler into a large building with existing steel and copper piping, sometimes it’s difficult to flush an entire system, Morgan recommends at the least testing the water and treating the system water before introducing new boilers, or look at de-coupling the new boiler system from the existing system with a heat exchanger, so you can ensure you have great water quality flowing through the boilers.

He’s also seeing installations where the hydronic system is decoupled from the make-up water feed system with a make-up package to easily treat and test the water in the boiler system.

“I’ve seen closed-loop heating boilers installed in buildings where they’ve had leaks, and in a very short order of time the systems will fail because of scale build-up on the boiler,” agreed Goldie, who also pointed out the importance of the volume of water in a system even if the municipal water has been tested before entering the system. 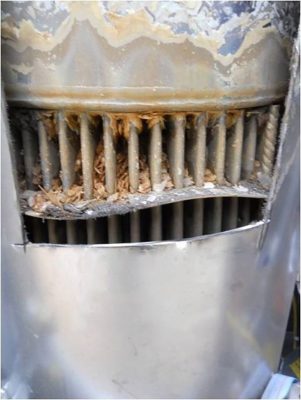 “The problem is there might be so much volume in that building that there’s still enough mineral content in that volume of water…even though the water is within the acceptable limits,” said Goldie. “The total volume brings so much calcium into these heat exchangers that you’re still going to have a problem. I’m a big fan of isolating your boiler system from your building, so putting a heat exchanger in between your boiler and your system enables you to have much better control over the boiler water.”

This installation method is especially beneficial for instance when a service contractor may need to drain the riser. Without isolation the contractor is most likely to be refilling the system with untreated municipal water.

Another crucial piece of equipment, in our experts’ opinions, is a magnetic filtration system. Magnetic filtration systems trap magnetite which is a build-up of metal particulates which attach to components in the heat exchangers and pumps. More and more manufacturers are recommending the installation of magnetic filters on inlets before the water goes into the heat exchanger or pump as a way of treating the magnetite problem.

“Magnetic filtration cannot be ignored anymore,” said Morgan who stressed it must be properly managed by the installer, and building owners need to be educated on the downfalls of non-compliance with the manufacturers’ recommendations.

“When someone spends $150,000 or more on a new commercial boiler system, and after one heating season it’s not covered under warranty and it’s failing … that’s a much bigger issue than what the investment would have been up front,” said Morgan.

The webinar ended after a brief question and answer session with the conclusion that optimizing boiler chemistry is not an option anymore, and it can save a lot of money if you maintain these systems according to the manufacturers’ recommendations no matter where your water comes from.