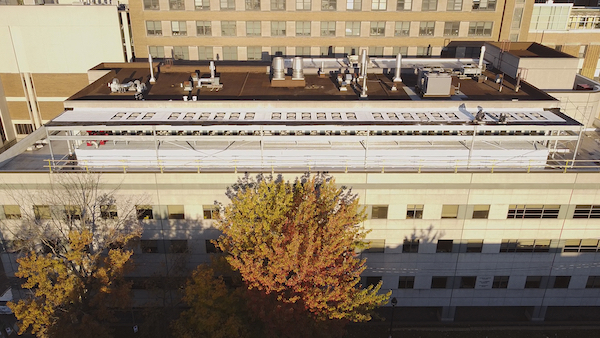 At the Jewish General Hospital in Montreal, 26 air-to-water heat pumps were installed on a custom platform on one of the buildings. (photo: Patrice Beriault)

In August, 2019, the CIUSSS began working with Énergère, a Quebec-based energy efficiency consultancy and contractor, on a massive energy-savings project involving nine buildings which included changes to boiler rooms and entire mechanical systems to reduce the network’s environmental footprint and increase operational efficiency.

Over the past two-and-a-half years, more than 40 measures were implemented in the nine facilities, including the Jewish General Hospital (JGH), a 637 bed acute-care and teaching hospital that serves as the hub of the CIUSSS West-Central network. 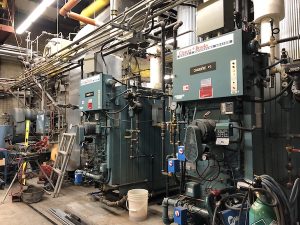 “At some of these facilities we’re removing big boilers that are running at 20% efficiency and replacing them with modern boilers running at 85% or more, and by combining all of these modifications into one project we can recover a lot of energy savings in total,” explains Georges Bendavid, Director of Technical Services for CIUSSS West-Central.

The CIUSSS invested close to $18.8 million for this initiative, of which $6.7 million came from a combination of grants offered through the Government of Quebec and utilities including Hydro-Québec and Énergir.

“The strategies that were put into place will allow us to save close to $1.4 million a year in energy costs,” says Bendavid. And based on having to finance about $10 million of the project, the CUISSS is projecting roughly a seven-year payback.

While the project did include lighting upgrades throughout the nine buildings, the heavy lifting for this initiative involved mechanical system upgrades in buildings dating as far back as the 1920s. 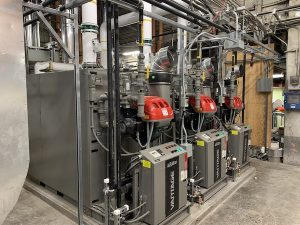 The steam boilers at Maimonides were replaced with these condensing hot water boilers. (photo: Emilia Fernandes)

All but one of the nine facilities are heated with hydronics (Miriam, a small 25-bed long-term care site, is heated with electric resistance). In three sites steam boilers were replaced with efficient hot water systems and/or heat pumps for space heating (a steam operation was retained at the JGH for sterilization, humidification and the kitchens).

Where the steam was replaced, they’re running hot water through the same radiators for the perimeter heating, but now they’re able to modulate the water temperature based on outdoor conditions to better control the environment in each room, says Emilia Fernandes, P.Eng., project manager on the CIUSSS technical services team.

In addition to the perimeter heating, all of the steam coils in the air handlers were replaced with hot water. They were re-sized, are being fed with lower temperatures and also have outdoor reset.

In the JGH alone, 24 coils were swapped out from the 100% fresh air systems and systems with return and modulating fresh air. Six of those coils—those in the fresh air systems—use small glycol loops with heat exchangers.

“We optimized the amount of fresh air, and made a lot of the systems variable volume to save energy there as well,” says Fernandes. “We’re saving energy in the distribution system where before we were losing a lot of efficiency.”

The project did not move facilities away from natural gas, but the addition of heat pumps was designed to optimize the energy efficiency in three buildings. “We optimized the boiler systems we had, and at the same time we added the heat pumps to help with the generation of the hot water,” explains Fernandes. 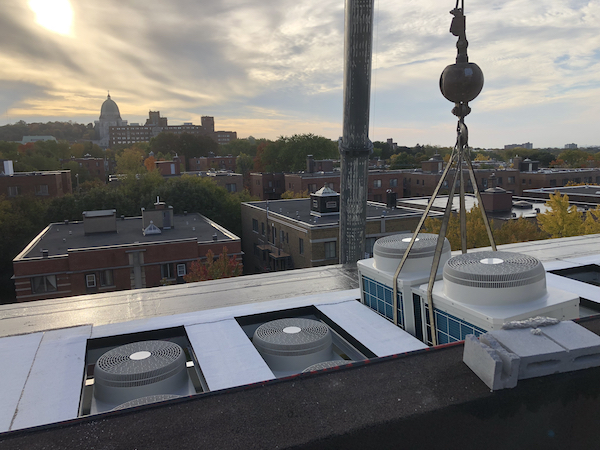 Installation of one of the 26  air-to-water heat pumps installed in a specialized platform at the Jewish General Hospital. (photo: Emilia Fernandes)

At the JGH, the 26 ATW heat pumps were installed on the roof of one building, and they were placed on a platform that serves as an outside plenum where exhaust from the building goes through the heat pump array tempering the air so the units can run with efficiency even during a Montreal winter.

Two buffer tanks (750 gallons each) were installed in the JGH as part of the loop from the ATW heat pumps to create mass for more stable temperature control and efficient hot water production.

The JGH still operates gas boilers and has water-to-steam heat exchangers, but the system was optimized with the addition of the heat pumps which bring the system up to a certain water temperature, and then the water-to-water heat pumps/chillers boost the temperature.

The whole distribution system was also re-piped to optimize efficiency and energy savings for the domestic hot water.

Cooling at the JGH is handled with existing chillers—a system optimized in a previous project. However they do have a circuit to unload the new Multistack chiller into its chilled water system.

“With this type of project, one of the things that is definitely very important is the controls,” says Bendavid. “The capacity to be able to look at what you are doing in real-time and over a period of time, and to also be able to see the energy savings.”

If a facility had an existing control system they tried to keep operations as they were, otherwise they centralized with Delta controls that allows communications to a central room in JGH where operations can be monitored remotely.

“This was done for all major heating, cooling, ventilation and domestic hot water production equipment,” notes Fernandes. “Not only were the sequences optimized, but other control points were added to better control and monitor the systems.”

In addition, a complete recommissioning was done which allowed all the facilities to discover and fix elements that were neglected over the years, and to better coordinate with the building automation systems.

As the project nears completion, the CIUSSS expects to reduce greenhouse gas emissions by 49% annually, the equivalent of removing nearly 2,128 cars from the road—with 2,200 tonnes of GHG savings from the ATW heat pumps alone.

The CIUSSS’s annual energy consumption will also be reduced by 39.3 million kilowatt hours, the energy consumed by about 1,637 households.

According to Bendavid, at the end of the day, “This type of project is not looking at just saving energy, it’s really looking at one way to finance the modernization of our aging institutions.” <>