Technology exists to move Canada closer to the European average water usage, the only obstacle is ourselves

“Water, water, every where,

And all the boards did shrink;

Water, water, every where,

Nor any drop to drink.”

It has been 40 years since I first read these words in my high school English class and for some reason unbeknownst to me they have always stuck with me, popping up in my brain sometimes for no apparent reason, or more often and predictably, every time I had to deal with a burst water line or a flooded basement. This time the verse from The Rime of The Ancient Mariner is spinning around in my brain as I address the topic of water conservation.

Water is at once one of the world’s most plentiful and most precious resources. Everyone knows water is essential to life and with approximately 70 per cent of the surface of our planet covered with the stuff it is understandable why many seem to believe its supply is inexhaustible. However, as the old mariner discovered, an abundance of water does not always mean that water is fresh and usable.

Today, 36 per cent of the global population lives in water scarce regions and a UN study predicts that by 2025 up to 75 per cent will be “water poor.” For Canadians it is sometimes tough be mindful and deliberate about water conservation considering we are particularly blessed with up to 20 per cent of the world’s fresh water supply and only make up 0.5 per cent of the global population. Water usage statistics reflect this with Canadians on average using 300 litres per day per person, second only to our U.S. neighbours to the south. In comparison, the average usage in France is just 150 litres per day per person. The truth is, fresh water is a finite resource that is becoming scarce even here in Canada. When it comes to managing this precious resource we can and we should be able to do better.

The why we should manage our water resources better is easy, first of all it is simply the right thing to do. Morally, ethically and economically it makes sense and I cannot imagine anyone who would not be motivated by at least one of these things. Being good stewards of these resources will help ensure they will continue to be available for future generations. For many of us the most effective motivator is economic so we need to understand the true cost of water usage is not simply the amount we pay each month on our water bill.

Water treatment plants that provide safe clean water, as well as wastewater treatment plants that process our sewage and drain water, are very costly to build and operate. Effective water conservation products, policies and habits can delay or even eliminate the need for developing new or expanded municipal facilities, saving all of us consumers and taxpayers millions of dollars. Conserving and reducing water use is not just ethically and morally green; it saves green, taxpayer dollars. 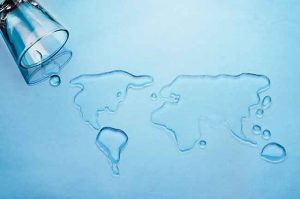 The technology exists to move us closer to the European average water usage, which is about half of our current average, the only thing that stands in the way is ourselves.

There is considerable evidence that investing in water efficiency can result in several potential economic benefits according to a study by The Alliance for Water Efficiency (AWE). The AWE is a stakeholder-based nonprofit organization dedicated to the efficient and sustainable use of water. Headquartered in Chicago, IL, the Alliance serves as a North American advocate for water efficient products and programs and provides information and assistance on water conservation efforts.

Its report quantitatively examines economic growth impacts of water/energy efficiency investments, specifically in terms of job creation, income, GDP, national output, water savings and other benefits. To produce the report a consultant team modeled a wide range of water efficiency program possibilities and confirmed that economic stimulus benefits could be broadly distributed throughout a national economy. Among the report’s findings: the economic benefits per $1 million of investment could be between $1.3 million and $1.5 million of generated GDP and between 15 and 22 jobs created. That is a pretty good return on investment which strongly supports the idea that conservation simply makes good economic sense.

If the why is easy, the how is much more complex and multi leveled. My first introduction to water conservation occurred way back in the 1970s when I visited my friend’s cottage as a kid. The cottage had a single toilet and was on a septic system. My friend’s father was very serious when he explained to me the acceptable toilet protocol, which went like this; “if it’s yellow let it mellow, if it’s brown flush it down.” It was the first time I had heard that one, sort of an early version of the dual flush toilet. If my memory serves I think the toilet was also fitted with an early water reduction device, the low tech but effective brick in the toilet tank. You scoff at the brick? By now that brick might just have saved over 49,000 litres of water if it is still in use and I’m betting it is. Seriously, I did the math and I was being very conservative.

My friend’s father was way ahead of the industry. It was not until after the Energy Policy Act (EPAct) was enacted in the early 1990s in the U.S. that we started to see low water consumption fixtures getting widespread use. I do not recall exactly when they were mandated here in Canada but I do remember that long afterwards there was still a pretty good underground market for the older water guzzlers.

Consumers were skeptical about the effectiveness of the early low flush toilets and there were plenty of anecdotal stories of failures and clogged drains. In truth I think even most of the early models did perform reasonably well. Today there really is no reason to doubt the performance; there is no shortage of high performance flushers in the current marketplace.

Fixture engineers use advanced hydraulic modeling techniques to literally change the way water moves through the channels of a toilet to eliminate waste. Newer finishes fired into the chinaware give more power to less water. Not only do todays toilets use far less water, they actually clear the bowl even better than the old cottage model, brick or no brick. Those old guzzlers used anywhere from 3.5 to 5 gallons per flush (gpf). Today’s best use just 1.28gpf to 1.6gpf. Dual flush models, which are now very common, are estimated to use on average 0.96gpf based on five flushes/day/person with only one 1.6gpf flush and four 0.8gpf flushes.

Much of the water-saving focus is on the toilet for good reason since it is estimated toilets account for about 47 per cent of household water usage but improvements have been made in other areas also. Low flow aerators on taps are mandated however I discount the effectiveness of these in a residential setting. If you are filling a pot, or a sink or a glass, a slowed down flow rate will not necessarily cause you to fill it with less water, it will simply take longer. Shower heads are a different story however and there have been great improvements with these. Back in the early 1990s when lower flow shower heads started to appear they were not very effective at all. Showerheads had flowrates in the range of three to five gallons per minute. To reduce these manufacturer’s simply added flow restrictors to their old models. Most plumbers, myself included, would routinely remove these rather than face the complaints of their customers.

The industry did get better and there are countless models of showerheads that perform very well at flow rates as low as 1.5 to two gallons per minute, and they are engineered to do so from the ground up, this means no easily removable flow restrictor. On the other hand, the multi head, water guzzling car wash showers are more and more popular these days, they were very rare 20 to 30 years ago, so in this respect we are moving backwards when it comes to conservation.

Today technology has truly given us the opportunity to significantly reduce the amount of water we use to live our daily lives and it really is in all of our interests to do so. I do not think most of us want to be seen by the rest of the world as wasteful. The technology exists to move us closer to the European average water usage, which is about half of our current average, the only thing that stands in the way is ourselves.

There is an old saying; “We never know the worth of water till the well is dry.” Let’s not prove this, nor the words of the ancient mariner, true.

Steve Goldie learned his trade from his father while working as a plumber in the family business. After 21 years in the field, he joined the wholesale side of the business in 2002. He is frequently called on to troubleshoot systems and to share his expertise with contractors. He can be reached at sgoldie@nextsupply.ca.