Delivering on the promise of renewable energy

Utilizing the heat migrating up from earth’s 6100C inner core to produce electricity (geothermal energy) and to help comfort condition buildings year-round (geothermal HVAC) seems like a logical choice. The question is why aren’t we doing more of it? The geothermal industry in Canada has sputtered along like an old car for years, all you ever hear is: “It’s too expensive.” 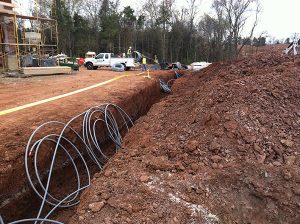 It is time to take the leap and embrace geo for heating and cooling needs, says Ian McTeer.

Rather than building and maintaining extensive pipelines carrying natural gas into subdivisions or dodging lumbering tanker trucks carrying fuel oil or propane down residential streets, geothermal systems rely on locally produced heat energy to function like any other kind of HVAC system. Once the earth loop is properly installed, it will provide a source of free heat during the winter and absorb heat transferred out of the conditioned space in the summer.

WHAT DOES GEO DO BETTER?
A geothermal system has no system components exposed to the outdoors; no outdoor coil to defrost or clean, no condenser fan motor or blade to be damaged by ice buildup, no electronics to troubleshoot with frozen fingers, and no noise. Everything outdoors is buried underground or submerged in a large pond or tucked safely into a drilled-well pipe.
The earth loop, when properly installed, will last for generations; the high-density polyethylene pipe (HDPE) typically has a 50-year warranty and requires no annual maintenance. A geo system literally harvests renewable energy from the earth – there are no locally-produced greenhouse gas emissions.
Geo systems can be used in more extreme climates; geo systems can provide domestic hot water using a desuperheater option, or provide heated water for in-floor and other hydronic applications in residential and commercial buildings. The best geo units can deliver consistent COPs of 4.0 or better regardless of outdoor air temperature. It seems like geo could conquer the comfort conditioning universe.

IS GEO FOR EVERYONE THEN?
Like any other technology there are some practical limitations to the scope of geothermal installations. Horizontal loop systems are the most cost effective but require a considerable amount of land relegating this type of geo systems to rural areas away from dense urban applications. After the installation of a horizontal loop is completed, the land above cannot be used for much else other than gardening, not unlike a septic bed. Horizontal installations require extensive trenching leading to a considerable amount of landscape disruption. In some situations, a horizontal boring machine can be used to push the necessary piping underground right into the building with a minimum of trenching. 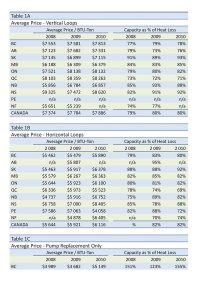 Vertical loops can be used when space is limited or when loose, rocky soil prohibits a horizontal loop. Vertical systems are very efficient, especially when drilled into solid rock, but the cost of drilling wells several hundred feet down to accommodate the U-shaped pipe loops makes this method the most expensive. Special equipment and skilled drill operators are required – this is not a DIY project.
The type of loop to be used in any geo application must be specified by a person familiar with hydrology and well versed in installation techniques. Geothermal installations in Ontario are covered by a range of government regulations, including the Water Resources Act, Environmental Protection Act (including Ontario regulation 98/12 dealing with risks and mitigation practices associated with encountering hazardous underground gasses) and the Building Code.

LOW VELOCITY AIR DELIVERY
Heating with a geothermal system means that air delivered to the conditioned space is at a considerably lower temperature than that of an oil furnace, for example. Some oil furnaces have a maximum temperature rise of 85F, gas furnaces range from 35F to 70F, but a geo system might only be able to achieve a 35F rise.
To avoid customer complaints about too much cold air blowing around, the geo air handler and associated duct system must be properly designed and installed. In retrofit jobs or new installations, it is imperative to deliver the appropriate volume of air at the lowest possible velocity. High velocity airflow from a conventional duct system causes noise and cold air complaints.

A PRICEY OPTION
The main reason many potential customers shy away from geo is first cost. According to statistics from 2010 released by the Canadian GeoExchange Coalition (CGC), the average installed cost of vertical loops in Canada was $7886 per ton based on systems designed to cover 80 per cent of the heat loss. CGC reported the Canada-wide average cost of horizontal loops at $6116 per ton.
Retrofit installations costs could easily balloon to breathtaking levels once any necessary duct renovations are added into the accounting. Duct remodeling is not confined to geo as I have noted before, many existing duct installations are delinquent in some way or other.
Normally I do not endorse governments subsidizing one industry or another. Yet, Canada is firmly on the path to reducing greenhouse gas emissions, an enormously expensive exercise. It is true that buildings use 40 per cent of global energy, but mandated efficiency improvements are too burdensome for the average building owner to bear alone.
Switching a good chunk of Canadian homeowners over to geothermal HVAC in order to meet Canada’s global GHG emission reduction promises is going to need a focused governmental carrot and stick approach. The carrot is bundles of cash; the stick is prescriptive rules and regulations designed to ensure the money is not wasted on second rate installations.
Comprehensive commissioning reports by geo contractors for each installation should be required. Given that HVAC contractors are already overburdened providing seemingly endless amounts of information to governments, relief from excessive paperwork should be part of future green energy schemes.

WHAT’S HAPPENING WITH GEO TODAY?
Perhaps help is on the way. Jay Egg, of Egg Geothermal Consulting, noted in a recent article published in renewableenergyworld.com, that energy utilities transporting natural gas to customers will be in a bind as gas heating is phased out in the coming years.
Egg points out that, “An energy utility would find it attractive to harvest free solar thermal energy, and have the ability to charge a monthly service charge…geothermal piping may be too expensive for the average consumer unless the first cost is distributed over a long period…the cost can be paid through reasonable monthly service and maintenance charges.”
Imagine that, rent your loop; a traditional gas bill replaced by a geo loop rental fee.
Unfortunately, once the cornucopia of various provincial and federal government incentives for geo conversion started to dry up in 2010 and beyond, the industry literally fell off a cliff as installations dropped by 28 per cent in 2010 alone, according to CGC. Geo systems are still being installed, usually off the gas pipelines in rural areas.
I spoke to Jimmie Thom, president of ATEL Air in Williamsburg, ON. Thom told me he just got an order to install nine geo units this winter and his company still does around 15 units per year, mostly retrofits. He said, “I have been installing and servicing geo since 1985…mom said to get an education and you will NOT be digging ditches for a living…I love digging ditches for geo.”
Glenn Geddes of Glenmar Heating and Air Conditioning in Fall River, NS told me geo installations down east have been few and far between, it is simply too expensive.
Egg also mentioned the Ontario Geothermal Association’s general meeting (which took place February 21 and 22–see HPAC March for the conference report).
While it sounds like some promising news for the geothermal industry may have come out of this conference, existing experienced geo contractors such as Thom and Geddes worry that a rush to implement a wide-ranging geo installation strategy will attract too many of the great unwashed – those so-called contractors looking to make a quick dollar or two every time government money pours in. Not only do the “trunk slammers” steal good work from legitimate contractors using lowball pricing, they invariably leave a trail of subpar installations. These cost the industry dearly as someone has to fix the problem, to say nothing of the poor public relations.
I am hoping provincial geothermal organizations will step up their training and certification programs and that the Canadian GeoExchange Coalition will be revived (see HPAC March p20) to form a watchdog organization charged with helping contractors and homeowners alike to reap the benefits of geo’s renewable energy promise. Yes, it is time to do this.
Ian McTeer is an HVAC consultant with 35 years experience in the industry. He was most recently a field rep for Trane Canada DSO. McTeer is a refrigeration mechanic and Class 1 Gas technician.

WHAT ABOUT AIR SOURCE HEAT PUMPS?
I am currently living with an AHRI rated 15.5 SEER, 12.0 EER, air source heat pump. A Heating Season Performance Factor (HSPF) of 9.0 is listed for Region 4; however, Canada is Region 5, thus a corrected Region 5 HSPF is 7.8 (Region 4 ÷ 1.15). An equally important metric is the coefficient of performance (COP) used to measure heat pump efficiency. COP is the ratio of energy input into the system versus the heat output of the system in watts.
Any air source heat pump worth installing has a minimum COP of 3:1 at the high temperature rating standard of 47F (8.3C). Thanks to the refrigeration effect (the fact that it takes much more heat to make a fluid change its state as opposed to simply raising its temperature), all heat pumps have an inherent force multiplier. Thus, at a 3:1 COP, for every watt put into the system at 47F, three watts of usable heat will be returned from the system. Conventional air source split system heat pumps suffer from declining COP as the amount of heat available in the outdoor air diminishes with increasingly colder air temperatures.
WHAT ABOUT DEFROST?
The temperature evaluation metric of 47F for conventional air source heat pumps is important to remember because that is the lowest outdoor air temperature a typical unit can be expected to operate at or above without requiring a defrost cycle. At 47F, the refrigerant inside the outdoor coil will be at 32F, encouraging moisture in the outdoor air to freeze on the coil blocking air flow and reducing heating performance. Modern electronic defrost systems are better at determining when defrosting is needed while also limiting the time a unit stays in the defrost mode. Defrost controls monitor the process and indicate faults, such as when too many defrost periods are terminated by time instead of coil temperature.
December 2016 (744 hours) was fairly mild but plagued with damp weather, with temperatures hovering around the freezing point. Sleet, snow, freezing rain and rain were the hallmark of the shoulder seasons this year and last, which forced most air source heat pumps into defrost overdrive. My heat pump spent a total of 2.55 hours in defrost mode, that is 1.3 per cent of its total vapour compression heating hours (195 hours) in December. During those defrost hours not only was propane being consumed at 100 per cent of input, the compressor was operating at second stage, transferring precious heat outside to repeatedly defrost the coil. My January 2017 hydro bill convinced me that I should allow propane to take over my heating requirements.

I am aware of the advances many air source heat pump manufacturers have made in designing better defrost systems, so there will always be a role for air source units.