As programs drive the adoption of new technologies, does the industry have the capacity to keep up? 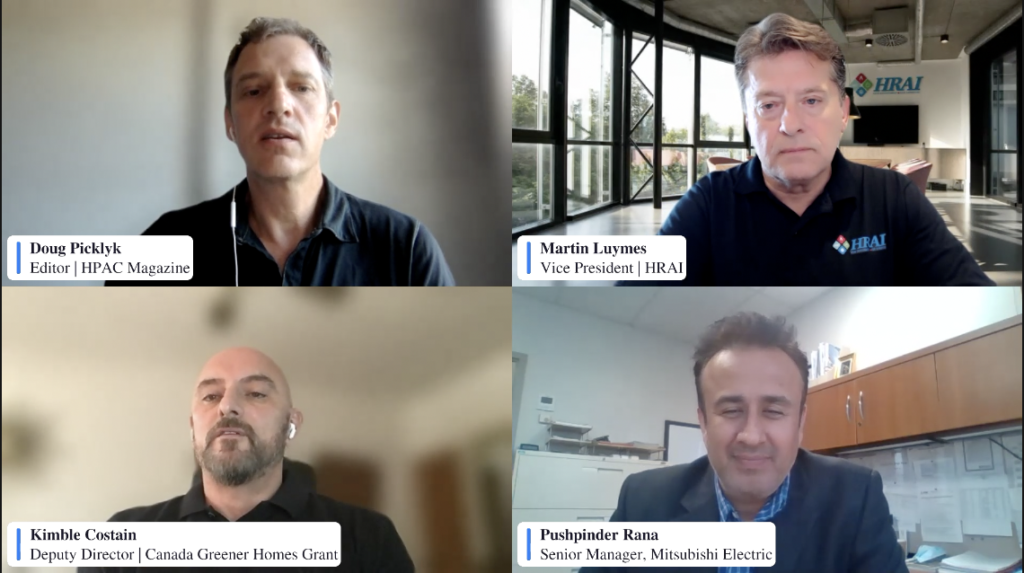 “I like to joke that we broke the Internet,” says Kimble Costain, deputy director of the Greener Homes division of Natural Resources Canada (NRCan), referring to the initial launch of the Canada Greener Homes Grant which opened its online portal on May 27th, 2021.

The federal grant program that has $2.6 billion to spend over seven years is designed to incent energy efficiency and resiliency upgrades in up to 700,000 homes across Canada by providing up to $5,000 to homeowners for certain approved retrofits.

“We certainly did crash the NRCan service,” admits Costain, noting that the program received over 9,500 applications on its first day, and by the end of that month [five days later] had 32,000 applications.

“We’ve issued grants to almost 19,000 homeowners, and so far almost $70 million in grants have gone out to those homeowners,” he says, adding, “We’ve got a long way to go.”

Constain made these comments during a live online panel discussion hosted by HPAC and Electrical Business magazines as well as Energy Manager Canada, the online source for plant and facility managers, building operators and owners who are involved with managing a facility’s energy systems.

The online event was held September 8th and was the second instalment of the Road to 2030 series which is exploring the implications of the federal government’s 2030 Emissions Reduction Plan for the HVAC and electrical contracting industries in Canada. The hour-long panel discussion was sponsored by Mitsubishi Electric.

Where the initial Road to 2030 event discussed the opportunities available to contractors as the government targets reducing overall greenhouse gas (GHG) emissions by 40% to 45% below 2005 levels by 2030, this second session addressed how existing incentive programs are currently affecting property owners and trade contractors in the race to emissions reductions.

Following the initial rush of the Greener Homes Grant program, the initiative continues to receive roughly 300 applications a day, which is leading to upticks for renovation projects across the country.

But as Martin Luymes, vice president of government and stakeholder relations for the Heating Refrigeration and Air Conditioning Institute of Canada (HRAI) acknowledges, “The HVAC industry doesn’t need programs like these to succeed.” 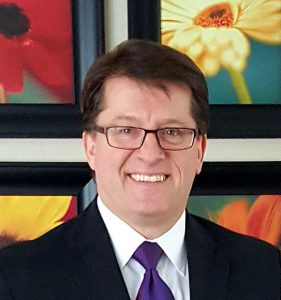 “I only say that because we have to remind government sometimes that they shouldn’t think of these programs as job creation measures strictly for our industry—like it’s a favour to the sector. But having said that, the industry does like programs of this type.”

Luymes added that the evidence shows that incentive programs like this depend on HVAC contractors to succeed because it’s the HVAC industry that engages with Canadians in their homes on a daily basis.

“They really are at the front end in many ways of programs of this type, and that’s just important to recognize,” he says.
With respect to the Greener Homes Grant program specifically, Luymes notes that the initial reaction from the industry was very enthusiastic, although the program did kind of “stumble out of the gate early on.”

There were some concerns about a lack of consultation with industry regarding details about product categories, eligibility and product listings that weren’t accurate. “The good news is that almost all of those issues have been resolved satisfactorily,” says Luymes, and he applauded the collaborative work between NRCan and organizations like HRAI and indicated that discussions are ongoing to continue improving the program.

“We do find that when these programs emerge lots of new companies come into the marketplace and begin selling rebates, and they’re pretty good at it. But can they deliver in terms of a quality installation that leaves a satisfied customer? That’s another question.”

And while Rana sees overall equipment buying decisions in this category not being heavily driven by grants and policies, there are benefits to be found. He points to residential new build condominium projects in Toronto as an example, where some of these buildings are installing air-source VRF systems and different heat pump formats, and these buildings are qualifying for the Toronto Green Standard (TGS) development charge refund program which offers a partial refund on development charges paid if the program qualifies as a sustainable or high-performance development project.

The TGS multi-tiered program for example, now on version or tier 4, provides increasing incentives as more energy efficiency and carbon reduction is included. 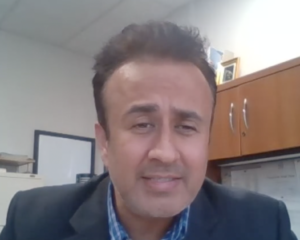 “There can be a huge return on your development charges, maybe as high as 20% to 50%, and this is in millions of dollars when considered part of the overall development project,” says Rana.

“So as a developer, if you can meet the higher tier levels just because you pick the right product which can help you to hit your thermal energy demand intensity (TEDI) level, which is set for each building type and for each tier type, the more money goes back to your pocket, which is certainly a huge incentive or attraction.”

Overall he is seeing the heat pump market evolving in Canada, becoming the primary source of heating or cooling as well as air-to-water systems providing domestic hot water. A market that may be expanding more rapidly on the west coast.

With regards to heat pumps, Costain shared that heat pumps represent the number one retrofit being undertaken by homeowners in the Greener Homes program.

Of the almost 19,000 homeowners that have received funding already, 34% have undertaken a heat pump installation, that’s almost 6,000 heat pumps purchased and installed. And for 75% of those homeowners, it’s the only retrofit they’re doing.

The top three provinces for heat pumps installations are New Brunswick at number one, followed by B.C. and Ontario. 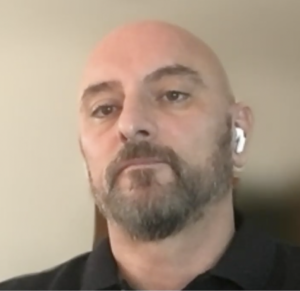 As the program is targeting 700,000 homeowners nationwide, he extrapolates that if the program continues at the current rate, we’re looking at a quarter of a million heat pumps to be purchased and installed over the next five years.

“That’s both an incredible opportunity, but also a challenge, and I think we recognize that.”

That federal push towards heat pump technology overall does place the HVAC industry in a critical situation. HVAC contractors and consultants need to be trained, and contracting businesses need to invest in that skill set because they are in the role of raising the level of heat pump literacy among business and home owners.

“I think programs like Greener Homes and the huge numbers we’re seeing in the uptake of heat pumps is sending the market signals that folks need to react to and recognize that heat pump technology, although it’s quickly evolving, is here to stay,” says Costain.

Along with understanding the technology it’s also important that property owners understand the economics of purchasing a heat pump including issues like the cost of maintaining and operating a heat pump versus existing fossil fuel technology.

There may also be the challenge of reconciling that the upfront costs might be a little more, but it’s going to be beneficial and more economical in the long run.

“We come across this dilemma time to time,” says Rana. “I think there is some misconception in the market in general, and to be honest, the installation cost is not high.”

“This is where our training programs play a huge role. We are spending a lot of time, resources, and money to train both the consulting engineers and the contractors, and I’m sure other manufacturers also have similar programs.”

He insists that when contractors are sufficiently trained and have the right skills in hand, the installations can be undertaken more quickly without any mistakes, and time is money.

“So when you talk about the cost of heat pumps systems, for a well-trained contractor the overall cost of installation is actually lower than what we think.”

He also notes that manufacturers may offer incentives tied to their training programs, whereby they can offer premiums like an extended warranty on some products installed by qualified professionals, which can be a huge incentive for a contractor.

Educating and training consulting engineers also is key to large projects when considering how to create the best fit with the application, with the building type, and to make sure they are proposing the right product so that builders/developers can meet all the required standards—whether GHG reduction, carbon footprint, running cost, or the total cost of ownership.

Martin Luymes forsees a bigger structural issue for an HVAC industry that’s been trained for decades on how to sell gas appliances.

“The structural issue I’m talking about is, we have an incentive program heating up demand for a certain category of products, and really an insufficient number of contractors who are in a position to deliver that product,” he says.

So his concern is not just an issue of how to sell the technology, but it’s the fundamental ability to work with the technology, to install it and to service it. And like most trades-based industries, there are not enough technicians to begin with and now we have to reskill a lot of people.

Luymes suggests that contractors will adapt over time to new technologies, but they may not be able to do it at a pace that will meet existing targets.

One of the challenges now for installing heat pumps is the qualifications required. Installers with a refrigeration license are more than qualified to install a residential heat pumps, but they’re more likely working in the commercial sector. So organizations are working to establish a residential heat pump installer trade that would allow working on equipment up to five tons. It exists in some provinces, but it’s not nationwide.

“There are not nearly a sufficient number of qualified technicians to do the work, which just leads to the question, who’s doing all these installations?” asks Luymes.

In closing, Luymes added that NRCan has asked that the industry channel specific recommendations for their programs through HRAI where possible, as this would allow the association to distill common requests into a streamlined series of suggestions.

“So that’s an invitation,” he says. “If you have specific issues around the Greener Homes Initiative, you can send me an email (mluymes@hrai.ca) and I’ll bring it forward through that process.” <>