Whether it is a new build or renovation project, air tightness isn’t a given. Pinpointing air leaks in a home or building can save energy and improve comfort – and the green building boom has made constructing airtight structures essential.

Chad Deschenes, head inspector and owner of Alberta-based CHP Inspections & Consulting Services, says this has allowed services such as blower door testing and thermography to gain traction.
“Everybody wants to get into it. It’s like the new gold rush,” he says.

The renewed interest in blower door tests, which use a specialized fan to depressurize a structure to locate air leakage, is largely thanks to building codes in cities such as Vancouver that require energy audits when retrofitting an existing building, Deschenes says. 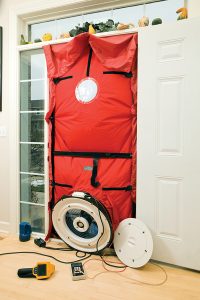 “More and more, with building air tightness, this is where we have a lot of issues with energy efficiency, air infiltration, which cause environmental issues such as mould in buildings, especially in colder climates,” Deschenes adds. “This is where the issues are arising and this is where they’re implemented more from the provincial or federal governments.”

When it comes to blower door, there are two types of tests: building envelope and energy audit. An energy audit tests a structure as it functions on a regular day.

“With a building envelope test, you’ve got to close off all the vent systems, everything. You need to make sure all the steps are taken,” he says. “This includes multiple people at the doors to make sure they’re not open during the test.”

He adds that a building envelope test could take anywhere from one to three days of preparation.
“Depending on the location, you might have to rent heavy equipment to get to these areas if it’s not accessible. You’ve got all your safety gear, your safety harnesses,” he says. “It’s pretty intense.”

For Deschenes, thermography is an essential technology for building envelope inspections. Using a thermal imaging camera, the company’s team can locate energy inefficiencies or property defects.
“With blower door testing on a building envelope, they’re looking for a specific ACH (air changes per hour) number – that means how tight that building is, how much air infiltration is coming into the building,” Deschenes says.

“A lot of firms are wanting to build these homes and buildings very airtight… What happens is, if it fails, people want to know, ‘How do we know where we failed?’ That’s where thermography comes into place.”
Deschenes, who operates throughout Alberta and British Columbia, says the popularity of blower door testing has a downside.

“There are a lot of people in this industry trying to do blower door testing, but they’re not specifically trained, and there are no requirements that you have to be,” he says. At the same time, he notes that contractors can’t just buy the piece of equipment and perform the testing without knowing the proper procedures.

The company performs most of its work on commercial buildings and some specialized residential projects. To get the job done correctly, Deschenes says the team invests in training.

“If it is going to affect someone’s life, we want to make sure we’re doing ite right,” he says.