The Duct Free Zone: The Magic of Refrigerant

What many of our customers (civilians) don’t know, and what many of us professionals take for granted, are the unique characteristics of refrigerant.

It is believed that man … early man, discovered fire around two million years ago. Now, I’m old, but I’m not that old, so I have to take the scientists’ word for it.

I suspect within a short time after discovering fire, using it for the purpose of creating heat became one of its earliest practical uses.

Water, being abundant and readily available, then became the obvious media for heat transfer — heat the water with fire and then move the water, or the steam it produced upon boiling, to areas that required heat. Hydronic heating systems can be traced back to the end of the 14th century, and steam heat is documented as early as 1784.

So, it’s not surprising that most of us, when we think of central heating systems, picture fire and water as the key elements.

Now, with the advent of air-to-air heat pump systems, many of us struggle to understand how a system that does not utilize fire or water, can extract heat from outdoor air temperatures as low -30C (-22F).

Well, the answer is magic!

…not buying it, right?

Well, it’s magical in my opinion.

What many of our customers (civilians) don’t know, and what many of us professionals take for granted, is the unique characteristics of refrigerant. Along with some really cool compressor technology, it is refrigerant that makes extracting heat from seemingly crazy cold outdoor air possible.

I need to come clean with you about the motivation for the subject matter of this article: I was asked to participate in a project sponsored by the Heating, Refrigeration and Air Conditioning Institute of Canada (HRAI). The project involves creating a document that explains the different types of heating technologies in terms that the typical civilian would understand.

The project was birthed out of the new strict energy conserving and decarbonization codes recently enacted in Vancouver. My portion of the project is to create a civilian-friendly explanation of the air-to-air heat pump. So, as my deadline for this article approached, I thought maybe I could kill two birds with one stone (it’s an old man expression, no birds were harmed in the writing of this article).

OK, lets get back to the task at hand …

What many civilians don’t know is that air conditioners do not add cooling, but rather they extract heat from a room. In this scenario, the evaporator (the coil in the room being conditioned) is passing room air over it (via a fan) and the refrigerant flowing inside the coil is absorbing heat from the room air and sending it to the outside unit (condenser) where the heat is extracted (again, via a fan) and dissipated into the outdoor atmosphere.

So, lets get to the magic part …

… is it starting to make sense now?

The transfer media (refrigerant) being used in an air-to-air heat pump is where the magic takes place, because without it, well, we would be back in the 14th century … OK, a bit of an exaggeration, but you get my point.

It’s also important to know that the refrigerant changes state (liquid to liquid/vapour to gas) as it circulates throughout the system. Mrs. Gillacuddy explained to us in sixth grade science class that matter can change state, but what she didn’t tell us is that when it does, it produces energy in that process — energy that an air-to-air heat pump translates into heat.

The advent of the inverter compressor, the “pump” in the air-to-air heat pump, has taken heat pump technology to yet another level.

I tell you this my friends because that is exactly how an inverter compressor works!

When the load is great (it’s hot inside) the compressor will run up to 3,600 RPM like every other compressor in the world, the difference being, when the load is less than great we can take our foot off the gas and as a result, use less gas—use less voltage—but you know what I mean … and when the temperature of the room meets Mrs. Gillacuddy’s setpoint temperature, her comfort number (20C / 70F) well, then the compressor goes into cruise-control, simply using just enough energy to maintain her setpoint.

Ok, we are getting close to the end here, but I do have to tell you about the latest advancement to the inverter compressor which adds yet another level of energy conservation and low outdoor temperature heating ability to the air-to-air heat pump.

The good people at the company I represent have created what they call the “two stage enhanced vapour injection compressor.”

Now, before I go any further, those of you who know me and have attended one of my product training events know that I am brutally honest … I tell you when I like something, and I also tell you when I feel something can be improved. In this case, I’m going to tell you that calling your compressor “vapour injection” is like saying your beer is “fired-brewed.”

… of course you beer is fired brewed, that’s what brewing is! The Stroh Brewery Company clearly had a clever marketing person who took something that every brewery did and made it sound special and unique.

The similarity here is that ALL compressors are vapour injection … we don’t compress liquid, do we? That would be bad … DAH!

What is special and unique about the this two-stage enhanced vapour injection compressor is the “two stage” portion of its description. 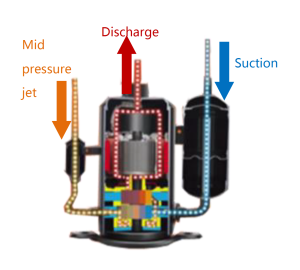 … adding a second “injection” point for refrigerant in a vapour state but at two different pressures allows for even greater production of energy (in this context, heat) because not only is energy produced when matter changes state, but it is produced when that matter changes pressure.

Well, those of you in the trade are probably thinking to yourself right now, “Yeah, I knew all that already.”

How I hope this article may help you is in relating what you know to your customer, or potential customer, when trying to sell the attributes of the air-to-air heat pump.

Technology has come a long way over two million years, and although much of it may seem obvious to the professional, it’s not a bad idea to take a moment and appreciate the “magic” that is found in our trade. <>

Gerry Wagner is the vice president of business development for Bathica in Quebec. He has 41 years in the HVAC/R industry working in manufacturing, contracting and training. You can contact Gerry by email: GerryWagner@Bathica.com and visit: www.TOSOTamerica.com