Imagine a benighted king travelling back to his drafty castle after a long day of abusing his serfs and annoying the local nobles. It is a cold winter’s day sometime after chimneys became popular but before the advent of central heating. Servants pile three-foot long logs onto an already roaring blaze. The monarch reclines in front of the crackling source of welcome warmth. How lucky for him that the high-backed chair parked in front of the fire protects his back from the frigid combustion air racing to help feed the fire. As the smoke rises up the newfangled chimney, it takes much of the heat with it. Yet, our monarch gradually overheats in his wingback chair demanding the servants move him farther away from the fire. He had no understanding of why a fire some distance away made him so uncomfortable.

The campfire effect, well known to campers, means whatever side one faces toward the fire gets warm while the other side remains uncomfortably cold. While many people still burn wood for heat, more efficient stoves and furnaces have replaced the roaring open fireplace. For others, sitting in front of a fire is more of a recreational pursuit.

HEAT FROM THE SUN

Incredibly, heat produced in a fireplace is transmitted through space to a body without directly affecting the surrounding air. Thermal radiation is defined as, “the transmission of heat through space by wave motion: the passage of heat from one object to another without warming the space between.”

Consider the largest “fireplace” burning some 93 million miles away: the sun. With a diameter of 864,340 miles (1,380,000 kilometers) and a core temperature of nearly 4,000,000 degrees Kelvin, the sun has been burning for over 4.6 billion years. Every second, nuclear reactions fuse 4 x 1038 protons into helium-4; four million tons of mass are converted into pure energy via E = mc2.

Over its lifetime, about 0.03 per cent of the sun’s mass has been converted to energy, that is approximately the mass of the planet Saturn. Fortunately for us, there’s plenty more mass left to convert into energy.

The sun’s surface, known as the photosphere, is composed of hot ionized gases around 6000C generating vast amount of energy. Visible light and infrared radiation emmitted from the photosphere reaches earth in the form of electromagentic waves travelling at the speed of light. The solar spectrum consists of several wavelenth regions distributing energy approximately:
Visible: 54 per cent
Infrared: 43 per cent
Ultraviolet: 3 per cent

Scientists have estimated an average of 58 Btu/hr (17 W) per square foot of solar energy incident on the land mass of the United States is many hundreds of times as great as the annual consumption of energy.

Atoms and molecules in any mass above absolute zero (-460F) have some energy causing motion that creates heat energy. Heat, for our purposes, is something transferred between two or more objects. When heat transfer between objects ceases, heating ceases. It is the transfer of heat we crave to understand and to promote more efficiently. We understand that heat transfers in three different ways:

1. Conduction: explains how heat moves through solids. The kinetic theory of heat suggests that heat enegy creates increased molecular action. As a substance absorbs heat, the heated, higher energy molecules bump into their neighbours setting them off into violent motion. Thus, heat is conducted from one substance to another.

2. Convection: heated molecules move from one place to another carrying heat with them instead of colliding with neighbouring molecules.

3. Radiation: heat energy transferred by electromagnetic waves. Radiant energy must first be absorbed by a material mass before it can be converted into sensible heat. 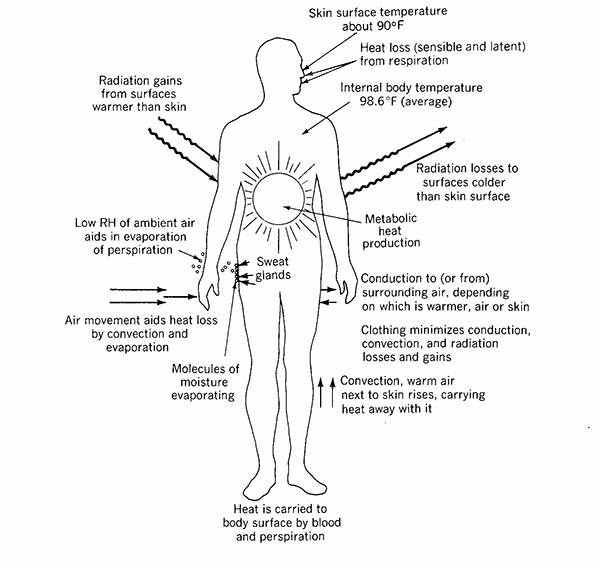 The human body is a fascinating example of heat transfer to and from the environment:
It should be noted radiation is not confined to very hot surfaces as all substances radiate heat energy. Hot surfaces will radiate large amounts of energy while cooler surfaces will radiate smaller amounts.
Glass has the peculiar property of transmitting heat energy from the sun directly into a building; however, once the radiant is converted to sensible by the buildings furnishings, occupants or other objects, the low energy heat energy radiation from these objects is blocked by the glass, trapping heat in the structure. Perhaps a desirable trait for the winter, but definitely unwanted during the summer. 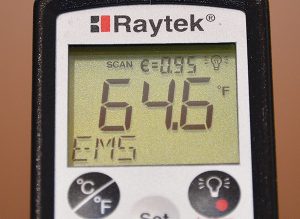 This infrared thermometer defaults to a near blackbody emissivity, which measures how well a material emits infrared energy.

Thermal imaging cameras and infrared thermometers have become popular tools in the HVAC industry in the last few years. Seemingly easy to use, it is even easier to make mistakes when accuracy is required unless the user has been trained in basic thermography. An infrared camera will immediately show surfaces at different temperatures but how do you distinguish between hot spots and reflections?

A thermographer needs to account for measurement details such as distance from the target, spot size and emissivity. An object with an emissivity of one absorbs all the solar electromagnetic radiation falling on it and is known as a perfect blackbody. An object that reflects 100 per cent of the electromagnetic radiation falling on it is a perfect reflector having an emmissivity of zero. 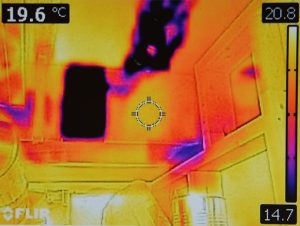 Example of using an infrared camera on shiny ductwork in cooling mode.

Perfect blackbodies and reflectors are not typcially found in everyday HVAC applications. A flat black surface such as a cast-iron stove has an emissitivy of 0.95, a shiny reflective surface such as tin foil registers about 0.10, meaning that only 10 per cent of the radiant energy is absorbed.

The Roman Hypocaust, developed as early as 350 BC, was a radiant system that utilized wood burning fires to produce and circulate hot air (and smoke). The hot air circulated through enclosed areas beneath the floors and then up the walls through embedded clay tiles to outlets in the roof.

Hydronic and steam systems favoured cast iron radiators placed around the interior perimeter of a building to radiate heat energy into the surroundings. If left free standing, the rads would also establish a convection current carrying heat further into the room. However, homeowners often enclosed the rads with elaborate structures meant to conceal them, inadvertently hindering heating efficiency. Eventually, finned-tube hydronic and electric baseboard convectors replaced radiators and convection heating became the norm. 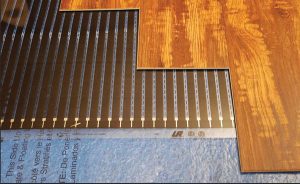 For those who can afford underfloor radiant heating, there is no other system providing such a level of thermal comfort in my opinion. Underfloor radiant allows for multiple zones in both hydronic and electric applications. Should the radiant floor not cover the entire heat loss of the building, it is easy enough to add some baseboard convectors to help cover the load on design days. With net zero or Passivhaus tight construction and controlled ventilation building techniques becoming more desirable, even prescriptive in some building codes, radiant floor warming may be plenty enough heat for such buildings.

Like any other heating device, any radiant application must be designed, installed and commissioned according to the manufacturer’s instructions and industry practices. Tubing can be punctured; electric cables can be cut or shorted.

Manufacturers make installation as easy as possible, but a proper job continues to require trained and conscientious installers. Electric radiant may be installed under many different floor coverings with heating elements embedded in a roll-out mesh or in single cable format not unlike hydronic tubing.
Electric radiant manufacturers provide warranties but the contractor typically is on the hook to provide installation data related to the electrical characteristics of the system measured before and after the installation.

Radiant floors work can well in many types of commercial buildings; others use gas-fired radiant tube heaters such as in the service reception areas of automobile dealerships to great effect.
Radiant panel heaters installed below the ceiling or on the walls may not have the desired effect in situations where furnishings and people are in sparse supply to absorb and reflect the radiation. Cool spots may develop that will garner complaints from the inhabitants. Better to do floor warming or baseboard convection.

At one time, industry consensus seemed to favour installing residential condensing units on the north side of a building when possible. The idea was to get the unit out of direct sunlight in the hopes that it will run more efficiently. A study conducted by the Florida Solar Energy Center in 2015 concluded the temperature of the air entering the condenser has the pivotal effect on efficiency, not local shading, including shade from trees or shrubbery. 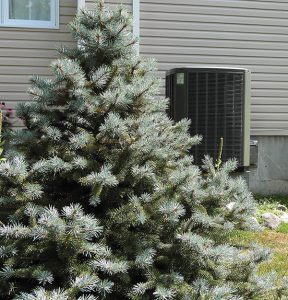 My outdoor unit moves 3200 cfm, if it runs for an entire hour. A staggering 192,000 cubic feet of air will pass through the coil during this time. No amount of shading will cool that amount of air enough to be effective at lowering the condensing temperature.

Placing a modern cold climate heat pump (ccASHP) on the south side of the building sheltered from prevailing winds and snow drifts is more desirable. Still, a lot of radiation will be required to warm the entering air enough to make a difference in the unit’s heating efficiency.

Homeowners often ask about hiding the outdoor unit with plants, shrubs and trees, which is OK but for two important considerations:
Vegetation must be trimmed to maintain a four-foot space to the unit. Airflow must not be impeded and falling leaves should not be allowed to enter the unit.
Vegetation must not impede service access – rule of thumb: something that is difficult to maintain does not get maintained.

In past articles, I have discussed how we are going to heat buildings, especially residential buildings, as efficiently as possible from now on. Should old forced warm air heating systems designed for yesterday’s furnaces be abandoned in favour of ground source heat pumps or ccASHPs; or inverter driven heat pumps utilizing small duct, high velocity air handlers?

There are many options but in the end the first cost of any system is the primary factor determining equipment selection. Electric radiant heating combined with a ductless cooling unit installed in a net zero or Passivhaus application might be attractive to the upscale set. However, for those looking at improving the bulk of Canada’s leaking old housing already radiantly heating the countryside, I would put my money on better insulation, tighter doors and windows along with a zoned ductless or small-duct high velocity system.

Remarkably, there is abundant solar radiant energy available yet it is not so easy to gather and to control. In 1976, physicist Amory Lovins, founder of the Rocky Mountain Institute, proposed a greater reliance on “soft energy paths” especially those efforts aimed at conserving energy and improving efficiency.
Had the notion of super insulation combined with zoned radiant heating, perhaps solar powered, been intensively cultivated years ago, fossil fuel heating would have become as obsolete as the cranky old king and his primitive fireplace.