Ten years ago, the term hydraulic separation was very new to the vocabulary used in the North American hydronics market. Back then the contemporary topic being discussed and applied was primary/secondary piping. The idea being that several loads, each served by its own secondary circuit and associated circulator, could be connected to a common primary loop, with its own circulator. The “magic” of closely-spaced tees is what prevented the flow rate in any of these circuits from interfering with the flow rate in the others.

In essence, that is what hydraulic separation is: The ability of two or more circulators within the same piping system to simultaneously operate without interfering with each other.

Before detailing other methods of hydraulic separation, it is important to understand the role of headers in a hydronic system. The “ideal” header in any hydronic system would simply split up the flow entering it into the branch circuits attached to it with zero head loss. The spherical header shown in Figure 2 would be a very close approximation of this ideal concept.

Imagine piping coming out of this spherical header in all directions, like a copper basketball with tubes coming out all over its surface. The water would be very “content” to flow through such a header, but imagine how this would look in a typical mechanical room. In short, it would look terrible. It would take up lots of room and be very difficult to install using standard methods. Bottom line: We do not build headers like this. Not because they would not work, but because of these other practical and aesthetic reasons. 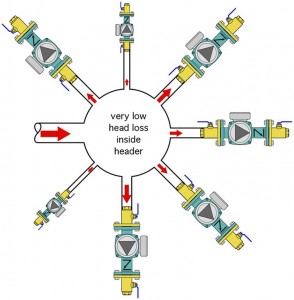 Instead, we approximate the favourable fluid mechanics offered by the copper basketball header with standard hardware that looks good and lays out neatly in a mechanical room, as depicted in Figure 3. 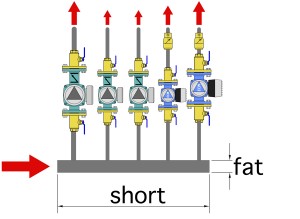 I like to call these “short/fat” headers. Simply put, the shorter the header and the greater its diameter, the closer it comes to approximating the copper basketball header. Remember, the goal is to split up the flow into the branches with as little head loss as possible.

So, here is something that every hydronic system designer can easily remember: Short/fat headers are good and long/skinny headers are bad. It is always good to keep the headers in your systems as short as practical and to use a tube size that keeps the flow velocity when all branch circuits supplied by the header are operating at no higher than two feet per second. Figure 4 is a table that lists the flow rates corresponding to flow velocities of two feet per second for type M copper tube. 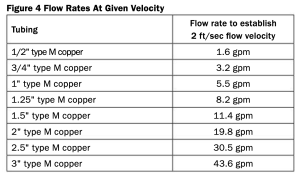 To maintain the hydraulic separation afforded by short/fat headers it is important that the headers connect to a piping assembly that itself creates very low head loss. One arrangement that achieves this is simply connecting the headers to a low flow resistance heat source, such as a cast iron boiler, or a “tank type” hydronic heat source, as shown in Figure 5. 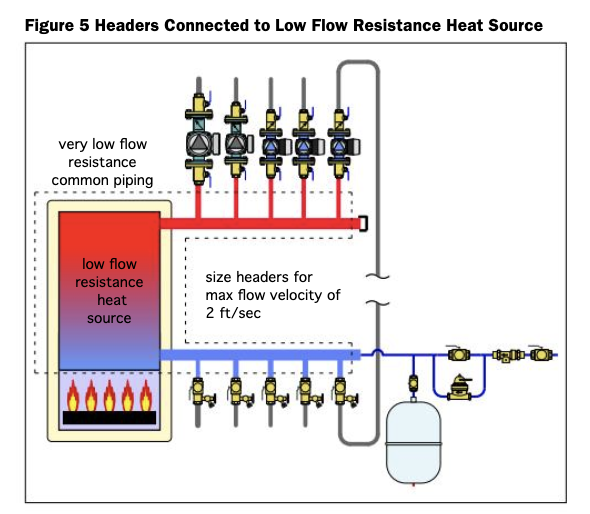 The piping in Figure 5 also provides the same supply water temperature to each load served by the header. This is not true with traditional primary/secondary piping where all sets of closely-spaced tees are arranged in series along a common primary loop. The latter arrangement creates decreasing supply water temperature in the downstream circuits. Furthermore, the extent of this temperature drop is not consistent. It varies depending on which secondary circuits are operating at any given time. 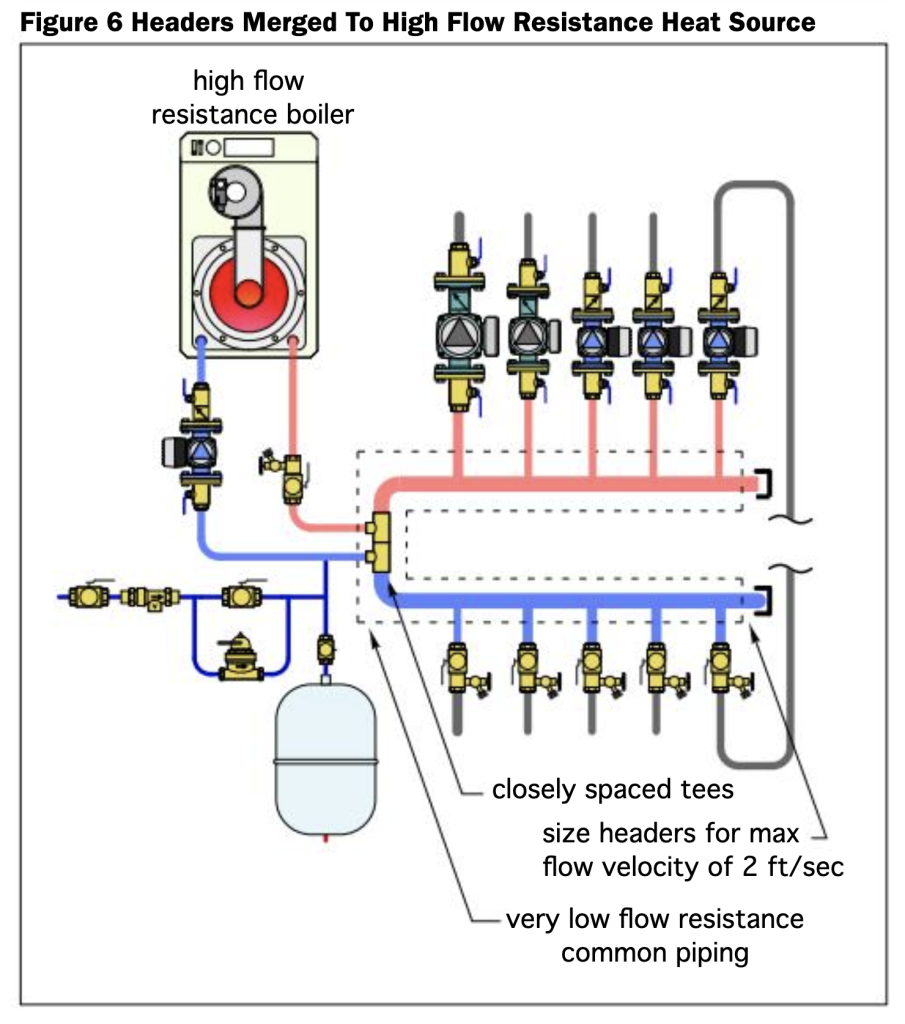 The pair of closely-spaced tees hydraulically separate the boiler circulator from the circulators on the header. Thus, the overall piping assembly within the dashed lines, (i.e., the common piping) has low head loss. Voilà: hydraulic separation between all circulators in the system.

If your system needs added thermal mass to stabilize a low mass heat source against the potential demands of a highly-zoned distribution system, then let a buffer tank, (piped as shown in Figure 7, and working in combination with the short/fat headers) provide the hydraulic separation. 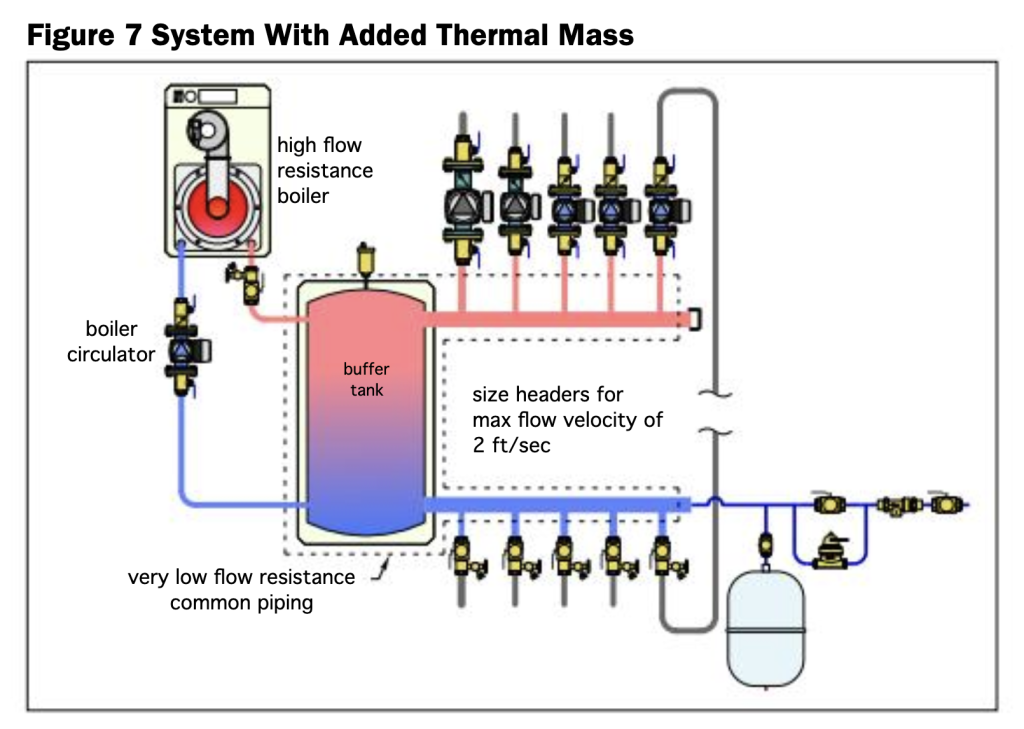 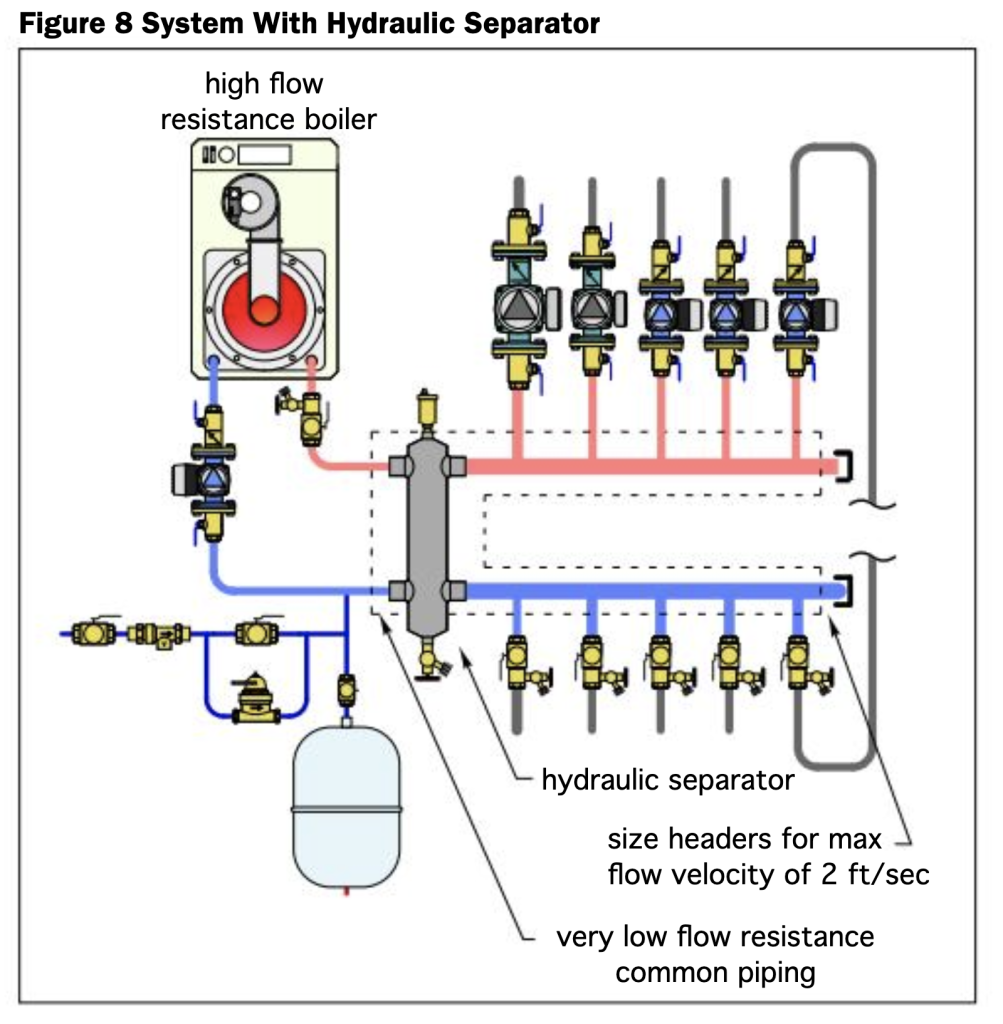 A second coalescing media, built into the lower portion of the hydraulic separator, enhances its ability to trap dirt particles that might be riding along with the flow as it returns from the distribution system. With multiple passes, some coalescing media can separate out dirt particles as small as five microns. They drop out of the active flow path and into the lower portion of the separator. A periodic opening of the valve at the bottom of the hydraulic separator can flush out this dirt.

There you have it: four methods of achieving the very desirable characteristic called hydraulic separation in your hydronic systems. Notice that all these methods provide the same supply water temperature to the loads and that none of them require a dedicated primary loop circulator. In that respect, the methods shown, in my view, are significant improvements over traditional primary/secondary piping. Integrate them into your designs where appropriate. <>

John Siegenthaler, P.E., is a mechanical engineering graduate of Rensselaer Polytechnic Institute and a licensed professional engineer. He has over 44 years experience in designing modern hydronic heating systems. www.hydronicpros.com