Often misdiagnosed, take a system-wide approach when searching for root cause problems with AC and heat pump systems. 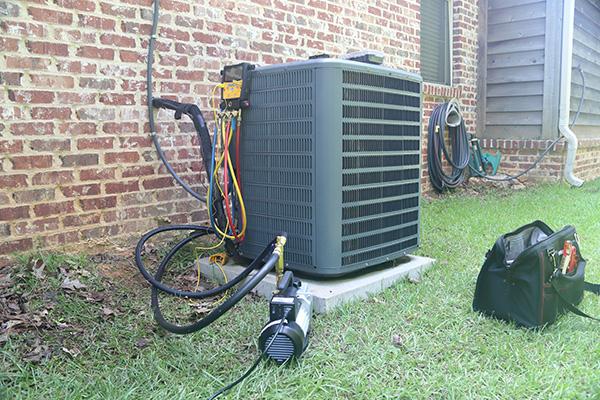 Thermostatic expansion valves (TXVs) are often misdiagnosed as the root problem in poorly performing air conditioning and heat pump systems. The truth is that two-thirds of TXVs returned show no signs of failure. For this reason, we recommend taking a system-wide approach when troubleshooting. Eliminate all other components as a source of a system’s performance issues before investigating the TXV as the culprit. 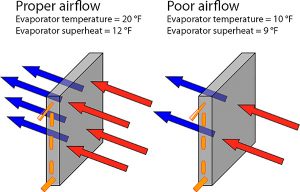 Low airflow is one sign that the cooling system is not functioning properly, and it has nothing to do with the TXV.

Figure 1 shows two identical evaporators being fed by a TXV with the evaporator on the left getting adequate airflow while the one on the right has inadequate airflow (note the superheat values and evaporator temperatures). Low airflow can be caused by a dirty or clogged air filter or a malfunctioning fan or blower motor, so be sure to investigate those components as the source of insufficient airflow.

An obstruction in the liquid line, such as a clogged filter drier or smashed or crimped liquid line tubing, can produce flash gas (see Figure 3), even though there is a proper refrigerant charge. Make sure to check upstream for blockages if there is flash gas at the TXV inlet. Check subcooling at both the condenser outlet and the TXV inlet prior to adding any refrigerant. A dirty or clogged filter drier is a potential culprit, especially since they are most often installed upstream from TXVs.

Ensure that the valve has been correctly installed: inadequately brazed fittings or mounted bulbs will negatively affect the TXV’s ability to operate. Inspect the valve, looking for physical signs of damage, such as dents in the power element, kinks in the tubing or signs of overheating like discoloration. 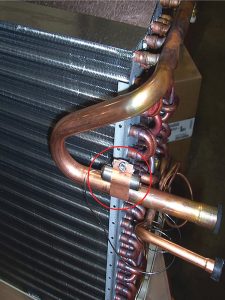 If the bulb mounting is loose, it will cause the TXV to overfeed, possibly flooding the compressor. Since 50 per cent of the heat absorbed by the bulb can come from the bulb strap, always use an OEM-recommended bulb strap (as shown in Figure 4). The sensing bulb should be securely mounted on the evaporator outlet downstream from the refrigerant header, in a position on the pipe least affected by liquid refrigerant and oil, and mounted before the equalizer tube. 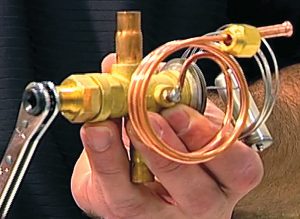 If these issues cannot be corrected by any other way, adjust the valve’s superheat. Note: adjusting the superheat should only be done after all other corrective measures have been taken.

When adjusting the superheat (as seen in Figure 5), verify the rate of change per turn of the superheat spindle for the specific TXV (for example, on Danfoss TR 6 valves, one turn clockwise equals a one degree Fahrenheit increase). Be sure to note what changes are made to the superheat as it may be necessary to return the valve back to the original setting. Adjust the superheat one or two degrees at a time and give the system 10 to 15 minutes to rebalance. Once the valve is feeding, monitor the superheat as the system goes through a pulldown. Whenever possible, compare the superheat to information provided by the equipment manufacturer.

A plugged TXV will underfeed the evaporator and produce symptoms that include the evaporator operating under a vacuum or very low pressure. A plugged valve will not respond to a superheat decrease or will suddenly open up if superheat is adjusted downwards. Some TXVs have an inlet strainer. If the valve has a removable one, it may be removed and cleaned. 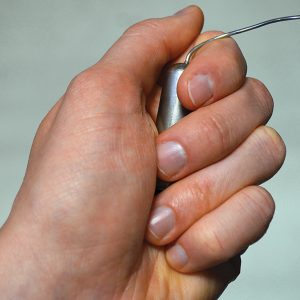 Another potential cause for underfeeding is a lost bulb charge. Since the bulb pressure is responsible for driving the valve open, if the pressure is reduced or lost, the evaporator and spring pressures will drive the valve closed. A quick way to check for this is to warm the sensing bulb. Simply hold it in your hand for a minute or two (as seen in Figure 6). If the bulb charge is fine and the valve is not stuck or seized, it should respond by opening. 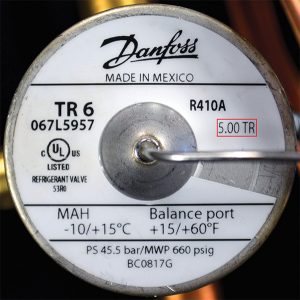 A final potential cause for underfeeding is a valve that is too small, which will significantly hinder performance. Check the valve’s rated capacity (highlighted in Figure 7) against the OEM’s recommendations. The valve capacity should be equal to or greater than the OEM’s capacity rating.

If, after all other variables have been eliminated and the superheat has been adjusted, the TXV is still not functioning properly, replace it with a new correctly-sized valve. When removing the failed valve it is important to cut it out rather than sweating it out, as sweating may damage the valve and the manufacturer will not be able to determine the source of the malfunction when it is returned.

We recommend changing the filter drier every time the system is opened as insurance against future problems.

Jeffrey Staub is director, regional applications Americas – Danfoss. He can be reached at JeffStaub@danfoss.com.