Time For A Rethink – Multiple Boilers

Multiple boiler systems call for a multitude of design considerations.

The last 10-15 years have seen more dramatic changes in technology available to the hydronic industry than the previous 100 years. The development of condensing boilers alone has improved efficiency and reduced fuel costs over previous generations of boilers. But along with these improvements has come the need to rethink traditional designs. Doing things the same old way with modern equipment can defeat the improvements and possibly even take us a step back from any gains are be expecting.

There is a lot of information out there about condensing technology and high mass verses low mass design and these ideas do need to be carefully considered if we want to get the designed efficiencies out of the high efficiency boiler plant. Beyond that is the concept of more than one boiler in a single system and hybrid condensing and non-condensing combination designs and that bears further discussion.

First, let’s look at when do we want a system with more than one boiler? Redundancy is one reason. We may want to have a backup in case a boiler goes offline for service, etc. Another reason could be space or accessibility. With many retrofits it is not possible to get a large boiler into an existing boiler room because of the way the building was constructed.

The biggest reason however comes down to the building load turndown. That is the difference between the design load (the amount of heat required on the coldest day) and the base load (the amount of heat required on a warmer winter day in let’s say October or April). Figure 1 shows the typical seasonal need for heat for Toronto averaged over many years but the number of hours is pretty consistent throughout most populated areas in Canada.

Even Edmonton, with a design temperature of -34C, only spends about 25 hours a year at design temperatures. If we want to prevent the boiler from operating short cycles during base load conditions and still have enough power to handle the peak load, we need to consider the system turndown and compare it to the boiler’s turn down capacity. This is why we must understand the technology behind condensing boilers and how to operate them efficiently.

The most common condensing type boiler on the market is the wall hung, modulating/condensing variety. These are typically low mass (small water volumes) with high heat impact heat exchangers (they transfer large amounts of energy on a small surface) and modulating burners (they vary their Btu output as required). All are built to a national standard that determines how much difference there can be between low fire and high fire in the output of heat.

Several manufacturers build some of their boilers around a smaller than 5:1 turndown for various reasons as well. In this instance it may be more beneficial to install two or more smaller boilers that together can handle everything between the design and base loads, because each boiler can deliver a 4 or 5:1 turndown. This only works if the staging controls can consider both boilers as a single operation, what we might call a cascade control, which will be addressed later.

Two boilers will also increase the system’s mass. Higher mass is good. Plus, condensing boilers are more efficient at lower firing rates, so a two boiler system, where both boilers are operating at 25 per cent output may be more efficient than one boiler is when operating at 50 per cent output. If both boilers are the same size both scenarios provide the same Btus to the space. The ability for the controls to operate the boilers as a team and not as two individuals is very important here.

So how many boilers will you need? We want enough boilers to provide an adequate turn down to handle both peak and base loads without short cycling. As a rule of thumb, the minimum output of a single boiler should be about what we expect for the building’s base load.

Some of the pitfalls of multiple boilers are, more boilers mean: more standby losses, more maintenance, higher installation costs for materials and labour and more controls. 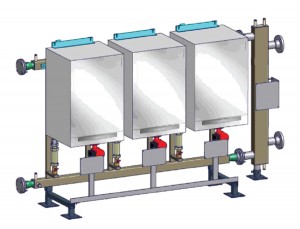 With low mass condensing boilers you should probably consider a primary/secondary piping layout. If you are going to go multi-boiler, then it is a must. Some manufacturers offer prefabricated manifold options for their wall hung boiler as shown in Figure 2. This makes piping simple and efficient and reduces the amount of labour needed to pipe up the primary loop. It also allows for a design that will offer the correct flow through each boiler regardless of the varying flow through the building secondary loop (see Figure 3).

I mentioned that condensing boilers are more efficient at low fire. For most wall hung boilers flue gas temperatures are typically between 2C and 12C higher than the return water temperatures depending on the current burner output. The return water plus burner output combination is a significant factor in determining the actual boiler efficiency achieved. The cooler the return water temperature, the more condensate is produced. Every US gallon of condensate produced is worth about 8095 Btus of energy. That is energy we can potentially put back into the heating system if condensing happens in contact with the boiler’s heat exchanger. Figure 4 shows flue gas condensation occurring on the heat exchanger used in a wall hung condensing boiler. 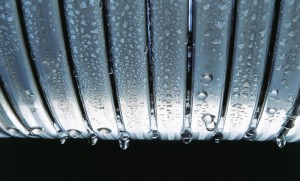 So, the goal is the lowest return water temperature possible, the lowest firing rate possible, and the largest Delta temperature between supply and return possible. Delta T is limited by design of the circulation system and the heat emitters and is a topic all its own. We will leave it with: doing the best you can to obtain a larger Delta T is better for efficiencies as far as achieving the dew point is concerned.

In terms of controlling the system, we need to take advantage of outdoor reset. That is the ability to reduce the system water temperatures automatically based on warmer outdoor temperatures. The result is that we essentially match the amount of heat we send into the building based on how fast it loses heat to the outside. As it gets colder outside the heat loss from inside to outside increases so we need to add more heat.

As of September 2012, Natural Resources Canada mandated under the Canadian Energy Efficiency Regulations, that reset controls must be supplied from the boiler manufacturer for most heating boilers up to 300 000 Btuh. The energy savings from outdoor reset can be determined by the three to one rule. For every three degrees we can lower the average system water temperature during the heating season, we will burn one per cent less fuel. That works for either condensing or non-condensing boilers. But as soon as we get the return water temperature below the dew point (approximately 55C), we can add the 8095 Btus/US gal. into the mix. Pretty simple right? The boiler has outdoor reset controls, we set it up for the type of system we have and the boiler condenses most of the time.

But we are talking about multiple boilers, so let’s see how that changes what we want to achieve. Assume we have two or more boilers, each with a modulating burner. They need to work as a team to meet the criteria above for water temperatures and firing rates. That works best is if they can communicate and know each other exists. The staging control strategy that will bring the next boiler on, based solely on the difference between the set point a
nd supply water temperature, will not allow the boilers to optimize the lowest firing rate.

Condensing boilers need a strategy that we might call gross calorific, as opposed to the staging strategy we want for non-condensing boilers which is net calorific. Figure 5 shows that boiler one must be under a heavy load before boiler two is brought on.

Figure 6 indicates the boiler’s load capacity does not need to be at 100 per cent output before it brings the next boiler on. The controls will base the demand for the next boiler partially on a value of time. The next boiler is brought on when there is a load present after the control’s integral time has completed its calculation. This allows two or more boilers to operate at a lower firing rate, optimizing their ability to stay within the condensing range. The cascade control looks at a common supply temperature at the primary/secondary junction to see how far from the set point the water temperature is, plus how much time has passed while it has been behind, and then it lets the boiler(s) know what to do. It works better if the staging (cascade) control knows the current modulation position of each boiler and the internal boiler supply temperature (this would obviously require two way communications between the boilers and the cascade).

So let’s recap. We want: enough boilers to span the peak and base load parameters without short cycling boilers; Outdoor reset set point controls; the lowest system design temperatures that can satisfy the type of system and the building load; and a “gross calorific” type multiple-boiler control that can intelligently stage the boilers while keeping them at the lowest possible firing rate.

There is no question that multi-boiler systems that are designed with all of these things in mind will improve the overall system efficiency.