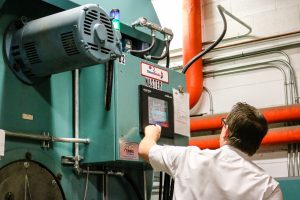 Instead of replacing the two nearly 30-year old boilers at First Canadian Centre in Calgary, GWL Realty Advisors chose to replace the burners with high-efficiency ones and upgrade the controls to a PLC-based system with oxygen trim and parallel positioning. Photo Tundra Process Solutions

As a result of the boiler retrofit, First Canadian Centre decreased its emissions from uncontrolled (130 ppm NOx) to low NOx (30 ppm) and reduced its fuel usage by 20 per cent. Photo Tundra Process Solutions

One-third of a facility’s energy bill stems from the boiler room, and system inefficiency just adds to high energy costs. If replacing a boiler is not an option due to budget constraints, retrofitting an old boiler is one way to bring it nearly up to par with today’s new systems.

THE CAUSE OF INEFFICIENCY

The main cause of energy inefficiency is system heat loss. The average level of efficiency for industrial boilers is only 75 per cent to 77 per cent. The first place to look for improvements is in the control system. The following control developments produce measurable efficiency increases and fuel-cost reductions and they are available for retrofitting into an existing system.

TAKE BACK THE HEAT

Another way to please budget scrutinizers while improving energy efficiency is by incorporating heat recovery retrofits into the boiler system.

Each on-off cycle is followed by purge cycles. During a purge cycle, large volumes of room air pass through boiler, resulting in heat being blown out the stack.