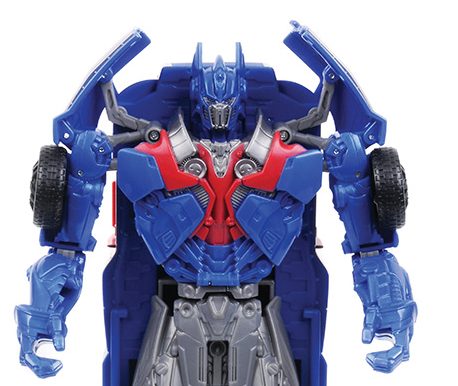 I really hope that the title of this article is not lost on readers. When I say the word transformer two things come to mind. The first is Autobots and Decepticons because I grew up in the 80s and the second is 24 volts in a boiler room. It is more pertinent to talk about the latter.

Transformers come in all shapes and sizes, and in all different voltages and current ratings. Are we supposed to say VA or power? There actually is a lot to transformers. I see why the cartoon’s title included “More than meets the eye.”

As I have mentioned in previous articles (online at www.hpacmag.com) I was not a total nerd growing up. I had the privilege of going to work with my dad who operated the Mica and Revelstoke Dams in British Columbia. I learned a lot about power from hanging out there–especially the old adage “big power, big problems!”

Needless to say the two-storey transformers at the dams were huge electrical devices. With any electrical device there are rare occasions where something goes wrong and it, well, blows up as was the case at Mica. Transformer malfunctions on this scale are not your typical puff of black magic smoke but a real explosion. A lot of stuff goes on when something that big happens at one of these plants and all the engineering in the world won’t make guarantee immunity from incidents.

On a smaller scale, consider those big grey canisters (as we always called them) on your telephone poles. These transformers change the very high voltage and low current into a very low voltage with a higher current. These are step down transformers.

The power on the power lines is at a very high voltage of around 25,000 volts AC. The reason for such high voltage is that there is less loss of power in the actual wire connecting the power plants to the cities. This is where the transformers come into play–we need something that turns that voltage into something our buildings can use; what devices such as computers, dishwashers and lights need.

We know that transformers change one voltage to another voltage, but how do they work?

The functioning of transformers is only available with alternating current; it does not happen with direct current. Why is that? Do you remember the experiment in elementary school when you wrapped the wire around the nail and tied it to a battery? What happened next?

You put the nail near some small metal filings and voila, you made a magnet. I loved this experiment. You made a magnet with a battery. How is that even possible? Physics is how. This same principle is how a transformer works.

A transformer works on a principle of magnetic flux. Magnetic flux happens when an AC current is put through a wire. Keep in mind that I will just use the term “current,” but remember when you have current you also have voltage.

Magnetic flux is invisible, which to me is mind blowing. All we did is put AC current through a wire and we created this whole other property, which you do not even know is there until you put another wire close to it. It then creates AC current in the wire that you are holding. I tend to nerd out on stuff like this but just think about this: it is the transfer of energy through the air.

In the case of a transformer, to make this transfer of energy more efficient they wrap wires around a metal core on both sides (although the position is not essential). The metal core comes in many different shapes, sizes and configurations but at the end of the day it is two sets of wires wrapped around some sort of metal as illustrated in Figure 1. 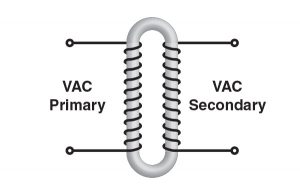 To understand the amount of energy transferred we need to understand a formula. As an “electronic guy” I use Formula 1 all the time.

In our industry P is also referred to as VA, which stands for Volt Amps. You can see that this is actually the same as Power by the formula. I won’t get into the why we use VA and not power because that gets into reactive, resistive and phases and peaks. But just know “basically” VA is equal to power in this case.

Using this formula we can easily figure out a few things about transformers. If we know a transformer is a 40VA at 24VAC we can figure out how much current consumption we use on the 120VAC side of the transformer.

Using this same thinking on the primary side (120VAC side) 40VA = I x 120VAC, which equals 0.333A. You can see we only need 0.33A @ 120VAC on the primary side to create 1.667A @24VAC on the secondary side. Once again this transformer is a step down configuration. We go from 120VAC to 24VAC, which is a 5:1 ratio on the transformer windings. By adjusting the number of turns on the primary versus the secondary we can create different voltages and different current outputs BUT you are ALWAYS limited by P = IV. We cannot outdo physics. 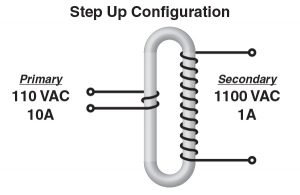 If we only have 40VA to work with then we cannot have more on the input than on the output. This same principle also works the other direction. If you put 24VAC with 1.667A on the secondary side you

will have 120VAC with 0.33A on the primary side (this is assuming it is the same transformer). You are essentially swapping the primary and secondary side (see Figure 2).

IN THE REAL WORLD 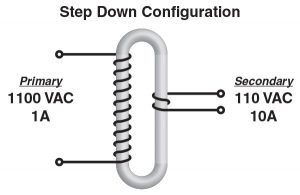 We see 24VAC transformers all around the mechanical room. They are used to run thermostats, humidifiers, zone valves, demand signals for boilers, furnaces and many other units in the mechanical room. They are everywhere. As noted in the first article in this series (see HPAC March 2018, Who Let the Smoke Out) 24VAC is much safer to handle than 120VAC.
If you touch 24VAC with your bare hands you won’t get shocked, it is possible if your hands were wet but it is very hard for 24VAC to travel through skin because it is a low voltage. This is the reason we step it down to be a workable voltage.

What about wiring one of these transformers in the mechanical room? When you get a transformer 24VAC 40VA from the wholesaler it has three wires on the primary side: line, neutral and ground but you only have two wires on the secondary (24VAC) side. So where is the ground?
Transformers work a little differently. If you measure from one wire to the other on the secondary side you get 24VAC, but if you measure from one wire to a copper pipe (ground) you will only see 12VAC.

Generally, and I do say generally since this does depend on the jurisdiction, you need to ground one of the secondary transformer wires. What this does is it forces the transformer to be referenced to ground.

If you measure the wire that is not grounded, to ground you will find the full 24VAC is on one wire. This also gives an electrical path to ground, which is always a good thing. If something goes wrong the shorted path is to ground, essentially failing safe. Normally controls and boilers and such can take the 24VAC either way, but it is always good practice to have a ground.

I know it may seem a little daunting and it is “just” a transformer but remember transformers make current out of thin air! There is more complex information we could have gotten into but as promised we laid low on the physics.
Electricity is fun and it is everywhere but when it decides to go against you, well, you know what happens. Be safe, learn about it and do not take it for granted because you literally only have milliseconds before it starts to hurt. <>