In North America the dissolved mineral content from municipal water sources and private wells is often limited to hardness – the primary ingredient in limescale. Other potentially harmful minerals are held in check by safe drinking water regulation and oversight in the case of municipal water, and the absence of contaminant sources such as agricultural runoff or de-icing salts in the case of private wells.
Though people often associate problematic hard water with only well water sources, municipal water can be problematic too. For example, about half of all water sources in the U.S. have hardness levels of seven grains or more. Such values can be unhealthy for hydronic systems.
SCALE FORMATION
Let’s start with an explanation of scale formation.
As the earth’s water evaporates it is essentially pure. The vapour rises, cools, condenses back to liquid then falls back to earth. As it seeps through the earth’s crust on its way to aquifers, or passes through rivers and lakes, the water dissolves minerals forming electrically charged atoms called ions.
For example, calcite is a common type of rock containing the mineral calcium carbonate Ca(CO3). In the presence of water and carbon dioxide, calcium carbonate dissolves to form the positively-charged ion (e.g., cation) calcium Ca2+, and negatively-charged ions (e.g., anions) carbonate CO32- and bicarbonate HCO3-. Similar reactions take place with other minerals forming cations such as Mg2+, Fe2+, Mn2+ and Zn2+. Water containing significant concentration of these “divalent“ cations is hard. If you try to lather up in the shower with such water, suds won’t form easily. You can think of the suds as being “hard“ to form.
However, the Ca2+ and Mg2+ cations possess a unique and problematic characteristic. As temperature increases they become less soluble and can react with bicarbonate to form solids. In heating systems, this reaction occurs on any surface at sufficiently high temperature. The solid that forms from the Ca2+ reaction is calcium carbonate. The solid formed by the Mg2+ reaction is magnesium carbonate. These solids are limescale.
As the system cools the reactions do not reverse themselves. The scale remains bonded to the surfaces unless conditions change, such as when the scale is exposed to an acid cleaning solution, or is broken loose from the surface by expansion and contraction movement.
The problems limescale formation can cause are:

Each of these will be discussed along with prevention strategies. 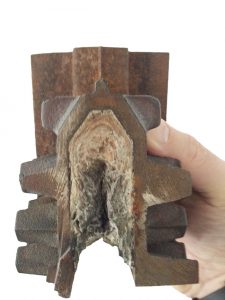 1. REDUCED BOILER EFFICIENCY
Figure 1 shows a heat exchanger cutaway from a cast iron boiler that failed from limescale. The thickness is extreme indicating the system had very high water volume relative to the size of the boiler’s heat exchanger, or the system required an excessive amount of untreated make-up water over the boiler‘s life.

By the time the boiler failed its efficiency was severely reduced. Even if the scale build-up was a fraction of that shown, the boiler’s efficiency would have been significantly impacted.
Figure 2 is a graph showing heat transfer penalty as a function of scale thickness. A thickness of just 1 mm can cause a 10 per cent loss in efficiency. A boiler rated to deliver 1 million Btu/hr would essentially be delivering 900,000 Btu/hr. That is a lot of wasted energy up the flue.

2. STRESS FATIGUE
Figure 3 shows a heat exchanger cutaway from a condensing boiler that failed due to leaking. This is a popular stainless steel “fire tube” heat exchanger design used by several manufacturers. Combustion gases travel down the tubes as water travels upward outside the tubes absorbing heat. The scale formation is thickest where the surface temperature is highest – in this case where the flame bowl joins the tubes.
The higher the wall temperature the faster and thicker the scale forms. Because scale acts as an insulator, the varying scale thicknesses and thus wall temperatures create non-uniform mechanical stresses across the heat exchanger. The cyclical heating and cooling can lead to accelerated stress fatigue and ultimately cracking – as was the case here.

3. INCREASED FLOW RESISTANCE
As scale forms and passages through the boiler’s heat exchanger become narrower, flow resistance increases. If the boiler has a fixed speed circulator the boiler’s flow rate will decrease. This can create problems such as steam flashing. Repeated steam formation and contraction cycling not only make for a very noisy boiler, but also exacerbate the stress fatiguing problem. 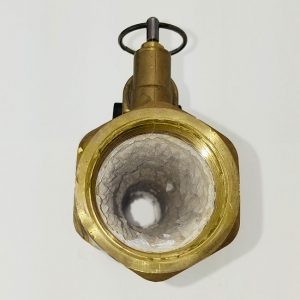 If the boiler circulator is variable speed and configured to maintain a fixed flow rate, the electrical power demand of the circulator will increase due to the increased flow resistance. This increases the system operating cost.
Scale may form in areas other than where wall temperature is highest. If water leaving the boiler is sufficiently hot, scale can form on other components. Figure 4 shows a balancing valve with scaling that closed the passage by over 50 per cent.

It is for this reason manufacturers of precision hydronic components that are installed close to a heat source, and that incorporate moving parts, use materials that resist scale formation. 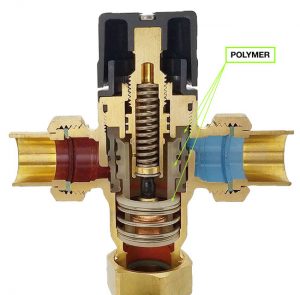 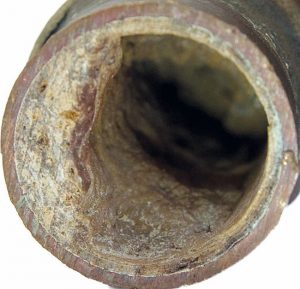 HARDNESS CONCENTRATION LEVELS
There are various ways of measuring hardness concentration. Test strips provide an inexpensive method. Although they do not provide precise values, they offer good indication. For more accuracy, hardness titration kits are useful and can be attained for less than $100.
Most boiler manufacturers publish limits for various water contaminants in their installation and operation manuals. Water hardness limits are typically between three and seven grains. To get a sense of how much hardness this represents, consider a standard 325 mg aspirin tablet. 65 milligrams equates to one grain. So one aspirin tablet dissolved in a gallon of water is equivalent to five grains of hardness.
A complicating factor in determining the acceptable hardness level for a particular system is water volume. This is because over time, unless pH and alkalinity levels are kept suppressed, almost all the hardness will precipitate out. And the scale will mostly form on the hottest surfaces – those within the boiler’s heat exchanger. Consider an infloor radiant heating system with 25 gallons of water having five grains hardness. Most of the scale that eventually forms will likely bond to the boiler’s heat exchanger. That would be equivalent to 25 aspirin tablets.
Depending on the size of the boiler’s heat exchanger this could be a problem – especially if the scale formed non-uniformly. Next consider what happens if you add a 25 gallon buffer tank to the system to reduce cycling. The effect could be 50 aspirins worth of scale bonded to the heat exchanger, not only defeating the intent of the buffer tank but risking early stress fatigue failure.
The German water quality standard VDI 2035 Part 1 takes water volume into consideration. If the ratio of water volume (in litres) to the boiler capacity rating (in kW) exceeds 20, the water should be treated – even if its hardness was otherwise deemed acceptable. Using an english units example, for every 10,000 btu/hr of rated boiler capacity, the volume of untreated water used shouldn‘t exceed 15 ½ gallons. For multiple boiler systems the boiler capacity rating referred to in this standard is that of the smallest boiler. Presumably this worse case scenario recognizes that one boiler often provides a high percentage of the seasonal heating requirement, and thus is more subject to scaling in comparison to boilers that only operate during peak loads. 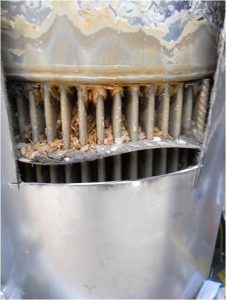 IMPORTANCE OF MAKE-UP
The water volume cited in the above mentioned VDI standard is the total water the system experiences over its life – the initial fill plus the expected makeup water required. The fill water used in the system of the failed boiler of Figure 3 had a hardness of only seven grains, however, there was significant make-up volume.

TREATMENT STRATEGIES
Effective common treatments for excessively hard water fall into three categories.
The first category is chemical additives. There are many chemical additives available. Some target hardness by sequestering the calcium and magnesium – keeping it in suspension and thus not allowing it to precipitate onto surfaces.
Care should be taken to minimize sludge formation when using certain sequestering chemicals, such as those that are phosphate based. Other chemicals are designed to perform multiple functions such as hardness sequestering and corrosion inhibition.
Care is required because certain contaminants such as chlorides and sulfates, or large make-up volume, can reduce effectiveness. Chemical treatments should always be routinely monitored. It is best to consult the manufacturer or a treatment expert if not experienced in using additives.
The second category is water softening. As discussed in Part I, because calcium and magnesium is removed and sodium added, the water’s electrical conductivity often rises. This creates conditions favourable for corrosion – especially if air management is sub-optimal. Furthermore, sodium hydroxide can form as aqueous carbon dioxide comes out of solution and vents off. This raises the pH level.
For most metals this is not problematic, but for aluminum it can be if the pH rises above 8.5 – the point above which aluminum can begin corroding, even with little dissolved oxygen.
The third category is demineralization. This is considered the ultimate solution because in addition to removing hardness, demineralizing removes all dissolved minerals, making the water non-conductive and the system resistant to corrosion.
The most cost effective method to demineralize water is by ion exchange using mixed bed resin. There are several North American manufacturers now offering products for this type of demineralizing. As is true with chemical treatment, demineralized water is subject to dilution if the system requires significant make-up. 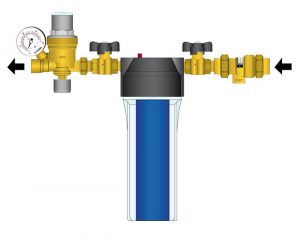 For this reason a make-up water treatment assembly such as the one shown in Figure 6 can be used. It includes a small replaceable canister containing demineralizing resin beads. Make-up water is automatically demineralized as it flows into the system.

SUMMARY
Most of the water from North America sources contain hardness. And because hardness can rapidly lead to limescale formation as well as promote corrosion, it is perhaps the most frequently encountered hydronic water quality problem – especially in areas with insignificant levels of other contaminants. Being aware of hardness’ role in forming scale, understanding the effect of scale in different applications, and knowing the various treatment solutions available, are key tools for designer and contractor alike to ensure their systems operate efficiently and reliably. 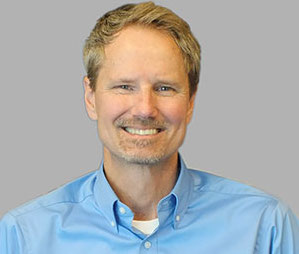