The design of the new headquarters for the Toronto and Region Conservation Authority will showcase its mechanical system. 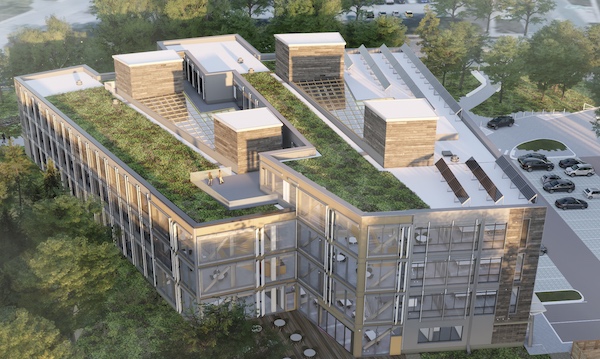 Managing and protecting natural water systems in and around the city of Toronto is the mandate of the Toronto and Region Conservation Authority (TRCA), so it’s no surprise the design of the organization’s new headquarters incorporates water in many ways including, of course, its mechanical systems.

Being built near the Black Creek ravine in Toronto’s north end, the $65 million project (with support through NRCan’s GCWood Program) broke ground in January of 2020 with occupancy slated for September 2022. The new light-filled open-plan four-storey office building covers some 90,000 sq. ft. (8,100 m2) and will be a unique mass timber structure.

ZAS Architects of Toronto in a joint venture with Irish-based Bucholz McEvoy Architects designed the TRCA headquarters to be one of the most energy efficient mid-rise commercial buildings in North America. “We envisioned TRCA’s new workplace as one that will inspire, motivate and support the culture of its employees, who are champions of the local environment,” says Peter Duckworth Pilkington, principal with ZAS Architects. In addition to the use of wood, other sustainable design features include an energy efficient building envelope, a green roof, rainwater harvesting, low impact landscape development, and solar chimneys which increase efficiency by heating ventilation air.

“Overall, this building is tracking to be among the most energy efficient buildings in the country, somewhere around 54 ekWh/m² [equivalent kilowatt hours per meter-squared],” notes Duckworth Pilkington. When compared to traditional office buildings of this size, carbon emissions along with operating costs are projected to be reduced by up to 50%. 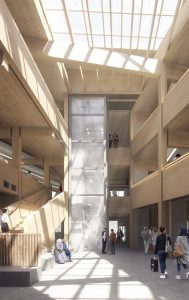 A main feature will be four water walls in the main atrium—each water wall is actually a glass enclosure (like a duct) in which the ventilation air is pulled down from the outdoor intake at the roof level and distributed to energy recovery ventilators (ERVs). Inside each of the glass ducts a chain-link mesh is suspended the full height and water cascades down—providing a visual display and playing a role in pre-heating and humidification of the dedicated outdoor air HVAC system.

“Through the water wall feature, we’re making the building’s life support systems that are usually hidden infrastructure visible and tangible,” says Duckworth Pilkington. “Making the invisible visible when it comes to energy use, serves as a very real reminder of the impact our daily lives and decisions have on the planet every day.”

The windows on the southern façade feature operable exterior shading, and a secondary skin in front of the shading allows for pre-heating of the air before entering the building in cooler months.

A lot of the building’s control strategy is designed to optimize passive heating, cooling and ventilation opportunities. For example, the building management system will alert occupants on their phone via an app to either open or close windows to ensure the building is using energy most efficiently.

The central mechanical room in the basement was originally planned as a closed-loop geothermal system, but after ground water was found on the site a redesign led to an open-loop geothermal solution. So instead of drilling some 44 boreholes, now there will be four boreholes. “The open-loop geothermal is an opportunity the client didn’t want to miss out on, because they are experts in water flow, conservation and protection their staff was able identify an underground bedrock valley in which underground aquifer sits” says Jamie Dabner, principal with Integral Group, the mechanical engineers on the project.

The four-pipe radiant system is connected to a dedicated 120 ton heat recovery chiller (heat pump) made up of three 40 ton modules to allow for simultaneous heating and chilled water production delivery to the building distribution system.

The buffer tank for the dedicated heat recovery chiller is 750 gallons and there are two 750 gallon buffer tanks for the solar thermal system.

“We actually have it piped up to be available for free heating, so there are times in the shoulder seasons when we might not want to run the compressors, and we’re just going to run the building on solar thermal only,” explains Dabner.

In case of extreme temperatures or maintenance, the building does have a pair of electric boilers as a back up system since the project is a Zero Carbon design.

Because the preference was to expose the wood on the interior and not hide it with drop ceilings, there is an air distribution plenum system, about 14-in. deep, across the top of each cross laminated timber (CLT) floor slab on every storey with supply air diffusers.

The plenum is used for ventilation only, and separate from that is the four-pipe radiant system with six-way valves feeding water-based ceiling panels used for both heating and cooling.

The piping network runs in the plenum, and the pipes poke down to the modular radiant ceiling panels which are hung on the underside of the CLT flooring.

To accommodate cooling with the ceiling panels, considering Toronto’s summertime humidity, there will be dew point sensors in the thermostats in each of the zones, and if somebody opens a window raising the humidity indoors, the zone will turn off.

There are also ceiling fans, and according to Dabner the fans can increase the capacity of the radiant panels by up to about 10% in cooling mode.

He points out that a well thought-out four-pipe system is really the future of Net Zero carbon design.

Once completed, the new TRCA headquarters will be used as a learning centre–a living laboratory for developers, researchers and students–to demonstrate zero carbon features. <>