Wi-Fi networks are getting stronger because the devices are working together to deliver the messages.

Getting your wireless signal to make it to its final destination is getting easier every day. Mesh networks are all the rage, you hear it almost as a term that people drop to sound cool.

“Oh you are having Wi-Fi- issues? Have you heard of mesh networks?” It’s funny for me because most of my friends and family don’t really know what I do, and I sort of like it that way. They know I do “technical stuff” so I can dazzle them with these little tidbits of technical jargon. 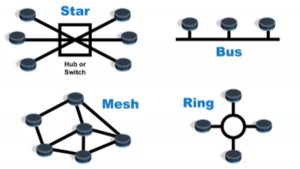 Networks have been designed for a long time now. There are also many different kinds of networks. The reason for any network is to connect devices. This may be a computer, IoT devices, cars or anything that we would like “connected” together.

The dictionary says a network is “a group or system of interconnected people or things.” We use the word network for many different things. We even refer to it when we are “networking,” which basically means meeting people and introducing yourself—30 years ago this was simply the meaning of being polite.

Anyways, we use networks to extend the capabilities of single devices. Think of it like this, your computer (or whatever device we are talking about) is a car. If we only had one road that went from your house to your mom’s house, you could only ever visit your mom. But if we had a network of roads you could go anywhere you needed to.

Now I know that is a little over simplified, but that is the basis of a network. A network extends our capabilities beyond just a simple back and forth one direction of data flow.

Ok, funny story time. And yes it’s about me being electrocuted. It has to do with “extending my capabilities.” So in the early 1990’s cordless phones were just getting big. I bought one with my own money in grade 12, but the signal strength back then on these phones was not near as good as they are now. At the time, my girlfriend (now my wife) and myself would talk for hours. The problem was I had to be within the range of the base to get the phone to work properly.

The base was upstairs, and my room was downstairs. This created a problem for me eventually. So me being the super bright do-it-your-selfer, I decided to put the base in my room. There was only one issue. I did not have a phone jack to plug it into. So I needed to extend the wires from the phone jack in my brother’s old room, to mine. Should be simple I thought, get some phone wire from somewhere and extend it under the stairs and, voila.

Well I was cutting a few corners, and one of them was to not use wire strippers. Phone lines work off a weird voltage, 48VDC, which normally is not an issue, but if you are stripping both the wires with your teeth it is!

It was a really good one, the shock I mean, because apparently saliva is a good conductor! You think sticking your tongue on a 9V battery hurts. So lesson learned that day.

There are a few different types of communication networks, but I want to focus on the one that literally is building our world as we know it. The mesh network. A mesh network works by allowing each device to independently repeat the information it receives to other devices in the network.

Why this is important is that network devices are not always at even spacing, especially wireless devices, and the communication from one device to another may stop because it cannot reach. In the case of a mesh network the information can get routed though many devices, not in a “straight line,” until it finally gets to the intended device.

If it was just me and the person at the back of the room in the room, I could never have gotten the note to him. But because the room was filled with other people, they helped get the message delivered. This is why mesh networks are so powerful and very handy.

I started using mesh networks about 15 years ago with the onset of ZigBee, one of the first protocols to use mesh networking. It has the ability to route information to get the data to the intended “node.” A node is just a device in the network. Back then mesh was a very powerful tool. Wireless was just starting to take off, and Wi-Fi was not being used in this way.

But this type of network always created an issue. You needed two different protocols to get the information into the hands of the user. The ZigBee, or other mesh networks, would gather the information from the environment using arrays or devices, for example they could be collecting temperatures from all over a building. All of these temperatures would travel to some central location to then get changed into an “Internet” protocol. This means the information would have to be reformatted so it could be put out on the web, or transferred between computers or over Wi-Fi. Here-in lies the problem, we are collecting the data with one protocol, but transmitting it to the world with another.

Is there something that can solve this? Yes of course there is. The Wi-Fi mesh network.

Wi-Fi mesh networks are going to change the way we gather data. Now we don’t need any central gathering station to reformat information. We can go straight from the device out to the world. This is done by not having the end devices creating the mesh network, but creating a mesh network “around” the devices.

This way the end devices, in our case the temperature sensors, don’t talk with each other but they communicate directly with the Wi-Fi network. But the temperature sensors don’t have to always talk to the same Wi-Fi device. It’s the same premise as the note passing in the room. The Wi-Fi mesh network will decide how to get the info delivered most efficiently.

With the onset of IoT the Wi-Fi mesh becomes pivotal to retrieving and pushing information out to the world. There are going to be so many devices in your house or building that we will need to make sure the delivery is as efficient as possible.

This also helps developers, as now they don’t have to deal with more than one protocol. You have probably seen Wi-Fi extenders in your house our office, and that was the start, but now with mesh networking the possibilities for information gathering is huge.

Mesh networks are, in a couple words, “very cool.” So now you can drop that word around to your friends and family and actually know what it means