What’s new with HRVs and ERVs? 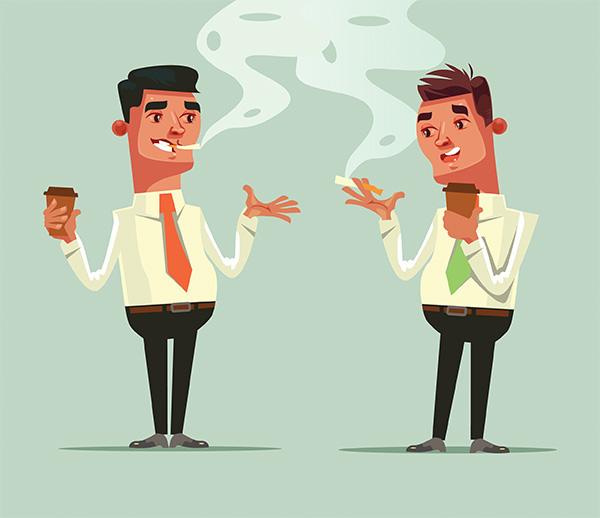 The difference in cooling load just for the ventilation air is over four tons in deference to the smokers.

In the fall of 1992, a self-employed colleague of mine rented a single family, two-story, detached house in Scarborough. He had been victimized by the severe recession wrought, in part, by the collapse of the Canadian housing market bubble in 1989.

Selling off his then over-mortgaged family home, he decided to rent for a while licking his financial wounds and hoping for better days ahead. As if to add insult to injury, this dedicated revenue property built in the early 1980s, exhibited at every turn the slapped-together shoddy workmanship mentality of some homebuilders. The profusion of poor quality materials throughout the house made for a Halloween-like disguise of a real residential building.

I visited one cold winter’s day trying to help him find a way to get some heat delivered to the living room, which was almost entirely over the inadequately insulated garage. Short of tearing down the garage ceiling and re-doing everything it was not happening. The only answer to providing more heat in the living room turned out to be a quick trip to a local store for a 1500 watt plug-in baseboard heater.

He had already anchored plastic sheeting to the entire sliding door and nearby smaller window frames (both facing north-west) trying to stymie the persistent infiltration of freezing cold air into the room. As the wind blew, the plastic barrier would bulge into the room several inches, as if to further demonstrate Mother Nature’s scorn for the feckless builder.

Ventilation must be provided for residential and commercial buildings all year. Human occupancy reduces the amount of available oxygen, increases CO2 and moisture levels, in combination with ever present odours, making the indoor air not only uncomfortably stale, but unhealthy too. At one time, providing ventilation air seemed to be a fairly quaint practice, even a second thought, for residential buildings.

From an old HVAC textbook in my library dated 1965: “Fortunately, sufficient ventilation is usually obtained in most residences by infiltration around doors and windows. If infiltration does not provide adequate ventilation, the homeowner may turn on bath or kitchen exhaust fans or may open a window slightly.”

Curiously, a study of houses built in the late 1980s showed houses were more airtight than previously thought; in fact, a great majority of them had a Heating Season Natural Air Leakage Rate of less than 0.3 air changes per hour. That study missed my friend’s rented house. Just from ill-fitting windows and doors alone, I am sure he had the equivalent of one sizeable window open all the time.

Chronic airtightness means the indoor environment can be, at least, very unhealthy and, at worst, dangerous due spillage susceptible appliances searching for air to burn. Combustion air, too long gobbling up ventilation and infiltration air (to dangerous levels in some residential buildings tightened up in a willy-nilly fashion), should no longer be necessary.

Direct vent fossil fuel furnaces, even though they may be approved to use indoor air for combustion, should be taking combustion air from outdoors. What about domestic hot water? There are plenty of options there: tankless water heaters, heat pump water heaters, desuperheater water heaters, solar tube and even electric water heaters, all help to eliminate the use of air exhausting appliances wherever possible.

I enjoyed watching the recent TV series called Mad Men chronicling the adventures of Madison Avenue advertising copywriters during the 1960s. To add to the realism, many characters smoked cigarettes. I wonder if those actors really smoke like that off the set.

I remember doing some cooling load calculations for commercial buildings in which the outdoor air requirements had a separate table for smoking in various applications. For example, in a Mad Men style general office where the average amount of smoking might be rated as “some” on my old chart, the recommended volume of ventilation air per person was 15 cfm. No smoking, in the same application, was 10 cfm per person.

If the office had 200 occupants and the conditions were to be maintained at 78F DB and 65F WB (95F DB and 78F WB outdoor), the difference in cooling load just for the ventilation air is over four tons in deference to the smokers. Smoking in the age of “More Doctors Smoke Camels Than Any Other Cigarette” seemed harmless (although annoying to many), except that mechanical cooling systems necessarily used considerably more energy than if the practice had been banned from day one.

The Province of Ontario, under the Smoke Free Ontario Act, only banned smoking in public spaces and workspaces in 2006. Decades of HVAC systems working overtime helped to usher in today’s energy crunch, ventilation air notwithstanding.

Homeowners have been replacing windows, doors, insulating attics, sealing holes, buying efficient furnaces and other efficient appliances for 30 years or more. Several times, various levels of governments and equipment manufacturers have offered incentives to encourage energy efficient retrofits that, without a doubt, helped many consumers. However, too many times an unfocused approach allowed some houses to become dangerously depressurized because the issue of providing adequate combustion air for fossil fueled appliances had not been addressed. And, HRVs and ERVs are not meant to provide make-up or combustion air.

Tightened-up houses then became warehouses of VOCs, fire retardants, sometimes radon gas, cooking odours and other chemicals that built-up over time. Mechanical ventilation must be used to control the source of such contaminants.

The general principle of both HRVs and ERVs is to provide an appropriate amount of (supposedly) fresh outdoor air into the home while exhausting stale, contaminated air outdoors. The two airstreams cross, without mixing, in a specialized heat exchanger with the outgoing air imparting much of its heat to the incoming colder air.

However, ERVs have the ability to transfer sensible and latent energy from the air making them more suitable for houses that need humidification in the winter and cooling in the summer. An HRV is a must in very tight construction (0.6 ACH or lower); not an ERV as it would tend to keep humidity levels higher than desired in a very tight house.

Most of the manufacturers listed in the HVI catalog offer both types of units. Minimizing energy consumption is today’s priority for HVAC systems, as such designers should consider using only HVI certified and ENERGY STAR rated products going forward.

HVAC equipment, not unlike all other consumer products, improves as technology advances over time. In the recent past, some ERVs suffered core failures caused by operation in freezing temperatures. Now, cold climate ERVs are commonplace. Manufacturers have concentrated on improving all aspects of mechanical ventilation products:

Almost every manufacturer offers units that meet Canada’s ENERGY STAR performance criteria including efficient use of electricity and SREs of at least 60 per cent at -13F (-25C). Incredible.

The most efficient units typically utilize a pair of brushless DC motors such as the German-made ebm-pabst centrifugal fans with backward curved blades. The motor takes AC current delivers it to an on-board integrated electronic controller, and voila: A DC brushless drive that is 30 per cent more efficient than an AC motor. It also offers quieter operation.

Efficient passive defrost: the discharge motor shuts down, a damper closes and indoor air is recirculated through the core quickly eliminating ice buildup in the core.

Smarter controls are available that can automatically adjust the ventilation based on indoor humidity level versus outdoor temperature. Premium controllers feature LCD touch screen functionality and, in some instances, pair wirelessly to remote electronic timers installed in bathrooms.

Better outdoor terminations. Some manufacturers now offer concentric terminations that may be used in appropriate situations.

Core air filters are typically easily maintained; the core itself can be removed for cleaning, in most cases, without the need of tools.

Like the preponderance of fossil-fuel heating appliances tucked into millions of residential applications over many decades past, mechanical ventilation similarly will become a permanent feature of all newly constructed tighter houses. Under the provisions of the 2017 Ontario Building Code (OBC), newly constructed houses will use half the energy of those built in 2005.

My concern extends to all those existing homes (close to five million residential buildings in Ontario alone) that have not had the full benefit of the latest technology.

In a recent issue of the Ontario Homebuilder Magazine, Doug Tarry, director of marketing and lead designer for Doug Tarry Homes said, “Existing homes, which make up 99 per cent of the housing stock, are a far greater problem. Go back and make all those existing homes 20 per cent to 25 per cent more efficient from where their baseline is right now and you’ll move the meter way further than if you go after the one per cent of new homes that get five per cent or 15 per cent better.”

The government of Ontario released the details of its Climate Change Action Plan in June of 2016. Cap and trade penalties levied against large commercial polluters are expected to pay for some $8.3 billion in spending in an attempt to help individuals, corporations and municipalities to reduce their “carbon footprint” over the next five years.

I asked a local contractor to give me a price for adding continuous insulation to the exterior of my house, and the price is jaw dropping. I updated my house (built in 2005) with a modulating LP furnace, LED lighting and a complete HRV re-do as the original unit was not installed properly nor ever maintained. Now the dodgy windows are starting to fail. Incentives aside, perpetual building maintenance is a costly venture.

In any event, nothing lasts forever; all buildings will eventually require system renovations. Today, with government incentives included, the least expensive way to improving the so called carbon footprint of existing housing continues to be a mechanical one.

I used Google Earth Street View to find my friend’s old address in Scarborough (he is long gone from there). The house has had all the front-facing doors and windows, including the garage door, replaced at some point. I am thinking it needs a cold climate ERV now too.