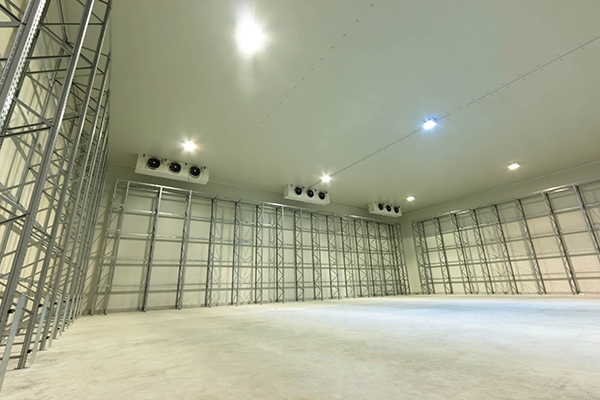 Progress in most industries results from new ideas being provided with sufficient capital to undergo the necessary research and development to ultimately become a reality in the marketplace.

Every year, manufacturers present their current offering of the latest and greatest products to the marketplace, and every now and then some technologies knock it out of the park.

In this article I’m going to discuss a couple new solutions that have been game changers in recent years.

Well, of course I wouldn’t be asking the question if an awesome answer couldn’t be provided. Let me cover two smart technology options that are currently available for the refrigeration sector that can help.

Condenser capacity is based on several factors: physical size of the condenser fin/tube bundle, fin spacing, air flow provided by the condenser fan motors, and the thermodynamic properties of the refrigerant flowing through the condenser.

This is good, but only to a certain point. The lower condensing pressure resulting from milder ambient conditions allows for a more efficient compressor operation. This yields a greater compressor capacity, which can reduce compressor run time, or allow for cycling a compressor off in a multi-compressor application.

As with some good things, too much of a good thing becomes a bad thing. The lynch pin with an oversized condenser is how the reduced condensing pressure (which results in a lower liquid pressure) can negatively affect the TEV capacity.

TEV capacity is based on three system parameters: (1) evaporator SST, (2) liquid temp. entering the TEV, and (3) pressure drop across the TEV port.

This is accomplished by allowing liquid refrigerant to back up into the condenser (flooding the condenser), which then reduces the size of the condenser. While the operation of these valves merits a lengthy discussion of its own (which is not the point of this article), suffice it to say that the result of condenser flooding valves is a minimum head pressure which the system will never operate below.

While this method of head pressure control provides very consistent head pressure during low ambient conditions, it requires: (1) determining (and adding) the extra refrigerant charge the system needs to properly flood the condenser at the lowest ambient temperature expected, while still maintaining a liquid seal in the receiver, and (2) the obvious extra expense of refrigerant. 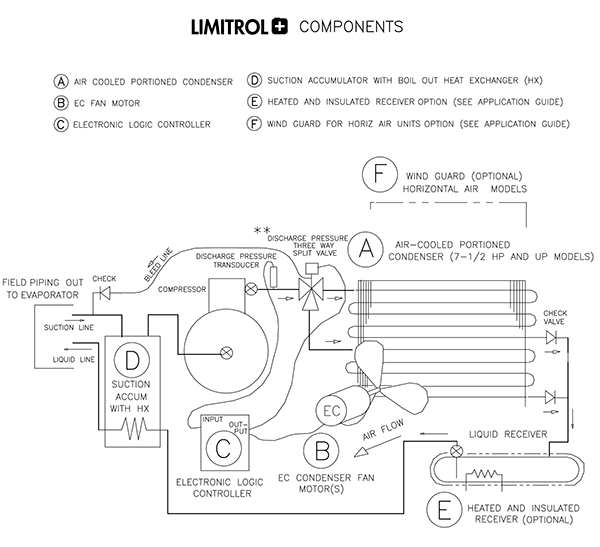 A piping schematic of LIMITROL+ and components.

In addition, given that every single system will develop a refrigerant leak at some point in its life span, the resulting recharge after the leak repair will be costlier. And then there is the extra refrigerant that will enter the atmosphere and the environmental impact.

The condenser split eliminates the need for flooding valves (down to ambient temperature of -20F), reducing refrigerant charge. The EC motors maintain precise head pressure during conditions below the design condition, and reduce electrical consumption over standard motors.

As I have written about previously, the real beauty of electronic control is its ability to provide precise and repeatable results. Nowhere is this more apparent than in the ability of an electronically controlled step motor electric expansion valve (EEV) to maintain precise superheat control. 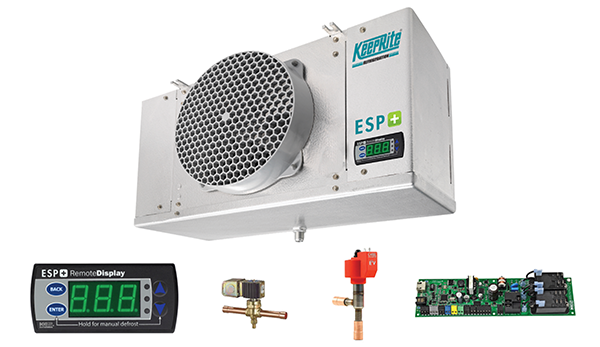 As great as this benefit is, this is only one of many unique features offered with the ESP+ evaporator control technology. The Adaptive Defrost Controller eliminates the need for a mechanical thermostat and defrost time clock, and controls all aspects of the evaporator operation, including the following:

Simplicity is always sought after, but it’s rare that simplicity results in state of the art. Both of these award-winning solutions combine both. The benefit to the refrigeration installer and service technician is a time saving installation, simple setup and adjustment, and troubleshooting aided by remote monitoring and performance history.

The end user will realize greater efficiency, greater stored product integrity from precise temperature control, and the peace of mind knowing that any system malfunction is an email or text message away.

Who can argue that?