How to heat and cool a very large, nearly all-glass building, while hiding the sources of warmth and cooling.

As a significant public building, the Winnipeg James Armstrong Richardson International Airport has large expanses of heated and cooled floors as part of its LEED Silver Certified approach to heating and cooling system efficiency. From the onset of the project, the vision for the terminal building was of a clean, modern architecture incorporating thematic aspects of the Manitoba prairie.

Of importance was a strong directive to minimize–if not make invisible–all of the normally-seen mechanical systems and to keep the building as transparent as possible. Tall spans of exterior curtain wall were designed to merge with the ceiling and disappear into the floor without visual clutter. The challenge placed before the mechanical design team was how to heat and cool a very large, nearly all-glass building, while hiding the sources of warmth and cooling. 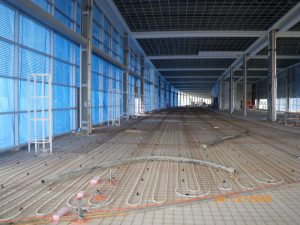 The optimal heated floor zone placement was within a 25-foot deep band from the foot of the curtain wall.

An in-floor heating and cooling system became the obvious solution, but presented a significant technical challenge. Of primary importance was a discussion with the architectural designers on the quality of the curtain walls.

Triple pane window units were considered at first, but upon further investigation, it was concluded that comparable thermal performance of the glazing system could be achieved with dual pane units and a higher quality curtain wall system. Once the thermal performance was established, heat loss and gain calculations were performed to establish heating and cooling requirements for the spaces. As expected due to the large expanses of glass, it was verified that the heating requirements would be significant and that a heated floor system would require some substantial output. It was also verified that the summertime solar loads would also be considerable and would push the project towards a large cooling component.

The designers then realized that a large floor surface area with the capability of heating or cooling the areas in question could be a major benefit to the project. Radiant floor systems use relatively low temperature heat sources, typically limited to 140F/60C due to the potential of concrete failure when exposed to higher temperatures on a continual basis. This results in a large area of floor being required to generate sufficient heat to effectively temper a space.

In the summer, when the sun’s rays impact the interior of the building, this same large floor area can be used to absorb the solar gain directly by circulating cold water through the same pipe that carried warm water during the winter. The solar gain can be captured directly rather than allowing it to heat the ambient air in the space, where the only effective means of then cooling the air is with cold water coils at the air handlers. The result: smaller heating and cooling air handling equipment as a result of the use of active floors.

The designers then analyzed the placement of the floor areas in cooling mode. To accomplish this, solar angles were reviewed through all 8760 hours of the year to determine where sunlight would fall on the floors. From this exercise, optimal floor zones for solar load capture were determined and then compared with the optimal heating zones. The final active floor zones (combined seasonal heating and cooling) were determined through an optimization exercise where areas and placement were considered to determine the best active zone for both purposes.

As the architectural and interior design process continued, it was decided that floor finishes would include tiles and carpeting. Some in-depth research into the thermal properties of the floor finishes was required as any material beyond the base concrete floor introduces an insulating factor to the effective transfer of energy from the floor in heating mode or into the floor for cooling. To overcome this effect, the floors would require more power to push or pull energy through the floor covers.

Through thermal analysis, it was calculated that on the coldest of days the floors could be operated at 120F (50C) without negatively impacting the occupied spaces. In areas with less insulating flooring material the floors would be operated at 100F (38C). In cooling mode, chilled water as cold as 44F (7C) was available from the central chiller plant and would be adequate for the cooling task. In both cases, sufficient power (through temperature and flow rate optimization) was provided by design to make the active floor systems viable for the project.

Control of the floors is by means of a series of three temperature sensors embedded into the heated floor zone. The quantity of sensors was increased to provide redundancy and sufficient distribution of data gathering to ensure accurate measurement and control of the floor slab temperature. In the cooling mode, a local humidity sensor additionally measures relative humidity in the space containing the floor and the control sequence calculates the dew point. The floor slab is then maintained at a temperature above dewpoint to prevent condensation on the floors, which could cause slip hazards or damage the carpets.

The result of the implementation of active floors at the Winnipeg Airport is an evenly warm and comfortable space in the wintertime. The occupied space is kept at a space temperature slightly lower than typical buildings due to the radiant effect of the floor directly warming occupants, while the ambient air temperature can be lower. In the summertime, the solar capture effect efficiently stops solar gains wherever the sun strikes the active floor. There is a noticeable absence of ‘sun heat’ in spaces that are brilliantly lit by the sun’s rays.

Of particular effect was before and after scenarios in the passenger inspection line area (security checkpoint) where hundreds of people wait in a fully glazed area with a low ceiling. Solar gains and people loads rapidly cause the ambient temperature to rise to a point where the air handlers could not keep up. Once the active floor was in full operation, the active floor dropped ventilation cooling loads and the associated high air flows substantially. Overall, the central plant operators have noted that chiller load dropped off 25 per cent once the cooled floors were fully operational.

Russell Lavitt, P.Eng., is with Stantec Consulting Ltd. He was the mechanical engineer-of-record on the Winnipeg James Armstrong Richardson International Airport–Terminal Building project.

The LEED Silver Winnipeg James Armstrong Richardson International Airport is heated using high efficiency natural gas-fired hot water boilers. High temperature water (180/82C) is pumped from the Central Utilities Building (CUB) via a 3200-foot (one km) long utility tunnel to the terminal building where it is used in a thermal cascade configuration. The high temperature water feeds high output heating elements such as entry heaters, unit heaters, or baseboards in back-of-house areas. Water typically leaves these elements at 150F (66C) and is routed next to the air handling unit heating coils. Once used to heat outside air, this water is mixed down to typically 120F (49C) and routed to the active floor system when in heating mode. This water returns to the CUB at 100F (38C) and is used to condense water vapour in the boiler flue gases, increasing overall plant efficiency to 97 per cent The active floors are also coupled to a 90F (32C) heat pump condenser water loop which allows the active floors to operate on heat reclaimed from electrical rooms, tenants, and data centres when conditions warrant.