Where we’ve been and how we're preparing for more climate-friendly, mildly-flammable, alternatives.

After Billy Durant purchased the Guardian Refrigerator Company with his own money in 1918, he incorporated the business into General Motors (GM) and renamed it Frigidaire. By 1929, Frigidaire had sold over one million refrigerators, the only trouble was, the nasty nature of refrigerants like sulfur dioxide, methyl chloride and even ammonia, kept Billy awake at night. Thus, GM created a subsidiary company designed to monitor the exploration of alternative refrigerants.

One scientist, Thomas Midgley  fashioned a team of researchers that developed dichlorodifluoromethane, branded Freon 12 (R-12). Midgley, a shameless self-promoter, loved to boast the compound was completely safe. So much so, he demonstrated his claim publicly by inhaling a lung-full of R-12 and then exhaling the chemical onto the flame of an open candle. No fire, no explosion, and Midgley was unharmed. Must be safe, no?

The chemical was deemed safe, but unbeknown to anyone, including Midgely, the Ozone Layer was being attacked.

As residential air conditioning became more popular and affordable in the early 1980’s, some air conditioner manufacturers opted to provide three-piece systems charged with R-22 refrigerant. The evaporator coil contained a vapour holding charge with the bulk of the charge contained in the outdoor unit.

Contractors would purchase a pre-charged, pre-insulated copper interconnecting line set of the appropriate length and size for the job. These pre-charged systems were popular since no brazing or system evacuation was necessary.

To avoid some of the problems associated with pre-charged line sets, some contractors (including this one) would purchase a ZERO-kit containing just the brass connectors and then fabricate a line set to manufacturers’ specifications out of bulk copper and better-quality insulation, even sweating elbows when needed to make a neat and tidy installation.

By connecting the evaporator coil section to the field fabricated tubing, I would pump a deep vacuum into the suction line, liquid line and the evaporator coil. I would then pressurize the evacuated components with vapour to bottle pressure before connecting to the outdoor unit thus releasing the bulk of the charge into the fully open system. Once started, I would charge the capillary tube metering system to superheat.

I mention all of this because, from my experience, too many pre-charged systems were overcharged. At start-up, refrigerant regularly needed to be released from the system; in fact, one manufacturer even provided a chart informing the installer how many seconds to leave the suction service valve open to the atmosphere so the charge might be corrected for a specific set of components.

Many service calls to malfunctioning units required vast amounts of R-22 be removed from the unit after a previous servicer loaded the poor machine with enough R-22 for several units.

Because the prevailing theory among poorly trained servicers was that to stop the evaporator coil from icing over just add more R-22. “Pump it in until you get 70 on the blue gauge.”

Midgley convinced HVAC/R practitioners (as well as those using chlorinated refrigerants as blowing agents) that atmospheric discharges of his invention were harmless.

Refrigeration textbooks of my era stated, “Saving the refrigerant is not recommended in small systems. The low cost of the refrigerant does not justify the time it takes to store it. The service technician may exhaust it into the air or into an approved exhaust system…never into a sewage disposal system.”

Of course, the technician was warned to use goggles and gloves especially when venting to the atmosphere. Such a waste.

As our industry quickly rushed to sell the benefits of central cooling (and there are many benefits), the complex relationship between a well-designed and properly installed duct system and the refrigeration unit meant to operate in conjunction with it was not fully understood.

Far too often, this one seemingly insignificant shortcoming led to premature system failures often caused by overcharging. Inevitably, quantities of chlorinated refrigerant large and small were regularly “vented to the atmosphere.”

Recent scientific studies show the ozone hole in the Antarctic has closed. Certainly we’re doing the right thing by eliminating chlorine from refrigerants.

By recovering refrigerants, even from the smallest systems, the efforts started in 1988 to reduce this type of environmental damage have also been taken seriously.

There’s no going back. Refrigerant recovery equipment is now an important tool in every technician’s and installer’s kit. Unfortunately, refrigerants continue to escape into the atmosphere, most often through system leaks, physical damage and by fires.

Although the ozone depletion problem has been largely put to bed, scientists worry about refrigerants causing further damage by contributing to global warming.

Chlorinated refrigerants such as R-12 were phased out in the 1990’s and hydrochlorofluorocarbons (HCFCs) are either phased out or in the process. The most common replacement refrigerant for HCFC-22 is a hydrofluorocarbon (HFC). Even though its Ozone Depletion Potential (ODP) is zero, R-410a has an uncomfortably high Global Warming Potential (GWP) of 2088. To counter the ODP/GWP conundrum, scientists and engineers are developing better methods of using some of the chemicals Midgley worked so diligently to dismiss as too dangerous for public consumption.

Natural refrigerants such as ammonia and CO2 along with hydrocarbons such as propane (R-290) and isobutane (R-600a) are back in specialized applications that incorporate new safety standards aimed at equipment designers, installers and technicians. 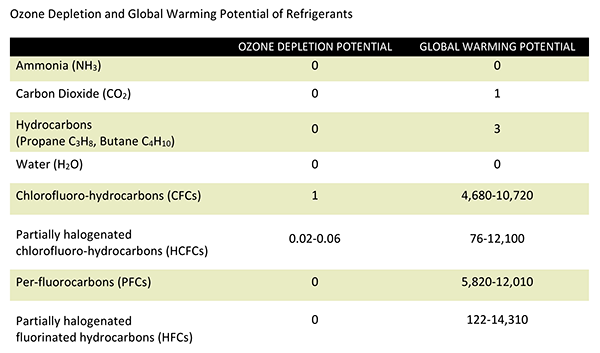 As time goes on, aging units containing HCFC and HFC refrigerants will need to be replaced. I’m thinking our industry will make a concerted effort towards adopting man-made lower GWP products. Hydrocarbon refrigerants are not likely to be used in residential and commercial air conditioning applications, at least in the near term. Why? Standards developed by ASHRAE and ULC specify the amount of system charge that might be released into a given area based on the Lower Flammability Limit (LFL) of the refrigerant.

Too much flammable refrigerant leaking into too small an area could see the LFL reached; in the case of R-290, the LFL is 2.1% in air. Systems requiring large volumes of R-290 or R-600a are simply too dangerous. However, I had no qualms with my recent purchase of a chest freezer containing 1.6 ounces of R-600a. A mere 1.64 ounces leaking into the 8,000 cubic foot area of my house means the LFL will never be reached.

So, What’s The Problem?

Developing a refrigerant which meets environmental standards, behaves in a traditional manner within most systems, and is relatively safe to use is the proverbial tall order. ASHRAE Standard 34 classifies refrigerant toxicity and flammability classifications:

Handling any refrigerant requires the use of ingrained safety practices. With A2Ls, concern about flammability and toxicity should still be top of mind, consider these points: 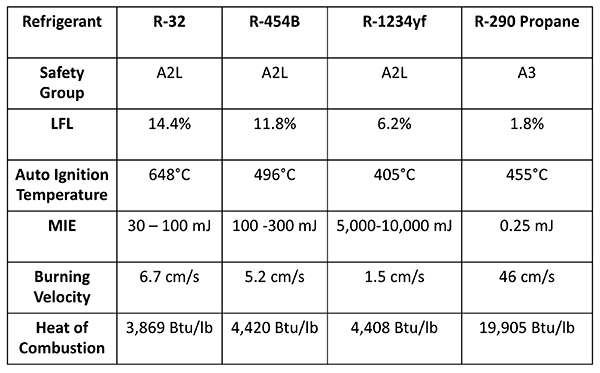 What Changes Will Happen?

The U.S. Environmental Protection Agency is authorized to phase down the production of HFC refrigerants starting this year. Initially, manufacturers of high GWP HFCs like R-134a, R-410a, R-404a among others, were required to phase down production by 10% on January 1, 2022.

By 2024, a 60% phase down will be enforced and, no doubt, the price of such HFCs will become astronomical. Even the newest refrigerants such as Honeywell’s Solstice and Chemours Opteon XL41 HFO/HFC blend (Hydro Fluro-Olefin) are still considered to be transitional refrigerants: until the GWP number gets much closer to zero, the scientists will keep on looking.

As of this writing, R-454B and R-32 will most likely be adopted for use in residential and commercial air conditioning applications. Carrier and Johnson Controls have announced plans to build equipment based on R-454B while Daikin, Lennox and Panasonic prefer R-32.

While pure R-32 is an HFC refrigerant, it’s lower GWP (675) makes it suitable for use in residential and commercial applications.

NOTE: A2L refrigerants are NOT drop-in replacements. They can only be used with equipment specifically designed for them within designated applications as determined by the equipment manufacturer.

So far, A2L units can do anything R-410a units have been doing. R-410a, classified as an A1 refrigerant, is a blend of R-32 with R-125 added to suppress flammability but unfortunately exacerbates the GWP problem (see Figure 3).

As with anything new, some of your everyday HVAC activities will have to change, but not so much. Installation procedures for A2L equipment are like those of A1 products although everyone must abide by manufacturer’s instructions, governmental regulations, and local codes.

Obviously, anyone handling A2Ls must take the appropriate training offered by manufacturers, trade schools, and organizations such as HRAI and ESCO.

Many of the tools used by techs and installers currently working with R-410a will be suitable for use with A2Ls including gauge sets, manifolds, and scales. Tools such as leak detectors, recovery machines and vacuum pumps will have to be rated for use with A2Ls.

Figure 4 is a chart of some additional A2L requirements and differences. Take note, because these changes are coming so it’s best to be prepared. <> 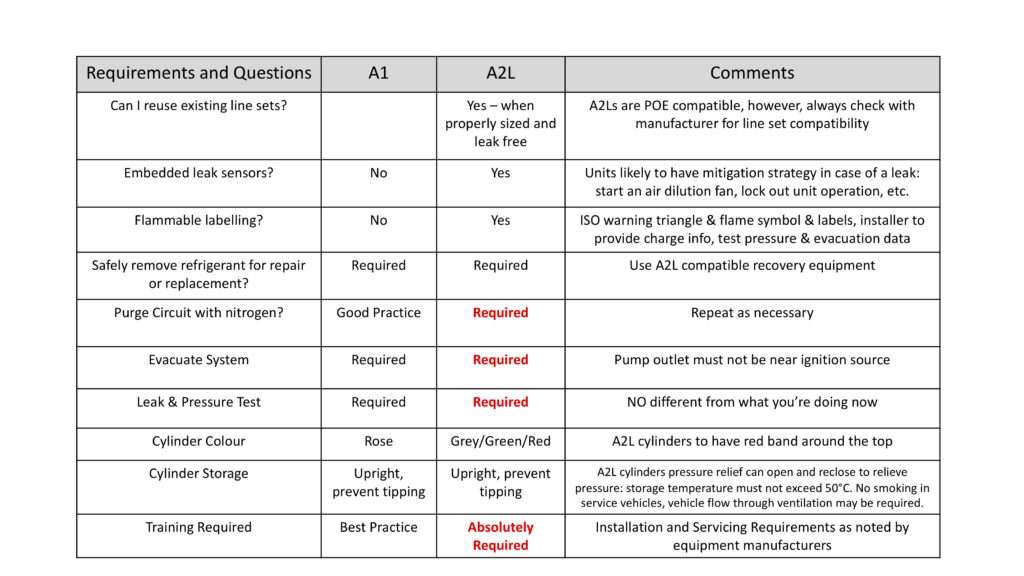 Ian McTeer is an HVAC consultant with over 35 years of industry experience. He was most recently a field rep for Trane Canada DSO. Ian is a refrigeration mechanic and Class 1 Gas technician. He can be reached at imcteer@outlook.com.