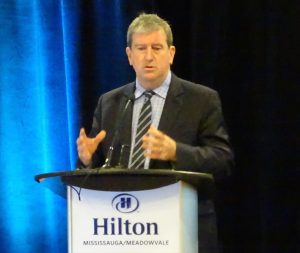 Building partnerships was a central motif running through much of the second day of the Ontario Geothermal Association (OGA) conference, an event held February 21-22 in Mississauga, ON.

Those themes emerged during the keynote presentation February 22, as Glen Murray, Minister of Ontario Environment and Climate Change, discussed geothermal’s role in the Climate Change Action Plan. To support the plan, a new Low Carbon Deployment Agency will oversee investments in commercial, industrial and residential buildings, Murray said, with a focus on technology supporting zero-GHG buildings. The agency will provide funding and manage programs for major building retrofits.

“That’s where the geothermal industry comes into focus, because geothermal technology—pipe loops, the entire infrastructure of heat pumps—are foundational components of low-carbon buildings and net-zero buildings,” he said.

As well, several net-zero subdivisions have emerged in the last year, Murray said. The actual cost of hooking up geothermal isn’t higher, he noted, but the province lacks the financing and utility models to make them less expensive. Therefore, Murray noted the province and geothermal industry should collaborate on identifying barriers and establishing regulatory changes.

Providing an example of geothermal heat pump use helps to reduce GHG emissions Martin Forsen, manager, international affairs, NIBE, described Sweden’s energy system and the country’s experience with the pumps. The EU’s target is that renewable energy use should reach 20 percent by 2020; GHG emissions should fall by 20 percent compared to 1990; and efficiency improvement should hit 20 percent. Many of those targets should be met, Forsen noted, with Sweden hitting 50 percent renewable energy. “And this is quite a large contribution from heat pumps,” he said.

Sweden’s large-scale implementation has meant that, since 1990, over one million heat pumps installed with more than 50 percent of households using them. Oil use for heating has fallen by over 90 percent, while electricity for heating has dropped 29 percent. Meanwhile, greenhouse gas emissions related to heating have fallen by 90 percent. “It really has solved the problem,” Forsen said.

During a regulatory update Martin Luymes, director, programs/relations, HRAI, described the OGA’s activities over the past year, which he called “a year of productive conversations.” The organization had spoken with several groups, including Minister Murray and staff. It’s also important not to rush the Climate Change Action Plan and that government communication with the industry was crucial, he said. “Let’s not get too excited about flowing money before the time has come,” Luymes said. “The key to all of that, I believe, is communication. It’s important for the government to communicate effectively with the industry prior to communicating directly with the public.”

The OGA also presented during proceedings before the Ontario Energy Board, after natural gas industry requests to expand infrastructure into parts of Ontario and questions arose regarding when ratepayers should subsidize the expansion, said Luymes. OGA witnesses made the case for geothermal as an alternative. “From the perspective of the geothermal industry they won the case in the sense that the board decided to disallow any subsidies from existing ratepayers to new rate payer communities,” he said, adding the Ontario government said it would step in to help cover expansion costs.

The OEB hearing helped pave the way for productive discussions with Enbridge Gas Distribution, Luymes said. Some of those discussions have focused around the utility investing in geothermal loops. As well, recently concluded partnership discussions with Enbridge have led to an agreement for the OGA and utility to work together. “We’ve been making the case already that it’s really important to get this partnership right,” he said.

Speaking next was Malini Giridhar, VP of marketing development and public and government affairs at Enbridge Gas Distribution, who also stressed the importance of partnerships. Through the Climate Change Action Plan, Enbridge has the opportunity to further supplement their core natural gas systems with lower carbon technologies like geothermal, Giridhar said. Funding and the right regulatory framework were also necessary to make that happen, Giridhar said. But higher costs and lower customer demand can slow adoption of these technologies, with subsidies often bridging that gap temporarily. “The key is to convert the subsidy into a sustainable cost advantage,” she said.

The utility wants to support different energy solutions for different applications, leveraging their financial model and brand along with the geothermal industry’s expertise to overcome entry barriers, Giridhar said. Enbridge is looking to invest in the loops, meaning the utility would own the connection up to the heat pump. Enbridge’s vision is that pricing will look to funding from the province. “The partnership becomes really important, because we can’t achieve on our own the adoption of geothermal by just addressing the loop,” Giridhar said. “We need to make sure the whole package is seamless for the customer.”