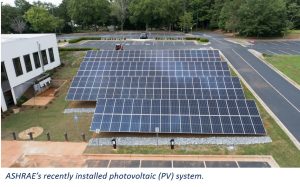 ASHRAE will operate at net-zero-energy (NZE) performance following the recent installation of a large photovoltaic system at the company’s new global headquarters.

In January 2020, ASHRAE began a $20 million renovation project on its new global headquarters building, located in Georgia. Built in 1978, the existing building became a demonstration project intended to prove the economic viability of a NZE operation.

Completed through Creative Solar USA, the 332kW project was a combination of three sub-arrays:

The total system size had to be constrained within the maximum cap set by the local electric utility provider for anyone wishing to interconnect through the monthly netting program.

PV systems such as the ASHRAE’s offer approximately 25 years of performance. The addition of power optimizers, which are small devices that sit behind the panels and are paired to the SolarEdge inverters, mitigate the effect of partial shading, increase safety, and allow ASHRAE to monitor performance down to each individual solar panel.