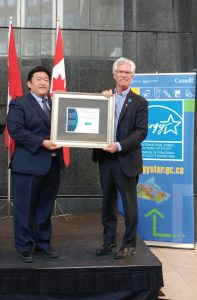 LG Electronics Canada (LG) was named Manufacturer of the Year HVAC at the 2016 ENERGY STAR Canada Awards ceremony held May 24 in Winnipeg, MB. The Honourable Jim Carr, minister of natural resources, presented the awards to select companies for innovations in energy efficiency.

Efficiency Nova Scotia was in the winners’ circle for the second time. The non-profit was named Advocate of the Year at the 2016 ENERGY STAR Canada awards – a recognition it also earned in 2013.

Stephen MacDonald, chief executive officer of EfficiencyOne, the company that operates Efficiency Nova Scotia, accepted the award. “It’s a tremendous honour for Efficiency Nova Scotia to once again represent Nova Scotia on the national stage as a 2016 ENERGY STAR award recipient,” said MacDonald. “We know that Nova Scotians are leading by example when it comes to saving energy, and the incredible people who work in our energy efficiency industry are all advocates for doing the right thing. Saving energy is the right thing to do – for our budgets, our economy and our climate.”

The ENERGY STAR program is a voluntary partnership between the Government of Canada and over 2000 organizations that manufacture, sell or promote ENERGY STAR-certified products and homes.

The ENERGY STAR name and symbol are administered and promoted in Canada by NRCan and are registered in Canada by the United States Environmental Protection Agency.