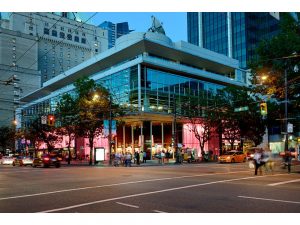 Robson Central in Vancouver, BC.

Healthcare of Ontario Pension Plan, or HOOPP, awarded Morguard Investments Limited for its sustainable properties in Vancouver, BC and Calgary, AB.

Morguard was presented the Energy Saver: Performance Award for reduction in energy consumption at Robson Central in Vancouver, BC.

The HOOPP Leap Award recognized a 20 per cent reduction in normalized energy intensity in 2017 compared to the previous year. Robson Central – a 130,000-square-foot, Class A office building – had an energy-spend of 5.42 equivalent kilowatts per house per square foot, down from 68.6 in 2016.

The company was also awarded Tenant Leader: Commercial for collaboration with the property manager at 11th Avenue Place in Calgary, AB and the tenant, BluEarth Renewables.

The building underwent renovations such as the installation of electrical vehicle charging stations and utility sub-metering for energy consumption readings, among other updates. Built in 2015, the 200,000-square-foot, Class A, office building, is pending LEED Gold certification.

Morguard has received 14 distinctions across nine categories since its initiation in 2012. 2018 marks the third consecutive year that it has received recognition in the Tenant Leader category.