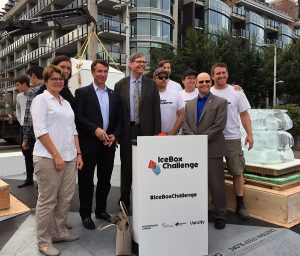 After 18 days in the sun, the Passive House structure retains 639 kg of ice compared with the BC code-built house which retained 407-kg.

Launched on July 27, Vancouver residents and visitors were invited to learn about the Passive House Standard—the energy-efficient building design standard that requires almost no energy for heating or cooling—through a public display/science experiment called the Icebox Challenge.

Two structures were placed at Olympic Village Square—one built to B.C.’s current building code and one to the super-insulated to the Passive House Standard.

Almost one tonne of ice was placed in each structure, and people have been entering their guesses online about how much ice would remain on August 14.

The results are in, and the Passive House structure wins, retaining 639 kg of ice, compared with the BC code-built house which retained 407-kg of ice.