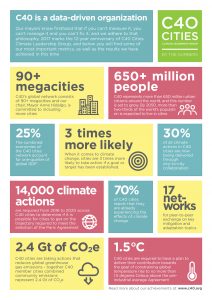 Mayors of Toronto, Montreal and Vancouver have signed on to a global agreement comprising 19 cities to meet net-zero carbon standards by 2050.

Leading up to the Global Climate Action Summit, to be held in San Francisco, CA, C40 urged cities to step up their climate action and ambition–the declaration is one of the city commitments under that initiative.

Of the 19 cities, 13–including Montreal, Toronto and Vancouver–will take extra steps as part of a commitment to owning, occupying and developing only assets that are net-zero carbon by 2030.

These steps include evaluating current energy demand and carbon emissions from municipal buildings, and identifying opportunities for reduction; establishing a roadmap to reach net zero carbon municipal buildings; and reporting annually on progress.

“We are excited to be signing the C40 Net Zero Carbon Emissions Declaration along with other major cities around the world,” said Vancouver Mayor Gregor Roberston. “Vancouver’s Zero Emission Building Plan will not only reduce GHG emissions from new buildings by over 60 per cent but is also driving our green economy with a 53 per cent increase in green building jobs since 2010.”