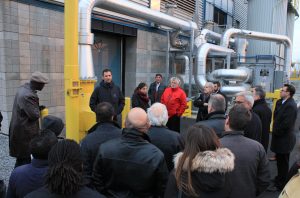 The Biomont Energie cogeneration plant is located near the limits of the Frederick-Back Park, inside the Saint-Michel Environmental Complex in Montreal, QC. This site is well suited for the recovery of biomethane gas emanating from a former landfill that was covered in 2014. The gas is transformed into electrical power (4.8 MWs), which is being sold to Hydro-Quebec, while at the same time providing heating (5.2 thermal MWs) to the nearby Tohu and Cirque du Soleil facilities.

The Biomont project plays an important role in the rehabilitation plan of the neighbourhood. Frederick-Back Park, whose first section has just been completed, covers the old Miron quarry. The quarry was transformed into a landfill site in 1968 and has been closed to putrescible waste since 2000.