How homeowners have responded to Ontario’s CO alarm law 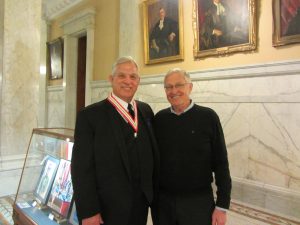 John Gignac (l) with Oxford County MPP Ernie Hardeman after being named to the Order of Ontario.

The Hawkins-Gignac Foundation commissioned a Home Owners’ CO Awareness Poll to provide insight into how Ontarians have been impacted by the new CO alarm law prior to CO Awareness Week, which runs from November 1 to 7.

The Ipsos Poll found about half of Ontarians have been impacted by Ontario’s new CO Alarm law which became enforceable in April of 2015.  Fifty-six per cent of homeowners acknowledged being moved into action by either researching for more information, purchasing carbon monoxide alarms, paying more attention to possible risks or recommended others to take action.

The poll found two in 10 (18 per cent) of Ontarians are unaware of the carbon monoxide alarm law and a full quarter of homeowers (26 per cent) has not done anything new, despite being aware of the law.  The law mandates the installation of carbon monoxide detectors outside sleeping areas in all homes that have any type of fuel burning appliance or an attached garage.

“The poll findings show the message is starting to get out, but there’s still a lot more work to be done. Our goal is to see every household in the province, that’s at risk of CO, protected, and eventually, to see uniform standards for all homes across Canada,” said John Gignac, executive director, Hawkins-Gignac Foundation for CO Education.

“Educating homeowners that CO alarms need to be replaced is a major area of focus for us,” emphasized Gignac. “The knowledge gap around replacement was one of the major findings in the poll we conducted last year. It showed close to 80 per cent of all Ontario residents are misinformed about CO alarm replacement.  The misperceptions are especially true for hardwired alarms.”

Filling the replacement void is something Ontario’s CO Alarm law addresses specifically. The law actually mandates that CO alarms must be replaced within the timeframe indicated in the manufacturer’s instructions or on the label on the unit.   In today terms, that means any CO alarm in the home made before 2009 must be replaced whether it is plug-in, battery-powered or hard-wired. The general rule on CO alarm replacement is to install new units every seven to 10 years.

According to Sean Simpson, a spokesperson and analyst with Ipsos, what is most encouraging about the latest poll is that a majority of Ontarians say, as a direct result of the new law, they are beginning to take action.  Four in ten (44 per cent) say they have bought a carbon monoxide alarm for their home, while only four in 10 (34 per cent) who are aware of the law say they have not, which could either be due to negligence, the fact that they already had a carbon monoxide alarm installed, or that their home is not mandated to have one.

Many Ontarians want to be more informed about the impacts of carbon monoxide, with nearly one in three (28 per cent) saying the implementation of the new law has made them search for more information about the sources, symptoms and dangers of carbon monoxide. The Hawkins-Gignac Foundation continues to focus on awareness, having just completed its latest work, a public service announcement featuring the Honourable Elizabeth Dowdeswell, the Lieutenant Governor of Ontario.


Related Stories
Charges to be laid in Toronto for disabling a carbon monoxide alarm
CO alarms mandatory in all Ontario homes
Co-operative launches CO monitor give away with maintenance signup
Bathroom renovations, small repairs focus for homeowners in 2018: poll