Armstrong Fluid Technology announced at its Global Energy Summit in Toronto that the company is committed to reducing GHG among its installed customer base by two million tons by the year 2022. When making the announcement on June 19, Armstrong’s CEO Lex van der Weerd, issued a challenge to industry participants to set similarly aggressive targets for the same four-year time frame.

“Organizations globally are being driven to achieve a zero footprint future. We believe this can best be achieved through key stakeholders focusing on solutions and timelines that will make zero footprint a near-term reality,” said van der Weerd. “We are both inviting and challenging all organizations to join us in pursuing the goal of zero footprint operations.

The GHG reduction would be equivalent to taking 600,000 cars off the road or offsetting the average annual CO2 emissions generated by 100,000 people.

“While aggressive, we believe this goal is absolutely achievable,” emphasized van der Weerd. “We have spent the last several years developing technology solutions that conserve energy and water, improve system efficiencies, and deliver strong and often immediate economic returns both on installed cost and operating cost that provide significant reductions in GHG emissions.”

Armstrong has already launched a global validation effort across a wide range of customer types and applications with the results being validated by Bureau Veritas. The company is also significantly expanding its team of energy-savings specialists that will work closely with existing customers to measure, manage and enhance their current operations. 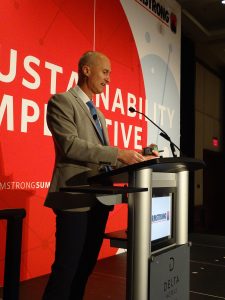 Geoff Cape is founder and CEO of Evergreen, a Canadian charity, and Evergreen Brick Works, a community environmental centre in Toronto.

Customers among the attendees included facility managers, engineers, mechanical contractors and system designers. Speakers addressed issues from IoT to energy upgrades to efficiency programs, all with a focus on sustainability.

On June 20, Geoff Cape of Evergreen opened the day with a discussion on working to build a collective vision for urban development. This would be achieved working across all sectors.

“We need to plan like we’ve never planned before,” said Cape.

He went on to describe the passive heating and cooling system that was installed at the refurbished Brickworks in Toronto, ON and explained how human cooperation was vital to the system’s performance.

“The systems that are coming will require [people’s] engagement.