The annual report by Efficiency Canada, a research group based at Carleton University, benchmarks all Canadian provinces and territories across 54 metrics, such as energy savings from public utility programs, electric vehicle registrations, building code adoption, and industrial energy management. 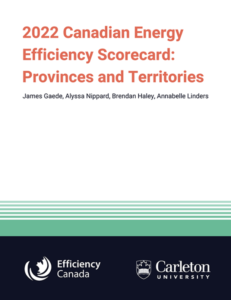 As the cost of living rises and concerns about emissions grow, there’s a renewed interest in energy efficiency. But funding remained static in the provinces and territories in 2021, according to this year’s Canadian Energy Efficiency Scorecard.

However, James Gaede, research manager and co-author of the report, says recent policy and programming announcements suggest a change could be on the horizon.

“The Scorecard looked at data from 2021. But our policy tracking shows a number of provinces turning to energy efficiency to deal with new and growing challenges like energy supply shortages and rising energy bills,” said Gaede.

Meanwhile, New Brunswick and Nova Scotia are planning to increase energy efficiency savings from fossil fuels, with an emphasis on low-income households.

According to the Scorecard, getting there will take more than incentives. “We need regulations – starting with making every new building highly energy efficient,” says Brendan Haley, director of policy research and co-author of the report.

Last March, the federal government released the 2020 National Model Codes, which include performance levels that progress towards making new buildings so energy efficient they can easily supply their own energy needs (net zero energy-ready).

So far, British Columbia, Yukon, Prince Edward Island and New Brunswick have committed to this goal. Few jurisdictions have plans to adopt the codes on an accelerated timeline.

A little help from the feds

The report also discusses the federal government’s role. One of the Scorecard’s key recommendations is for the Government of Canada to expand low-income energy efficiency programs.

The federal government has created programs through the Greener Homes Initiative and the Canada Infrastructure Bank that bolster provincial efforts. But gaps in these programs exclude more than 4.5 million Canadians. The largest barrier is the upfront cost of the retrofits, which can be too expensive for many to afford.

For more information on the Scoreboard, visit efficiencycanada.org.