Celebrating a half century of joining technology 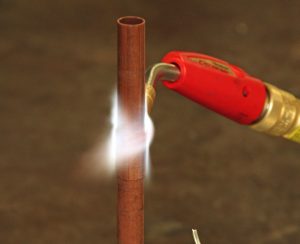 The “wrap around” effect of a TurboTorch Extreme Swirl tip is designed to distribute heat on all sides of a joint.

TurboTorch, an ESAB brand, is celebrating its 50th anniversary in 2017. TurboTorch was the brand name for the air-fuel products introduced by Wingearsheek, Inc., of Peabody, MA. The products featured a patented air-swirl technology invented by company co-founder Alex Wormser. Burning hotter than other air-fuel torches, TurboTorch’s Extreme line of self-lighting and standard torch tips create a “wrap around” flame effect to heat pipe evenly and quickly. By the early 1970s, air-swirl technology became popular for brazing and soldering.