The CMPX 2016 show committee and HRAI president Warren Heeley have announced that Nico Marcantonio of Pac Heating & Air Conditioning in Welland, ON, is the winner of the new Chevrolet City Express LT van with custom racking interior by Farmbro. The prize was awarded on April 15 at Applewood Chevrolet, Buick, GMC Cadillac in Mississauga, ON. 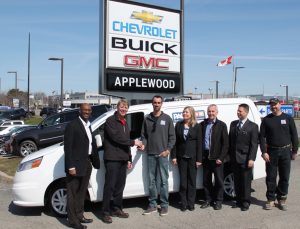 Marcantonio attended the CMPX 2016 show as part of a group of guests brought to the show by Bardon Supplies Limited. The draw for the van was held at the close of the CMPX show. The winner was then required to answer a skill-testing question and had to be determined to be a legitimate and properly qualified winner according to the contest regulations.

The contest was an important part of the show promotional program that delivered a significant attendance increase in 2016. Show organizers reported an 8.4 per cent increase in attendance over 2013 at 14,738.