February marks the second straight month of record growth due in large part to the residential sector. 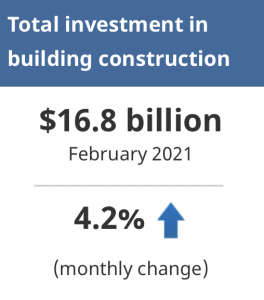 Statistics Canada has announced investment in building construction in February 2021 achieved the second straight month of record growth due in large part to the residential sector.

Seeing a 4.2% increase to $16.8 billion, roughly half of the gain in construction investment on a year-over-year basis is thanks to price increases. Reports say this elevation likely reflects rising demand and tightening supply for building materials since the start of the pandemic.

Rising for a fifth consecutive month is residential construction, up 9.4% to $6.7 billion in February. Experts say the strength of single-family home investment in recent months is because of increased demand for more living space as Canada approaches the end of the first year of the pandemic. Also seeing growth was multi-unit construction investment which increased 1.6% to $5.7 billion in February. Investment in Ontario for this sector increased for a 10th consecutive month. Saskatchewan joined in on the fun seeing a 69.4% rise in this sector, thanks to new projects in Saskatoon’s University Heights Suburban Centre.

Commercial building construction investment remained at $2.5 billion for the fifth consecutive month, thanks to declines in seven provinces.