The Geo’s concept was inspired by the City of Kingston when it became the first municipality in Ontario to declare climate change as an emergency in 2019. 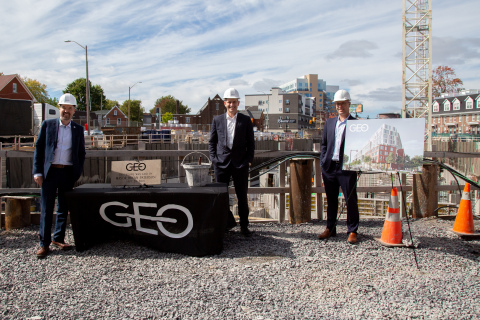 A cornerstone laying ceremony was held recently in Kingston, ON for the city’s first large scale geothermal residential building, the Geo. The stone was laid by Mayor Bryan Paterson.

The Geo’s concept was inspired by the City of Kingston when it became the first municipality in Ontario to declare climate change as an emergency in 2019.  With the aim to improve energy efficiency and reduce reliance on fossil fuel, the Geo will utilize geothermal energy to reduce greenhouse gas emissions produced by the building by over 70%.  This will ultimately lower utility costs for its future residents.

The Geo is the result of a partnership between Podium Development Corp., Secure Capital Partners Inc., Blue Vista Capital Management Developers and OPTrust, one of Canada’s largest pension plans. The consortium also partnered with Diverso Energy for design, build/install and operation of the geothermal system.

“Our team is focused on leading positive change for lower carbon buildings. This is Kingston’s first large-scale geothermal building, but it will not be the last,” said Bernard Luttmer, Podium Developments’ managing director. “Our portfolio of new multi-family projects planned in Kingston and throughout Ontario are all being designed with innovative technologies to help us reach a net-zero carbon future.”

The Geo will add 344 rental units to the city’s inventory. Situated in a redeveloped brownfield infill site, the Geo is centrally located and a short walk to both Queen’s University and downtown Kingston. Once complete, it will rise to 10-storeys and feature ground-floor retail as well as a corner parkette.