Stanley Black & Decker Canada introduced a number of new-and-improved power and hand tools to the media January 24 to 26 at Mont-Tremblant, QC. The firm dubbed this event ‘Avalanche’ and it lived up to the name with a veritable avalanche of new products debuted in a high-energy, trade show atmosphere.

The product announcements went beyond the Stanley and Black & Decker brands to include new products from DeWalt and Porter Cable – all part of the tool conglomerate’s Global Tools & Storage Group. However, the main focus was the continued development of DeWalt’s high-powered professional cordless tools: building on what the company calls the Cordless Jobsite.

The Cordless Jobsite idea is getting enthusiastic reviews from Kiefer Limeback, an Ajax, ON contractor who has nearly 90,000 Instagram followers of his off-the-cuff video tool reviews (posted as ‘Toolaholic’). Limeback – a guest at the event as both a media personality and as a working contractor – praised the new generation of DeWalt’s extended run time batteries which, in combination with new brushless motors, offer as much power as corded versions. Limeback noted that these products offer more than mere convenience; they offer quicker set-up and teardowns each day.

The 20V Max XR Versa-Clutch Adjustable Torque Screwgun (model DCF622) allows the user to dial-in just the right amount of torque required for effective fastening of metal-to-metal components of various gauges, with the added advantage of preventing breakage of any sealing washers made of softer materials. 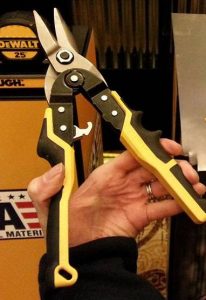 The DeWalt Ergo Snips have a reduced opening span that reduces muscle strain while cutting the same amount of material per squeeze. Available also in right and left cuts.

DeWalt, once known strictly as a power tool brand, has moved steadily into the hand tool segment in recent years. The brand is evolving with improved designs resulting from DeWalt’s partnership with U.S. Ergonomics. The new hand-operated DeWalt Ergo Snips metal shears (available in June), for example, benefit from a reduction in muscle strain of as much as 15 per cent, due to a significantly reduced initial handle span for an easier starting point before operation, yet they cut the same material with each squeeze.