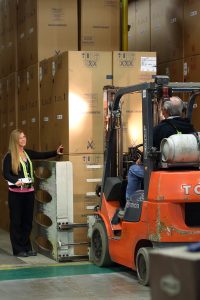 All forklifts in the distribution centre were equipped with catalytic converters to prevent any build-up of carbon monoxide from forklift exhaust.

The employees of A. O. Smith Corporation’s offices and distribution centre in Fergus, ON, have been presented with the Lloyd B. Smith President’s Safety Award for excellence in workplace safety.

President and CEO Kevin J. Wheeler praised the Fergus team for their efforts, noting they were the first Canadian facility to earn the award in the company’s 63-year history.

“Many people think of safety as a factory-only activity, but this team knows better,” Wheeler said in presenting the award during a special ceremony at the facility. “You have done a remarkable job of identifying possible hazards, preventing accidents, and continually improving the working conditions in the Fergus facility.”

The award is given annually to the A. O. Smith facility that achieves the best overall performance in workplace safety during a calendar year. A total of 23 locations worldwide were evaluated based on statistical measures as well as evidence of having a comprehensive, sustainable workplace safety program.

To earn the Lloyd B. Smith President’s Safety Award, each company facility is evaluated based on three statistical categories:
• Lost workday case incidence rate: This measure relates to the most serious, work-related injuries or illnesses that result in one or more lost work days;
• Recordable case incidence rate: Recordable incidents are significant, work-related injuries or illnesses beyond first aid as defined by the U. S. Occupational Safety and Health Administration (OSHA); and
• Lost workday incidence rate: This category measures a facility’s total number of lost work days and provides a measure of accident severity.
Fergus employees have spent a great deal of time focused on the special safety needs of a distribution facility, according to operations manager Robert Henderson. Among the projects were the implementation of a new emergency management plan, an enhanced forklift safe driving program, and a pedestrian awareness Kaizen event.

Spearheading the efforts is the Fergus Joint Health and Safety Committee co-chaired by Mary Shannon and Emerson Woods with members Paul Schwantz, Joanne Whitney, Garfield Smith, and Henderson. The team meets monthly to review safety data and any trends in the facility as well as to discuss safety training. The team also conducts monthly inspections throughout the facility to identify potential hazards or unsafe working conditions.

“During 2016, the committee did a lot of work to improve safety processes in the plant,” Shannon observed. “They revised accident reporting process that includes near misses. The process is designed to identify the root cause of the accident or near miss and develop a corrective action that everyone involved must sign off on.”

All data are entered into an online dashboard that is available to every manager and supervisor in the facility. In the event of an accident or near miss, all managers and supervisors receive email notification of the incident.

Employee involvement in the facility’s safety initiatives is encouraged. Fergus installed a new dock lock program to prevent trailers from pulling away from a loading dock during loading or unloading. Employees took part in the Kaizen event to determine the new equipment that was installed on all the docks as well as the improved process. A Kaizen team also was formed to review pedestrian safety in the warehouse and distribution centre and develop new rules for employees walking through the area.

Over the last several years, the company has made improvements to the building to make Fergus more energy efficient. As part of this effort, the team retrofit all forklifts in the distribution centre with catalytic converters to prevent any build-up of carbon monoxide from forklift exhaust. They also conduct quarterly emission tests on all forklifts to maintain exhaust levels below legislated thresholds. As part of this effort, the team installed carbon monoxide detectors throughout the warehouse area.

“Safety is first and foremost in Fergus,” Henderson said. “No single water heater is more important than our people’s safety.”